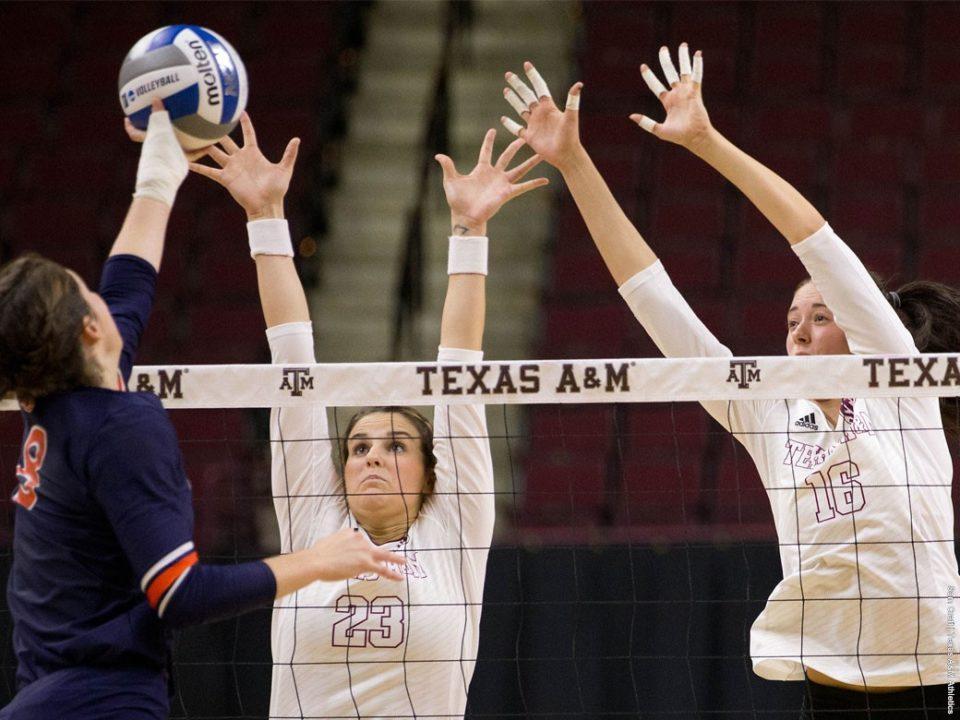 After scraping out a tight first set, Texas A&M roared to a sweep of visiting Auburn on Sunday. Current Photo via Texas A&M athletics

After scraping out a tight first set, Texas A&M roared to a sweep of visiting Auburn on Sunday.

Junior Ashlie Reasor notched 14 kills and hit nearly .400 (.391) to lead the Aggies, who were ranked #19 at the time of the match. (New rankings were released today, with A&M receiving votes but falling just outside the top 25).

Auburn got a nice 8-kill, 13-dig day from Brena McIlroy, and Gwyn Jones had 10 kills, but after a 24-26 loss in the opening set, Auburn fell off the pace and dropped two more quick sets to the home team.

Aggie junior opposite hitter Ashlie Reasor led all players with 14 kills while hitting .391, and freshman outside hitter Hollann Hansreached double-figure kills for a team-leading fifth consecutive match, pitching in 10. Junior outside hitter Kiara McGee and senior middle blocker Jazzmin Babers added eight kills apiece, and junior setter Stephanie Aiple kept the Tigers guessing as she contributed seven kills—one shy of her career-high—and also dished out 34 assists while directing the A&M offense to a 50-36 lead in total kills and a .270 to .123 advantage in hitting efficiency.

Defensively, Texas A&M junior libero Amy Nettles took match-high honors in digs with 16, and senior defensive specialist Victoria Arenas added 14 to help the Aggies to a 56-38 lead in team digs. Sophomore middle blocker Kaitlyn Blake had four blocks as she continued her streak of leading or tying for the A&M lead in blocks in every match this season, and Babers added three blocks to give her 471 blocks in her career, moving her into fifth place in the A&M all-time career records for total blocks.

The Aggies jumped out to an early lead in the opening set, using an 8-1 run to build a 12-5 lead. Texas A&M maintained its seven-point cushion at 17-10 before Auburn came storming back, outscoring the Aggies, 9-2, to tie the score at 19-19. The teams traded points and the score was tied at 22-22 when Auburn setter Alexa Filley got a kill to give the Tigers their first lead since 2-1.

Following an A&M timeout, Blake and Aiple had back-to-back kills to put A&M at set point, but Auburn’s Breanna Barksdale got a kill following the Tigers’ timeout to tie the score for a 10th time. The Maroon and White caught a lucky break on the ensuing play as Auburn hit an easy A&M overpass into the net to put the Aggies at set point for the second time. Texas A&M, which outhit the Tigers, .220 to .140 in the set, then closed out the frame as Aiple set up Hans for the clinching kill.

Texas A&M never trailed in the second set, although Auburn did manage to tie the score six times, including overcoming a 13-9 deficit by reeling off four unanswered points to tie the score at 13-all. Blake kept the Aggies in the lead, connecting for a kill on a ball that was popped up by Hans, and Aiple followed with a kill as the Aggies continued on a 6-1 rally to pull away.

Auburn, which was outhit, .417 to .257 in the set, got within 20-17 before Babers had a kill and Reasor followed with two of her six kills in the stanza to give A&M a 23-18 lead. Gwyn Jones ended the run with one of her team-high 10 kills in the match, but the Tigers then served into the net to put A&M at set point. McGee closed out the set, tooling the Auburn block for a kill and giving the Aggies a 2-0 set lead heading into the intermission.

A&M hit a match-low .176 in the final set but held the Tigers to a .000 hitting efficiency to complete the sweep. Auburn had tied the score at 8-8 before A&M used an 11-3 run to build a 19-11 advantage. The Tigers, however, fought back, outscoring the Aggies 7-2 to get within 21-18 and forcing an A&M timeout. Babers got a kill coming out of the timeout, and Auburn’s next attack sailed out to put the Aggies up, 23-18. The Tigers connected on a kill to get within 23-19 before Reasor got a kill from the left side, and McGee followed with the match-winning kill.

Texas A&M now begins a three-match road swing starting Sept. 30 at LSU. First serve is at 7 p.m. at the Pete Maravich Assembly Center in Baton Rouge, La. The Aggies continue their road swing at Arkansas on Oct. 5 and at Ole Miss on Oct. 9 before returning to Reed Arena on Oct. 14 to play host to South Carolina.

On keys to winning…
“Keys to the match were pretty much what we wanted to be keys to the match: serving and passing. Our passing was sharper than it’s been in a really long time. Our ball handling, the first touch that came to our side was allowing our offense to do the things that they needed to do. I think that we were able to find a way to keep the game at our pace and not super-fast like [Auburn] likes to play. It’s important that you establish on your side that you need to play well, and after a few times of missing that cue, we ended up doing a nice job of that.”

On using the match as a momentum builder…
“It’s a huge momentum builder for us. We don’t play again until Friday night, but it’s a nice time for us to have a few days to focus on Aggie volleyball. We got to do that a little bit this week, but with two matches to prepare for, you’re also doing a lot of work against your opponent. We have one opponent this week. That gives us time to rest and try to recuperate a little bit from some of our aches and pains. We played well. We made the changes that we have been working on making. That is all feel-good stuff and positive stuff that perpetuates in the brain that ‘this is so fun, this is so good. We are only going to get better’ as opposed to ‘oh my gosh what are we going to do now? We have to make so many changes.’ So it is huge for the momentum and for the confidence of the team.”

On junior setter Stephanie Aiple…
“I would give props to Stephanie [Aiple]. We have changed our offense to super-fast to mediocre-fast, and now we are just changing things all the time. Certain hitters are starting to adapt to certain sets and get better results. Stephanie has to remember and execute what every hitter wants; the height, the speed, the distance, the location, and try to nail it every time. She makes all those decisions on the court. She has to take whatever passers give her around 900 square feet and make a decision and give it to somebody to make a kill and put it away. I think that setters often go unappreciated with the blocks, digs and running the offense and making all of the decisions. I think that we can’t overlook how important that position is and what a job she does for us. It is really important that we have consistency and talent in that position, and she provides that for us.”

On court performance….
“The execution was really good all the way around. They know that when they all come ready to play and ready to do their jobs, we can beat just about anybody.”

On bringing fight to this match…
“I think at the end of the Alabama match, we were neck-and-neck with them, we were fighting hard. Although we didn’t get the outcome that we wanted, we did take a lot of positives out of that match. We came back on Saturday and had a great practice that prepared us for this game, so I think we did carry over a lot.”

On duplicating today’s’ performance…
“We haven’t had this feeling honestly since last season, I mean we had it in the preseason a little bit. I think this was just a really big team win. I think just remembering what that felt like in our heads and physically and reminding each other of that can really help us excel.”

On this past week’s practices…
“You can tell we are more focused. We knew what we had to get done leading up to these matches. You practice like you play, so we needed to up our practices a little bit.”

On playing SEC home opener at Reed Arena…
“It was really fun. We love playing for the 12th Man. It’s a great atmosphere to play in. I really wouldn’t want to play anywhere else with the band, yell leaders and everything. It’s nice to be home and play here for the fans.”

On her 14-kill performance against Auburn…
“I just knew that I needed to come in focused. The scout report really helped and let me see what I had open while hitting against this defense. I think we prepared pretty well, and thanks to Stephanie [Aiple] for giving me the ball.”

“With a team so balanced offensively like Texas A&M, you can’t give them easy situations and that’s what we did today,” head coach Rick Noldsaid. “We gave them too many free balls and they took advantage of that.”

Auburn (7-8, 1-1 SEC) was led by freshman Gwyn Jones with 10 kills, while sophomore Brenna McIlroy and junior Courtney Crable each had eight. Defensively, McIlroy had a team-best 13 digs and libero Jesse Earl finished with 10. JuniorMacy Reece totaled a season-best four blocks for the Tigers.

The Tigers found themselves down by as much as seven at 10-7 in set 1, but they inched their way back in the set. A kill from McIlroy sent the Tigers on a 5-0 run to tie the score at 19 and kills from Jones and Filley made it 23-22 Auburn. The Aggies battled back to earn set point and went on to take the first, 26-24.

The teams exchanged points to open the second stanza before a three-point Aggie run pushed the home squad to a 12-8 lead. The Tigers came back to tie the set at 13, but TAMU used a handful of small rallies to take a 23-17 advantage. The Aggies went on to take the set, 25-18.

A trio of Aggie errors put Auburn ahead 3-1 in the third, but TAMU responded with big blocks to go up 6-4. A kill by Crable locked the set at 7-7 before the Aggies capitalized on Auburn miscues to push a 11-8 lead. TAMU pressed another long run and held on to take the match with a 25-19, win.

Auburn continues SEC play on the road, traveling to Mississippi State and Georgia. The Tigers will take on MSU Friday, Sept. 30, at 7 p.m. CT. The team will follow with a 12:30 p.m. CT Sunday, Oct. 2, in Athens, Ga.