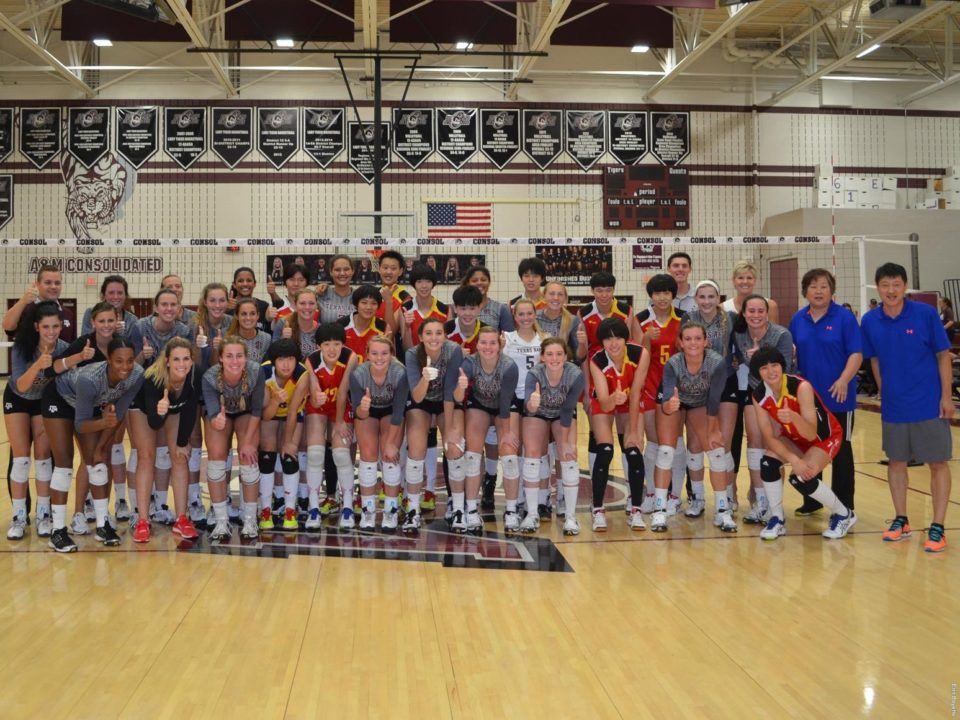 The Texas A&M Aggies got a unique cultural experience this week in an exhibition match with a team from China. Current Photo via Texas A&M Athletics

COLLEGE STATION, Texas — In deviation from the collegiate opponents they usually face, the Texas A&M volleyball team took on the Chinese team, Shandong, in their first local match of the season at A&M Consolidated High School Tiger Gym.

“Those guys carry us every day,” Texas A&M head coach Laurie Corbelli said, “You need to have a lot of discipline, is how I put it. Typically the older players have a lot more of that just because of all the years, but it is time for the young kids to experience something like this.”

Among those to start off their careers for the Aggies was freshman middle blocker Maddie Douglas and freshman Hollann Hans. Senior setter Kaysie Shebeneck stepped in for Aiple for the first time of the season.

Shandong jumped out to a 13-8 lead in the first set, with Hans making an impression to help the Aggies get their first lead of the match recording a kill and three service aces in a 6-0 run that put the Aggies ahead 14-13. A service error would tie the game at 14 apiece, until junior opposite Ashlie Reasor drilled down a kill to make it a 15-14 Aggie lead. The score would tie three more times, the final one coming at 21-21 before Shandong went on a three point run to go up 24-21. The Aggies fought off two set points to make it 24-23 off a, junior outside hitter, Kiara McGee kill and a Reasor and sophomore middle blocker Kaitlyn Blake block. Shandong returned the favor with a kill to end the first set.

The Aggies introduced many newcomers to the game in the second set, Shandong took advantage of the makeshift lineup and jumped to a 13-4 lead. The Chinese team continued to build upon their lead at 22-10. A&M was able to rally up five more points before the Chinese took the set 25-15.

The third started off strong for the Aggies, holding a 4-3 lead before Shandong jumped ahead to a 7-4 lead. A&M tied up the match at 7-7 but Shandong pulled away to build a 22-15 advantage over the Aggies. The Chinese were able to hold off the hard-fighting Aggies to end the match with a third set win 25-17.

The match could not be played at their home court, Reed Arena, because a career fair was taking place there on the only night that was available for each team. The Aggies will make their first home appearance on Friday, Sept. 16 when they host second-ranked Wisconsin.

A&M is currently ranked 16th in the AVCA Top-25 Coaches Poll and are favored to win the Southeastern Conference (SEC) title this season. The Aggies return on the road this weekend, traveling to Las Cruces, New Mexico to take on Arizona and New Mexico State on Friday and UTEP in El Paso, Texas on Saturday.

Shandong has already swept UTSA and Southwestern on their U.S. tour, which continues this week, taking on UNLV in Las Vegas on Wednesday.