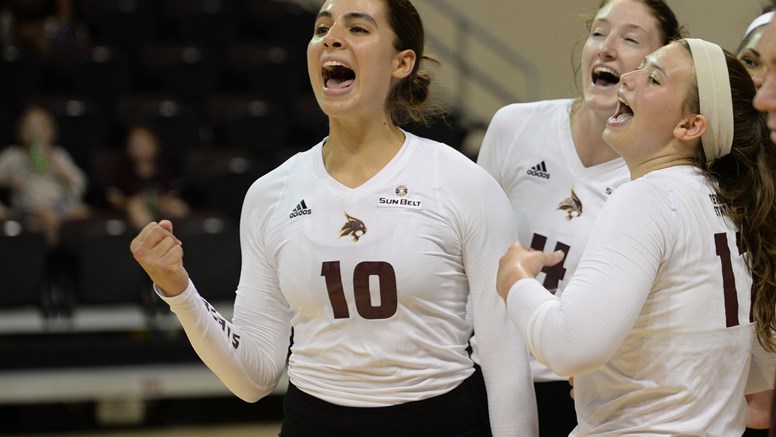 The Texas State Bobcats became the sixth team in the nation to reach the 20-win plateau this season, extending their current win streak to 15 matches with a sweep of Troy. Current Photo via Texas State Athletics

The Bobcats (20-5, 11-0 Sun Belt) became the sixth team in the nation to reach the 20-win plateau this season. The maroon and gold are also on a 15-match win streak, which is the third-longest in school history. Troy fell to 10-13 overall and 4-6 in the league.

Perfect road trip✅
20 wins for the third-straight year✅
11-0 #SunBeltVB record✅
Get to 15 on our Cat Counter✅
3rd-longest win streak in school history✅#BobcatsWin 😼😤 pic.twitter.com/p4EgOxvTJJ

True freshman Janell Fitzgerald led all players with 12 kills. She had pinpoint accuracy with just one error on 23 swings for a .478 hitting percentage. Senior Madison Daigle hit .500 and finished with eight kills and five blocks of her own. True freshman Emily DeWalt distributed 30 assists and tallied her 16th double-double with 11 digs. Junior Micah Dinwiddie also corralled 11 digs.

No member of the home side finished with double-digit kills. Logan Page had the most with nine. Amara Anderson tallied 25 assists and 11 digs.

The Bobcats won the opening set 25-17 but not before a plethora of theatrics. Troy came out on fire and sailed into a 12-5 lead. From that moment, however, Texas State eliminated the jitters and violently shifted the pendulum thanks to a massive 16-2 run. That would be all the maroon and gold would need to take the initial lead.

The second stanza saw a whopping 15 ties and six lead changes. In the end, it was the visiting Bobcats who had just enough juice to capture the frame 25-22. Neither team was ever able to find an advantage of more than two points until the final tally was recorded. The last draw came at 20-20. TXST scored the next three points and forced the Trojans to burn through both timeouts. They were able to post two replies, but Texas State proved to be too strong.

The final period was all Bobcats. They led 8-4 initially and finished off the night 25-19. Troy pulled within one at 12-11, but Texas State scored four of the next five points to end the rally. The Trojans once again closed the gap at 18-16, but that would prove to be their last hurrah.

TXST improved to 10-0 all-time over Troy.

The final two matches of the regular season inside Strahan Arena are next on the docket for the maroon and gold. Texas State will first play host to Louisiana at 6:30 p.m. Oct. 26. Senior Day will be against ULM and is slated for a noon start Oct. 28.