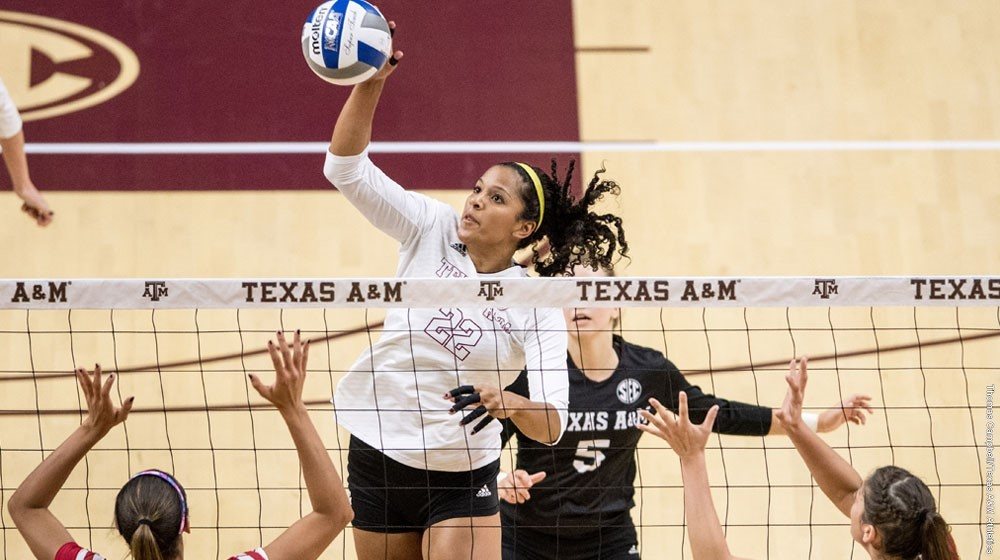 The Texas A&M Aggies looked calm and in control, despite being down late in the first set, as they notched a straight-set victory over the Arkansas Razorbacks. It was their third SEC win of the season.

As a team, the Aggies had a hitting percentage of .380, with 44 kills and 6 blocks. Perhaps the key statistic of the match was hitting errors: Texas A&M had only 9 to Arkansas’s 22.

Texas A&M relied on its veteran, Jazzmin Babers, who delivered with 10 kills (.526 hitting percentage) and 4 blocks. Babers, the SEC’s reigning Defensive Player of the Week, reached a big milestone during the match in recording her 1,000th career kill. The Aggies balanced their attack with Hollann Hans (10 kills, .500) and Kaitlyn Blake (9 kills, .500). Stephanie Aiple was also a big contributor for Texas A&M with 35 assists and 3 blocks.

Danielle Harbin was Arkansas’s offensive star. She tallied the most kills of anyone on the court with 13, and also reached a milestone of her own by recording her 500th career kill. Ana Sofia Jusino, who had the most blocks for the Razorbacks with 4, was another bright spot for Arkansas.

Texas A&M will have another away match on Sunday, October 9th, at 3:30 p.m. against Ole Miss, while Arkansas hits the road to face SEC-foe Missouri on Sunday at 1:30 p.m. (CT).

FAYETTEVILLE, Ark. – Senior co-captain Danielle Harbin put down a match-high 13 kills on Wednesday night in a loss to Texas A&M at Barnhill Arena. With her third kill of the night, the Mobile, Alabama, native became the 32nd player in program history to reach 500 career kills. The Razorbacks hit the road for their next match, a Sunday contest at Missouri at 1:30 p.m. (CT).

Defensively, sophomore libero Okiana Valle had a team-high 12 digs and senior Ana Sofia Jusino tied for the match lead with four total blocks. Jusino now has seven matches this season with at least four blocks and moves within six of moving in to the program’s top-15 career blocks leaders.

In the opening set, Arkansas (3-13, 1-3 SEC) and Texas A&M (9-6, 3-1 SEC) traded points to begin the match with neither team leading by more than two until the Razorbacks used a five-point run to take an 18-15 lead on a tandem block by Harbin and Jusino. Arkansas led 21-20 after a kill from Harbin but the visitors won five of the last six points in the set to take a 1-0 match lead.

Texas A&M used a pair of mid-set runs—10-1 in the second and 9-1 in the third—to create space on the scoreboard and secure the victory. In the setback, Barbara Dapic was next on the team with six kills and Jusino and Breana Jones combined for 10 kills in the middle. Each finished the match with five kills.

After three-consecutive road matches, the Razorbacks return to Barnhill Arena on Friday, Oct. 21, to host Alabama to begin a four-match home stand. For information about tickets, fans can call 800-982-HOGS (4647) or buy tickets online.

A press release from Texas A&M Athletics was not available at the time this article was posted.