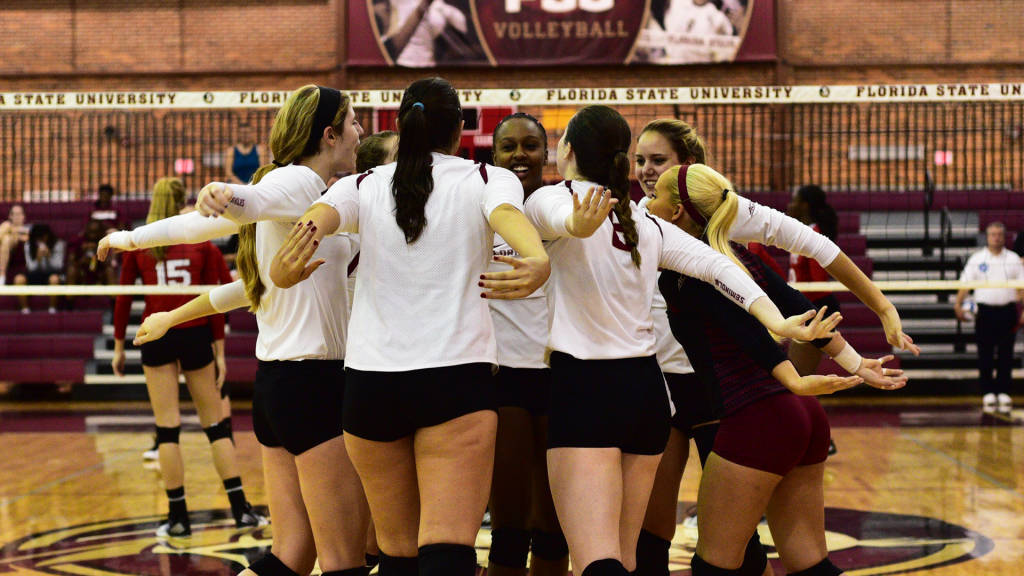 Florida State won 3-2 over Georgia Tech, relying on the strength of their seniors to come away with the victory in the pressure-packed match. Current Photo via Florida State Athletics

The Florida State Seminoles positioned themselves for an easy win over the Georgia Tech Yellow Jackets before the match momentum shifted in the third set. Despite being up 2 sets to 0, it took five sets for the Seminoles to secure the victory in the in-conference showdown.

For the Seminoles, senior Katie Horton led her team with 14 kills, 9 digs and two blocks—just missing a double-double. Another senior, Hailey Duke, did record a double-double, notching 29 assists and 13 digs.

Notably, Florida State senior Mara Green had 12 kills and 6 blocks, 3 of which were solo.

For the visiting Yellow Jackets, they relied on the Van Gunst twins. Both Annika and Teegan Van Gunst notched double-doubles. Teegan Van Gunst had 15 kills, 16 digs and 3 solo blocks of her own. Annika Van Gunst, meanwhile, tallied 12 kills and 16 digs.

Even with the Van Gunsts’ impressive performances, it was actually Georgia Tech’s Gabriela Stavnetchei who led the match in kills. She laid down 17, and also contributed on defense with two solo blocks.

TALLAHASSEE, Fla. – Competing in the final home match of their Florida State careers, seniors Mara Green, Katie Horton, Melanie Keil and Hailey Luke made significant contributions to help the 16th-ranked Seminoles complete a five-set victory over Georgia Tech at Tully Gym by scores of 25-17, 25-22, 16-25, 23-25, 15-13 in Atlantic Coast Conference volleyball action.
Horton emerged with a team-high 14 kills, while adding nine digs and two blocks. Luke added a team-high 29 assists and 13 digs to complete her fifth double-double of the season and 14th of her career.
The versatile Green ended the afternoon with 12 kills and six blocks, including three solo, helping Florida State finish with 59 kills. Keil was also active on both offense (seven kills) and defense (eight blocks, three digs) as the Seminoles finished with a 26-24 edge in total blocks.
Joining both Green and Keil among the defensive leaders was Cecilie Woie, who finished with 27 digs and eight assists. Woie ends the regular season with at least 20 digs in six of her final nine matches. Freshman Stasa Miljevic came off the bench to close with five kills (.444 attack percentage) and five assisted blocks, while Milica Kubura added nine kills and three blocks (two solo).
Florida State now awaits its fate in the 2016 NCAA Volleyball Tournament that begins next week. Pairings for the tournament are released on Sunday, Nov. 27, at 9 p.m. on ESPNU. All Seminole fans are encouraged to watch the selection show with the team on the second floor of Doak Campbell Stadium in the football projection room. Attendance is free and opened to the public.
The defensive presence of Green and Miljevic coupled with two kills from Horton and Brianne Burkert helped Florida State establish an early 7-2 lead in the fifth set. However, the Yellow Jackets answered by scoring seven of the next nine points, capitalizing on two unforced Seminole errors and blocks by Teegan Van Gunst and Rebecca Martin to make for a 9-8 contest.
Natasha Calkins put the Seminoles into double figures, but Georgia Tech scored five of the next nine points to pull even at 13-all. A Teegan Van Gunst service error opened the door for Florida State’s Madison Sullivan, who forced back-to-back attack errors by Gabriela Stavnetchei, as the Seminoles closed out the season with an 11-3 mark in Tully Gym.
With momentum swinging the way of Georgia Tech, following its decisive win in the third, the Yellow Jackets grabbed an 11-7 lead to force Florida State into its first timeout of the fourth set. The Seminoles were unable to derail the Rambling Wreck, who used two kills by Teegan Van Gunst and Kodie Comby to extend the lead to 23-13.
Green her second kill of the set past the Georgia Tech defense for the 14th Seminole point, which put Woie in serve. Woie’s service game, along with two kills from Burkert and two blocks by Keil, helped trim the lead to 23-21. Florida State eventually pulled to within one, 24-23, on a slam by Kubura, but it was a strike by Teegan Van Gunst that brought the match to a 2-2 deadlock.
Three kills by Teegan Van Gunst and two each from Gabriela Stavnetchei and Annika Van Gunst allowed the Yellow Jackets to establish a 14-3 lead in the third. Despite kills from Kubura, Horton and Green, the Florida State offense was unable to get into rhythm as the Yellow Jackets eventually sustained a 23-12 lead.
The Seminoles made a brief run, behind back-to-back kills by Green, but Georgia Tech came through with a slam from Stavnetchei to end the rally and complete the nine-point win.
Stavnetchei recorded four kills in a five-point stretch to give Georgia Tech an 8-5 advantage early in the second set. Stavnetchei and the Yellow Jackets eventually doubled that lead to six, 21-15, after she drove home a kill on a pass from Martin.
However, a Georgia Tech attack error put Luke in serve for the Seminoles. The three-time captain, along with the combination of Green and Milejevic at the net, helped Florida State put together a 7-1 run to bring the set to a 22-all tie. Luke connected with Green and Horton for kills as the Seminoles assumed the two-point lead before the tandem of Green and Miljevic provided the game clinching point on a block.
Two points from Burkert and a series of kills from Keil helped Florida State establish an 8-4 lead in the opening set. Georgia Tech rallied, trimming the deficit to two, but five Seminole kills, including two from Horton, made for a 16-12 Florida State advantage.
Strikes by Annika Van Gunst kept Georgia Tech’s offense in rhythm as Florida State called a timeout leading 19-15. Strategic changes on defense combined with three Miljevic kills down the stretch were instrumental in an eight-point win for the Seminoles.

TALLAHASSEE, Fla. – In their regular season finale, the Georgia Tech volleyball team (24-8, 15-5 ACC) narrowly fell in five sets at No. 16 Florida State (24-5, 17-3) on Friday afternoon at Tully Gym. The Jackets await their post-season fate with the NCAA Selection Show set for Sunday at 9 p.m. ET on ESPNU.

How It Happened
The Jackets got off to a slow start in game one and never caught up to Florida State. At 22-17, the Seminoles scored the final three points of the set to take it 25-17.

The Jackets had a late lead 23-13 in game four, but the Seminoles never quit and worked b ack within three 23-20. Georgia Tech held on to win 25-23 and force a fifth game.

In game five, it was the Jackets turn to recover from a 7-2 deficit to tie the game 12-12. Georgia Tech took the lead 13-12 on a solo block from Gabriela Stavnetchei, but Florida State scored the final three points of the game to escape 15-13.

Quote
“I thought we played pretty well,” head coach Michelle Collier said. “The first two games they [the Seminoles] were able to do a good job against us defensively and once we matched what they were doing defensively we were able to produce more offensively.

“This team has been unbelievably resilient all this season. They are going after it and not giving up. I think that they definitely created a way to play volleyball out there to represent Georgia Tech that should make a lot of people proud.

Quick Hits
– Annika Van Gunst tallied her fifth double-double of the season with 12 kills and 16 digs on .385 hitting.
– Teegan Van Gunst recorded 15 kills, marking her 25th-straight match with double-figure kills. She added 16 digs for her 20th double-double this season. She put down a career-best three solo blocks.
– Gabriela Stavnetchei led all players on the court and tied her career-best with 17 kills and put down two solo blocks.
– Rebecca Martin and Kodie Comby added five kills, while Martin had 43 assists, two aces and was one dig away from a double-double.
– London Ackermann put up 22 digs, marking her 13th match this season with 20-plus digs.