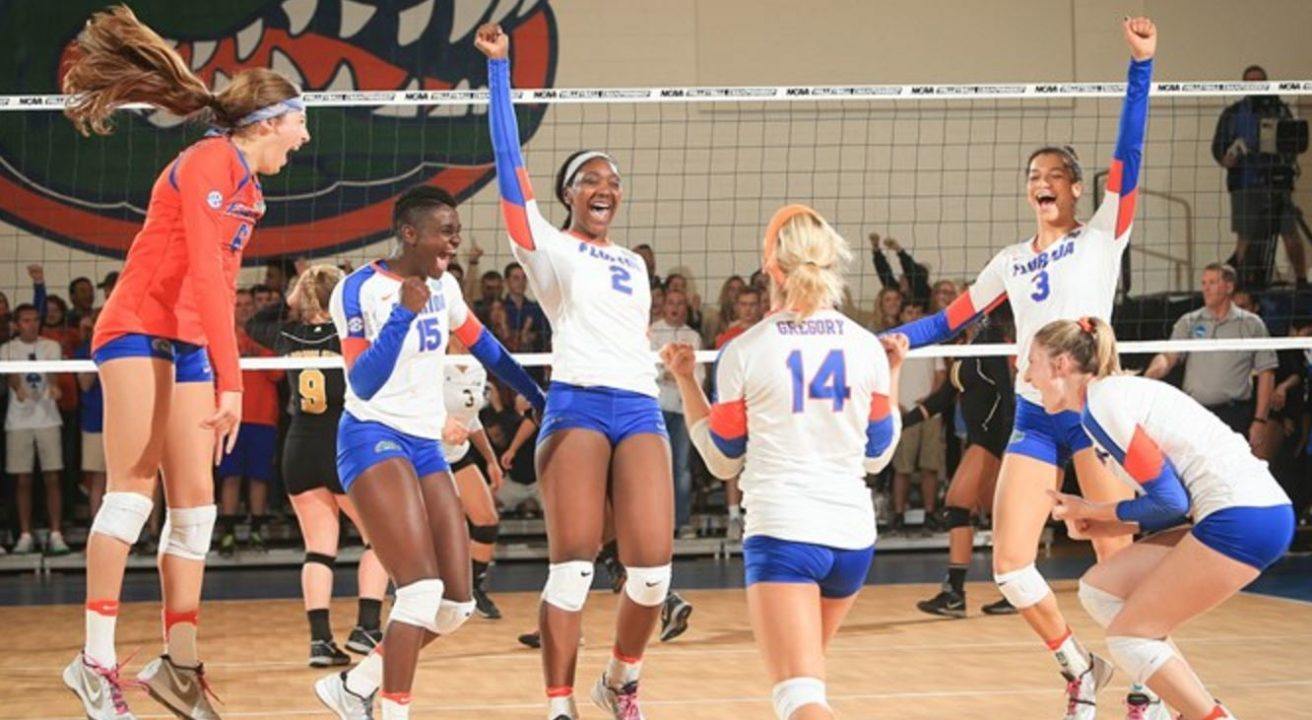 The Florida Gators cruised into the Second Round of the NCAA tournament after defeating Alabama State in three quick sets. Current Photo via Florida Athletics

Carli Snyder shined for the Gators, notching a double-double in just three short sets, and pounding down an additional 4 aces. It was her 10th double-double of the season, which leads the team.

Later tonight, at 7:30PM ET, the Gators will have to take on the Florida State Seminoles in the Second Round. The Gators defeated the Seminoles earlier this season, back in September, 3 sets to 1.

Saturday (Dec. 3) night’s showdown, scheduled for 7:30 p.m., will be the fourth time in since 2010 the Gators and Seminoles meet each other in the NCAA Tournament Second Round. Florida is 2-1 in the three matches already played during that span, coming away with a four-set win in 2015 and a five-set victory in 2010.

Florida was led by three-time All-American right side Alex Holston and All-SEC outside hitter Carli Snyder in its convincing win over the Hornets (24-9, 18-0 SWAC).

Snyder logged match highs in kills (14), points (18), and digs (11), recording her team-best 10th double-double of the season. Holston logged 13 kills on 20 total attacks. Both were only charged with two errors and hit better than .540 for the match, effectively spearheading UF’s .464 clip, the fourth-highest hitting percentage its ever recorded in NCAA Tournament play.

Defensively, UF’s size and length provided the difference, limiting Alabama State to a mere 14 kills and an .016 hitting percentage.

GAINESVILLE, Fla. – In a similar script to two seasons ago, the Alabama State women’s volleyball team met a highly nationally-ranked Florida Gators volleyball team on their home court and lost in three sets (25-15, 25-13, 25-9) in the first round of the NCAA Division I volleyball tournament on Friday at the Lemerand Athletic Center.

For Alabama State (24-9), it was a bittersweet ending to such a historic season for the program in which it ran the table with an undefeated conference season (18-0 in regular season, won all three matches in the Southwestern Athletic Conference Tournament).

“I do know one thing—that this loss will fuel our training in the spring for next season,” said Alabama State head women’s volleyball coach Penny Lucas-White.

“I hate that it ended this way—without leaving it all on the court— but when you look at our whole season, it was a wonderful journey.  We enjoyed each other.
The girls grew.  We have to a lot to give with six freshmen.  There is a lot of promise.  Jamie [Coleman] did a phenomenal job in nurturing this group this season.  She challenged them and they responded extremely well.  It was supposed to be a rebuilding year and we swept [our conference] so it’s a great year.  But, at the end of the day, we are competitors and we have some more work to do.”

The Lady Hornets had some bright moments as it took short leads in the early goings of the first and third sets, but was unable to muster much of a rally past the midway part of the sets.

ASU took a 4-3 lead in the first set, but then allowed six straight points by way of three kills by the Gators, a pair of attacking errors and a service ace to fall behind 9-4.

The Lady Hornets played even to a 4-4 tie in the second set before dropping eight of the next 10 points with a series of miscues.

In the third set, Alabama State took a 3-1 advantage after a Briana Dorsey kill and some solid serving from Kori Kutsch.

But a taller Florida team (seven players who were 6-foot-2 or taller including 6-foot-8 Rachael Kramer) roared back with kills from their towering front line as Carli Snyder and Alex Holston each came up with big plays during the stretch to take a commanding 15-6 lead before going on to take the set.

Florida (27-3) will advance to play Florida State on Saturday, who defeated Cincinnati earlier in the day in four sets.

“Well, that wasn’t the outcome that I expected,” Lucas-White said.

“I felt like Florida came out well prepared and ready on all cylinders.  I believe the youth of my team showed.  I don’t think they responded well at all.  This is something that we’ve had to prepare for.  We talked to them in practice about hitting high off hands, roll shooting and hitting shots.  It’s obvious that they didn’t respond so I was very disappointed.  This wasn’t the first time that we saw a team that had a big block.  We played Arizona, Pepperdine and SMU so I was disappointed because of their apprehension of adjusting.”

Kutsch had seven assists and three digs and senior Jamie Coleman had a team-high five digs.

“As a team, we didn’t play as well as we could have,” said Coleman, the senior who played her final match as a player at Alabama State.