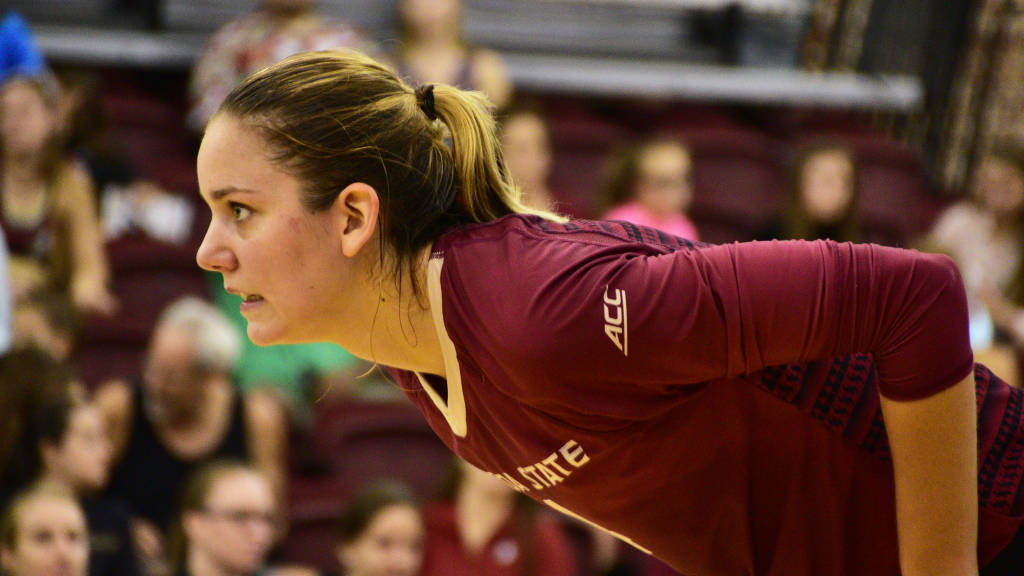 Florida State hit for .252, while holding the Cardinals to .159 despite Horton’s match-high 18 kills.

TALLAHASSEE, Fla. – Katie Horton notched her second double-double of the weekend (17 digs, 10 kills) while Milica Kubura and Christina Ambrose added 15 and 10 kills, respectively, to lead 15th-ranked Florida State to a 26-24, 25-18, 23-25, 25-22 win over Louisville in Tully Gym on Sunday afternoon. The Seminoles completed their first weekend of Atlantic Coast Conference (ACC) action by posting victories of Miami and Louisville as they moved to 9-2 overall and 2-0 in league play.
Horton anchored Florida State’s defensive efforts with 17 digs and also contributed four blocks (two solo), as the Seminoles held Louisville’s offense to a .159 attack percentage. The versatile senior was joined on the front row by Melanie Keil (five blocks) and Mara Green (three blocks) as FSU tallied 15 total blocks. Joining Horton among statistical leaders in the back row were Brianne Burkert (13 digs) and Cecilie Woie (10).
Kubura was the offensive catalyst for the Seminoles as she enjoyed her sixth double-digit kill performance of the season. In 34 attacks on the Cardinals’ (5-7, 0-2 ACC) defense, Kubura committed three errors to post a .353 attack percentage, marking the seventh time this season and fourth straight match that the hard-hitting junior eclipsed the .300 attack percentage mark.
Ambrose, also highly effective on offense for the Seminoles with a .348 attack percentage, penetrated the Louisville defense on 23 occasions and limited herself to a pair of miscues as she topped double-digit kills for the fourth time in 2016. Burkert, who finished off her eighth double-double, was the leader for the Seminoles in assists (24), while Hailey Luke added 19 to go along with seven digs.
“We had two different teams on the court today,” said head coach Chris Poole. “Starting the match we were playing inconsistently on offense, but better defensively. Our offense got better as the match progressed, but our defense struggled. We are glad to get the win and we need to get everyone back on the court in practice to improve.”
Four kills by Horton along with contributions from Keil and Kubura provided Florida State with a 12-9 advantage in the fourth set. Louisville countered with a series of strikes by Janelle Jenkins and Jasmine Bennett to close within one, 14-13.
The Seminoles quickly answered with a four-point run, regaining their offensive rhythm behind kills from Ambrose and Natasha Calkins along with a service ace by Bozena Culo, as they assumed an 18-14 lead. Molly Sauer again sparked the Louisville offense, which pieced together an 8-4 run, as the game reached a 22-all deadlock. But, it was the combination of kills from Ambrose and Kubura, along with an attack error by Louisville that provided FSU with its fifth win at home this season.
Florida State’s offense again established an early advantage, this time moving out to a 7-3 lead on a service ace by Culo in the third set. Louisville quickly rebounded with a kill by Bennett and key points by Melanie McHenry as it moved to within one, 12-11.
McHenry continued to apply pressure on the Florida State defense, pulling the Cardinals even with a kill that knotted the game at 17. Sauer took over in serve and forced Florida State into committing three attack errors as Louisville eventually moved in front 22-18. The Seminoles would retaliate behind kills from Keil and Horton, closing the margin to 24-22, before a kill by Tess Clark provided the Cardinals with the win.
The Seminoles carried over momentum from their opening set win in the early stages of the second frame as they established a 9-2 lead behind two kills by Horton and four unforced Louisville errors. Gabbie Wiley orchestrated a rally by Louisville as the Cardinals pieced together a 5-1 run to trim the FSU lead to 12-9.
Leading by four in the latter stages of the second set, Florida State capitalized on a series of kills by Horton, Kubura and Keil as it stretched its advantage to 20-15. The Seminoles surrendered just two Louisville points for the remainder of the frame and converted kills by Green and Calkins to complete the seven-point victory.
A service error by Wiley, coupled with a kill by Horton allowed Florida State to extend a one-point lead to four, 13-9, at the midpoint of the opening set. Strikes by Ambrose and Kubura allowed the Seminoles to maintain their four-point lead, 18-14, before 6-2 run by Louisville narrowed the gap to one, forcing an FSU timeout.
Two kills by Kubura and a pair of unforced errors by Louisville brought the tightly contested battle to a 24-all deadlock. It was there that Kubura slammed home her fourth kill of the frame to give Florida State the one-point advantage. With Luke in serve the Seminoles closed out the victory with an attack error by McHenry.
Florida State remains at home this weekend where it will host Syracuse (Sept. 30) and Boston College (Oct. 2) as it looks to remain unbeaten in ACC play.

Courtesy of Louisville Athletics
Melanie McHenry had a match-high 18 kills and three aces but it was not enough as the University of Louisville fell 26-24, 25-18, 23-25, 25-22 to No. 15-ranked Florida State in ACC volleyball action Sunday in Tallahassee.

“Molly Sauer was rock solid for us for the whole match and added four aces too,” said Anne Kordes, UofL head coach. “Proud to see the fight in the team but we need to pair that with a focus on the execution and then we would have had a chance for a different outcome. We are well within our ability to control the ball and make better decisions in tight matches. I saw us get better today and I like where we are heading.”

The Cards fell 26-24 in the first set. UofL out hit the Noles 16-9 in kills but were blocked six times and had five service errors which tipped the set to FSU. The Cards fought off three set points and were led by freshman Melanie McHenry‘s six kills.

In the second set, UofL used a 9-3 run to comeback to within two points at 14-12.  Hampered by .023 hitting, the Cardinals still managed stay within striking distance before falling 25-18.

The Cards used .346 hitting and aggressive serving with three aces to overcome an early four point deficit.  Louisville took its first lead at 17-16 and then battled to the 25-23 win behind the hitting of Melanie McHenry and Tess Clark, who combined for seven kills and two blocks.

In the fourth set, Louisville fell behind 12-8 early but then used a 6-1 run to come within one at 19-18.  The Cards tied at 22 on a kill by Tess Clark but could not stop a hard-charging FSU team who scored the final three straight points for the 25-23 win.

The Cardinals return to KFC Yum! Center on Friday for a match with Wake Forest on Friday night at 7 p.m. and then Duke on Sunday, Oct. 2 at 1 p.m.