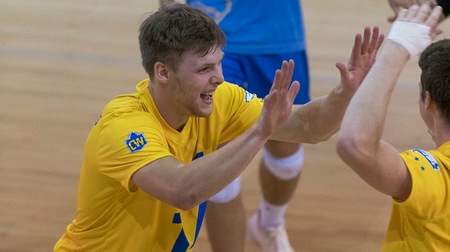 Not much has changed in the USports Men's volleyball rankings from the first week of play to the second. Current Photo via USports.ca

Not much has changed in the USports Men’s volleyball rankings from the first week of play to the second. Trinity Western sits atop the rankings after a 4-0 start to the season while Ryerson comes in at #2. The only change comes with UBC making an appearance in the top-10 at #10 with a 4-0 start to the year, taking over Laval’s spot.

In a top-10 match-up for the week, Trinity Western took down Brandon in a four-set battle. Eric Loeppky led the way with 26 kills on a .469 hitting clip with three aces, six digs and two blocks.

UBC had three players with double-digit kills in a four-set win over Calgary, that helped propel them into the top-10 this week. Irvan Brar led the way with 15 kills on a .407 hitting performance while Mat Guidi and Coltyn Liu each added another 10 kills.