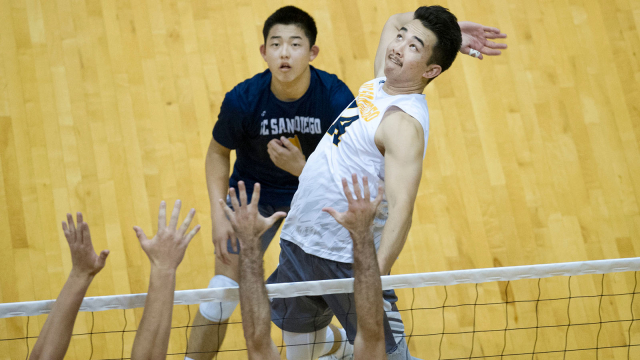 This week has featured some top-20 matches, with #4 UCLA downing #2 UC Irvine in a five-set thriller while #19 UCSD has started their season unbeaten with a sweep over NAIA's UC Merced. Current Photo via Andy Wilhelm, UCSD Athletics

UCSD has remained unbeaten thus far in the season at 3-0, which has been their best start since 1996 when they started off 6-0. Their third match of the season was against UC Merced in their season opener, downing the NAIA squad in straight sets.

Leading UCSD’s side was Luke McDonald and Luke La Mont each with 9 kills apiece. La Mont’s 9 kills came with a .750 hitting percentage while McDonald hit for .667 in the match. In the backcourt, Ryan Lew picked up 8 digs while Vlad Pesic put down 8 blocks.

It took grit and desire for the UCLA Bruins to make a comeback over UC Irvine in their fourth match of the season, fighting a 0-2 deficit to win in five.

Daenan Gyimah and Christian Hessenauer led the Bruins with 13 kills each while Dylan Missry added 9 kills, 5 aces and 10 digs for a near double-double. Setter Micah Ma’a dished out 48 assists along with 10 digs to produce a double-double.

On UC Irvine’s side, Karl Apfelback put down a match-best 14 kills while Dante Chakravorti picked up 14 digs. Also picking up double-digit digs for the Anteaters were JB Kam and David Parker with 12 and 10 digs, respectively.