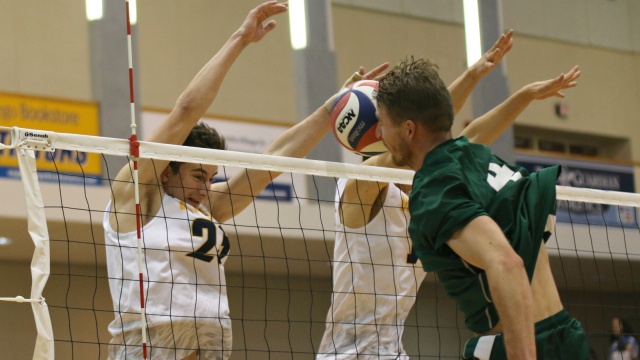 LA JOLLA, Calif. – The University of California San Diego rallied from having lost the opening set to get past Concordia University Irvine, 3-1, in non-conference men’s volleyball action Friday night at RIMAC Arena. Set scores were 18-25, 29-27, 25-23 and 25-22.

With a second straight victory at home over an NCAA Division II foe, UC San Diego improved to 7-15 overall. Concordia, an independent and winner of seven in a row heading in, fell to 16-8. The Eagles were coming off of a four-set triumph at No. 15 UC Santa Barbara on Wednesday night. The Tritons had fought back from a pair of one-set deficits to post a five-set triumph over the Eagles in this year’s first meeting in Irvine back on Jan. 21, and thus swept the season series. CUI will join the Mountain Pacific Sports Federation (MPSF) next year, as UCSD departs the MPSF for the newly-formed Big West Conference, both as associate members.

Junior opposite and tri-captain Tanner Syftestad dropped 24 kills on Concordia, leading his team in that category remarkably for an 18th consecutive match. He in fact was one of three Tritons in double-figure kills, joined by senior middle blocker Shayne Beamer (season-high 13) and senior outside hitter and fellow tri-captain Ian Colbert (12). Junior setter Milosh Stojcic collected 52 assists.

Colbert and Stojcic completed their team-best fifth and third career double-doubles, respectively, with Colbert adding 12 digs to lead all players and Stojcic 10 digs. It was Colbert’s first double-double of 2017 and Stojcic’s second in three matches.

Syftestad also contributed seven digs, one ace and a season- and match-high-tying six total blocks. Colbert served a pair of aces to equal his best effort. Beamer hit .333 (13-5-24) and got his hands on five block assists.

Back-to-back service aces by Jonathon Predney capped a 4-0 run in the first set that gave Concordia an 18-14 lead and forced the Tritons’ second timeout. The Eagles later notched the final four points of the stanza.

That’s when UCSD’s fortunes turned. Early in game two, Stojcic and Zhu combined for a big block in between a kill and ace from Colbert and a 10-7 edge. Jimenez pounded a kill off his opponent’s chest for 11-8, and Syftestad found the back right corner from the near left side for 20-18. Setter Chandler Gibb’s pancake dig of Colbert’s save off the top of the tape, kept the Eagles alive on the Tritons’ first set point. UCSD then staved off three of them, with two courtesy of Syftestad kills, around one by Beamer as he coolly handled the overpass. At 27-27, another emphatic Beamer kill off the quick set by Stojcic gave the home side a second set point, and Manchenko picked the perfect time to serve a winner.

Manchenko promptly started set three with his other ace to get his squad going. The Tritons were up 12-8 and 18-14 at the two Concordia timeouts. Coming out of its second timeout, UCSD received a big kill from Zhu for a 23-20 lead. A Predney attack error and Manchenko kill got the Tritons the rest of the way.

The fourth set was effectively a UCSD block party. Stuff blocks from Beamer and Stojcic (8-8) and Beamer and Manchenko (10-9) preceded a huge solo denial by Syftestad on Ryan Anselmo for 11-9. A critical 4-0 stretch later featured, in order, a Syftestad kill, combo block by Manchenko and Zhu, solo block by Zhu, and another stuff block crosscourt by Manchenko and Zhu out of the CUI timeout. The run turned a 15-14 deficit into an 18-15 advantage. A final block, by Beamer and Syftestad on Anselmo, pushed the score to 23-20, with Syftestad putting the exclamation point. Three of the Tritons’ final four points around that last block, were from his kills.

UCSD is off in the coming week for winter quarter final exams. The Tritons return to action at No. 9 Pepperdine on Thursday, March 30, and at No. 8 Stanford on Saturday, April 1. The latter match will air on Pac-12 Bay Area at 6 p.m.

Triton Notes: UCSD now leads the all-time series, 3-2, following its third straight win over Concordia … Three Tritons reached double figures in kills for the second time in 2017, the previous occurrence in a 3-2 home loss to UC Irvine on Jan. 20 with Tanner Syftestad (23), Devin Pontigon (11) and Alec Flowers (10) … The last time two UCSD players had double-doubles in the same contest was March 5, 2016, against UC Irvine, with Ryan Blaich (49 assists, 10 digs) and Ian Colbert (10 kills, 10 digs) … The Tritons were without the services of starting libero Ryan Lew (injury) and fellow true freshman Devin Pontigon (illness) … UCSD has its most wins since finishing 7-22 in 2013, equaling its combined total from the 2015 and 2016 seasons.

Press Release not available as of time of posting.