Undefeated Wolverines Set for Home and Home with Notre Dame 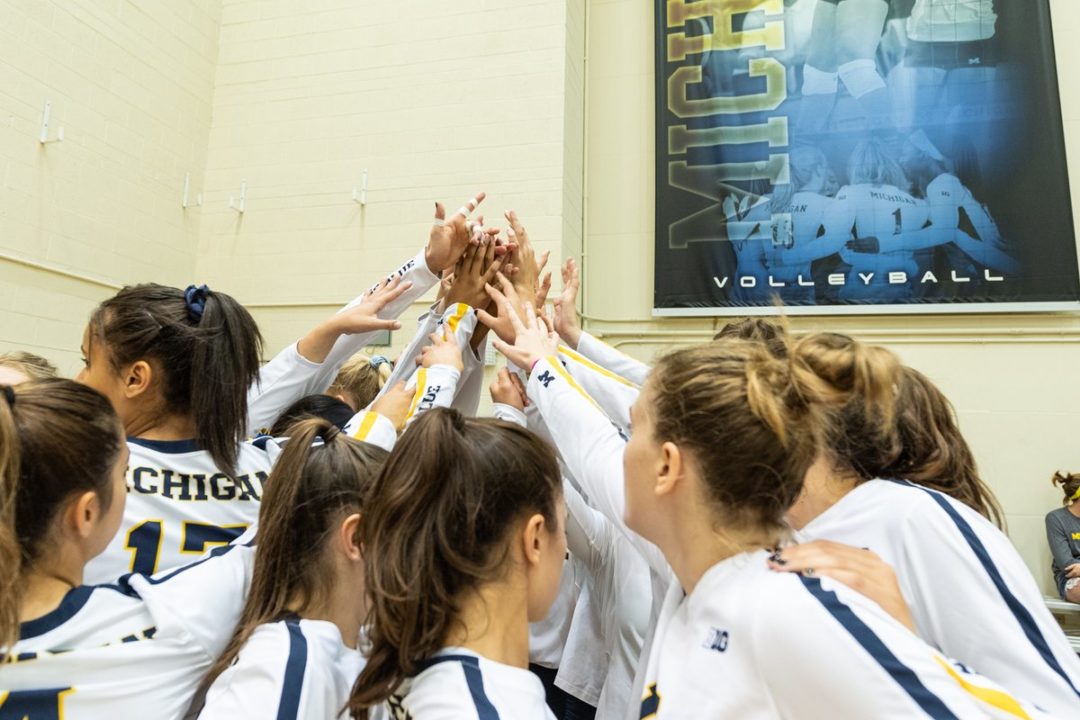 The University of Michigan volleyball team (9-0) will wrap up non-conference play this weekend with a home-and-home series against Notre Dame.  Current Photo via Michigan Athletics

ANN ARBOR, Mich. –– The No. 19-ranked University of Michigan volleyball team (9-0) will wrap up non-conference play this weekend with a home-and-home series against Notre Dame. The Wolverines will first play host to the Fighting Irish on Friday (Sept. 14) at 7 p.m. inside Crisler Center before making the trip to South Bend, Indiana, on Sunday (Sept. 16) for a 1 p.m. contest. Fans can watch Friday’s match live on the Big Ten Network, while Sunday’s match will be live streamed on ACC Network Extra.

How Sweep it is

The Wolverines enter the weekend with a perfect 9-0 record and a 7-0 record when playing in Ann Arbor this season. All nine of Michigan’s wins to start the 2018 campaign have come by a 3-0 sweep, which marks a new program record.

Head Coach Mark Rosen picked up his 600th career win on Friday (Sept. 7) in a 3-0 win over Oakland. Rosen has more than 600 career wins at Northern Michigan, Cal State Bakersfield, Boise State and Michigan, and is one of 21 active coaches in Division I with 600 career wins.

The Fighting Irish will enter the week with a 6-2 record after a 2-1 showing at the Holiday Inn-University Plaza Invitational at Western Kentucky last weekend. After suffering a first-round defeat last year, Notre Dame will be looking to make its second straight and 20th overall NCAA appearance this season. The Fighting Irish are led by junior outside hitter Jemma Yeadon, who boasts a 3.52 kills-per-set average, which ranks in the top-10 in the ACC.

Michigan and Notre Dame have met 12 times, with the most recent date occurring in 2009. Overall, the Fighting Irish boast a 7-5 record over the Wolverines in the all-time series, though Michigan has won four of the last six meetings. Despite both programs having storied NCAA histories, the two teams have never met during postseason play.

Michigan and the AVCA Poll

The Wolverines jumped one spot in the AVCA Top 25 Coaches Poll this week and are ranked No. 19 with 539 votes. Michigan began the year as the second team outside of the top-25 preseason poll with 153 votes and entered the poll at No. 23 following a 2-0 showing at the War Eagle Invitational to kick off the season.

Michigan is just one of nine teams nationally (and seven ranked in the AVCA Top-25) that remains unbeaten, including three from the Big Ten Conference. No. 8-ranked Illinois (8-0) and No. 15-ranked Purdue (8-0) also have a chance to jump into conference play next weekend with a perfect record.

Michigan’s senior class has posted a 47-10 record at home since the trio stepped foot on campus in the fall of 2015. The Wolverines are 7-0 when playing at home this season.

Michigan swept its second and final home tournament of the season with wins over Oakland, LSU and Colorado State last weekend, all via 3-0 sweep. Freshman outside hitter Paige Jones (MVP), redshirt junior Cori Crocker and junior setter MacKenzi Welsh were all named to the All-Tournament team.