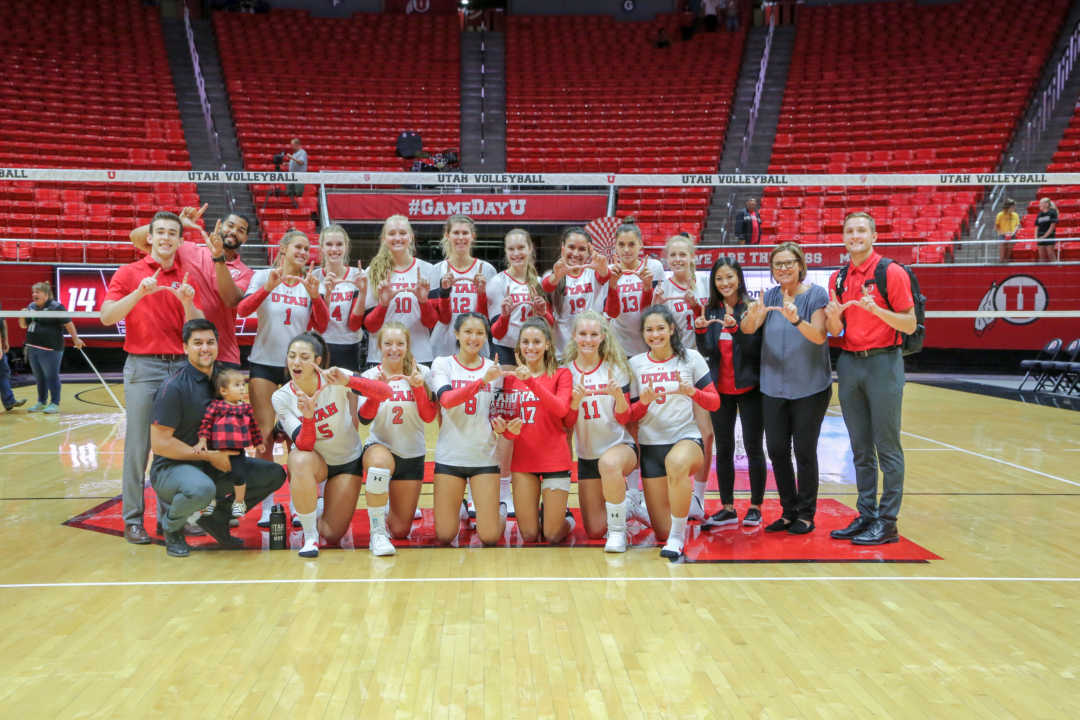 Utah went 5 sets twice on Saturday and emerged as champions of the Utah Classic.  Current Photo via University of Utah

Denver moved to 2-0 with a tie-break victory over UC Irvine, who missed out on their first victory of 2018. Despite getting the win, Denver only hit .128 for the match, opposed to UC Irvine’s .186 attack average. Irvine also held an advantage in kills (59 – 50), blocks (14-13), and digs (74-60). Despite scoring fewer points than Irvine, Denver was able to pull it out at the right times to remain undefeated.

Katarina Marinkovic and Lydia Bartalo both hit .081 for Denver. Bartalo led the way with 12 kills, Marinkovic and Becca Latham both finished with 10 kills. Tina Boe and Emma Willis both contributed 6 kills in a winning effort. Boe and Willis also led denver with 5 and 7 block assists respectively.  Olivia Novotny and Andrea Eddy chipped in 13 and 10 digs. Denver ran a 6-2 offense with Ellie Anderson recording 22 assists and Eddy finishing with 17.

Abby Marjama led the match with 13 kills for UC Irvine while posting a .357 hitting percentage. She was also the match’s leading scorer from teh service line with 4 aces. Loryn Carter and Harlee Kekauoha both chipped in 10 kills while hitting .080 and 0.83 respectively. Makayla Wolfe hit .429 on her way to 8 kills. She also led the match with 9 block assists. Haley DeSales led the match with 19 digs, tying her career-high mark.

Saint Mary’s had four players finish the double-digit kills. Lindsey Calvin (12), Sienna Young (12), Lindsey Knudsen (11), and Jennifer Laird (11) were all apart of the balanced attack for the Gaels. They employed a 6-2 offense with Alexsa Parker distributing 29 assists (and 17 digs), and Alosina Thompson had 21 assists for the match. Alex O’Sullivan led the match with 9 block assists to go with 8 kills.

Utah looked far more impressive in the box score with Dani Drews setting career-high marks with 24 kills and 20 digs. She also scored points from the service line with 2 aces. Laura Gauta was right behind with 20 kills and 2 block assists. Berkeley Oblad and Phoebe Grace both put away 11 kills form the middle for the Utes. Grace added 6 block assists and Oblad put up 4. Bailey Choy finished the match with 1 kills and 49 assists.

It was not the most technically sound match, but UC Irvine earned their first win of the season and leave Utah with a 1-2 record. They scored 7 more points than Saint Mary’s and had 7 more service aces (12 to 5). Both teams hit under .200 (UCI: .158, St. Mary’s: .137) and only two players finished with double-digit kills.

Loryn Carter led UC Irvine with 11 kills, and 3 block assists. Makayla Wolfe contributed 9 kills, 1 ace, 6 blocks assists, and hit .438. Idara Akpakpa and Harlee Kekauoha finished the match with 7 and 6 kills respectively.  The most impressive state line of the night came from Abby Marjama. While she only hit .000, she scored points on 7 kills and 9 service aces.

The Utah Utes bounced back from a 5-set defeat earlier in the day to defeat Denver in another 5-set match to claim the title at the Utah Classic. Dani Drews completed her second double-double of the day with a 24-kill and 20-dig performance for the Utes. She also hit .273 from the outside and scored 2 points from the service line. Laura Gauta, the tournament MVP, added 20 kills and 2 block assists to box score.

Bailey Choy distributed 49 assists on the night and added 2 kills of her own. 18 of those assists came out of the middle. Choy established a very strong connection with Phoebe Grace, who put away 13 kills on 23 attepts without committing an attack error. Brianna Doehrmann led the Utes in the back row with 20 digs and 2 service aces.

Katarina Marinkovic and Lydia Bartalo both had double-doubles for Denver. Marinkovic led her team with 18 kills and also chipped in 12 digs. Bartalo finished the match with 12 kills and 12 digs. Becca Latham posted a .394 hitting percentage on her way to notching 15 kills in the defeat. Tina Boe hit .421 with 10 kills, 1 ace, and 5 block assists.