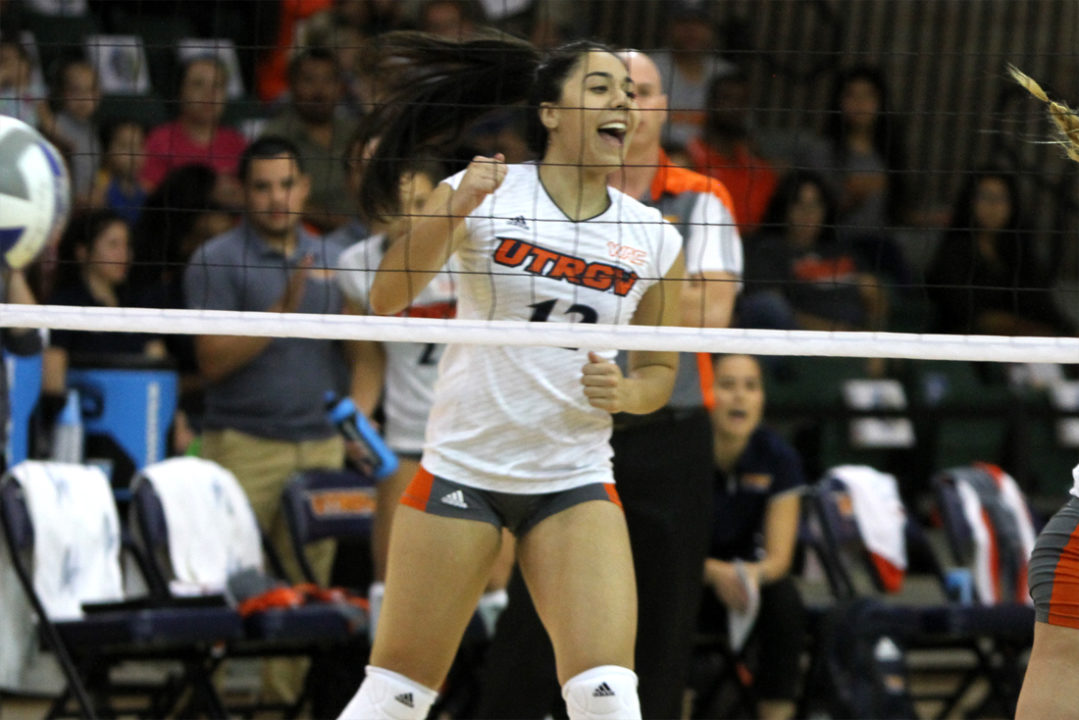 UTRGV made history, downing 15th-ranked Baylor in 4 sets to record its best win over a ranked foe. The Lady Bears recovered, notching a 3-1 win against Rice in the nightcap. Current Photo via UTRGV Athletics

UTRGV made history, downing 15th-ranked Baylor in 4 sets to record its best win over a ranked foe. The Lady Bears recovered, notching a 3-1 win against Rice in the nightcap.

For the second-straight meeting in the series, following a fouor-set win on Aug. 26, 2016, UTRGV got the better of Baylor. The 15th-ranked Lady Bears, who toppled 2nd-ranked Wisconsin last night, fell to the Vaqueros in 5 Saturday afternoon in Waco, Texas.

It was the highest-ranked win in regular season history for the Vaqueros, who handed Baylor its first home loss of the year.

You can call it the biggest regular season win in program history if you want… DOWN GOES No. 15 @BaylorVBall! #EleVate #WACvb https://t.co/xAoYRiWETk

The Vaqueros opened the first set with a 5-1 run to establish a lead over the Lady Bears and never surrendered it en route to a strong 25-14 win.

UTRGV jumped ahead again in the second set, 5-1, but Baylor came fighting back, using a 4-0 run to knot the score 6-6. Eleven tie scores followed before the Vaqueros could secure a 26-24 win with a kill by junior Barbara Silva and a Lady Bear error.

With their backs against the wall, the Lady Bears fought to register back-to-back wins in the third and fourth sets, 25-16 and 25-20, respectively.

In the decisive fifth set, the Vaqueros pulled ahead 11-5 and went on to lead by as many as 7 at 13-6. The Lady Bears strung together 4-straight scores, however, it would not be enough as UTRGV notched the final 2 points to register the 15-10 win and the 3-2 team result.

15th-ranked Baylor capped its up and down weekend with a 4-set victory over instate foe Rice Saturday night. Though the Owls lead the all-time series, 23-20, the Lady Bears have won 7-straight matchups dating back to 1999.

It was all Baylor in the first set, as the Lady Bears opened with a 7-1 stretch. They never trailed from there, holding off the Owls to register a 25-19 win.

In the second set, Baylor held a slight edge before Rice strung together 6-straight scores on a Shelby Livingstone serving run. The Lady Bears recovered with a 5-0 rally of their own to regain control and eventually secure a 25-21 win.

Rice used a 5-0 run to pull ahead of Baylor midway through the third set, 14-8, and registered 6-straight points to extend the match to four sets with a 25-16 win.

The fourth set was an absolute battle, as both teams played through 7 lead changes and 9 tie scores. The Lady Bears developed a cushion with a 9-3 stretch late and went on to tally the team result with a 25-21 victory.

Another one in the win column 💯#SicEm #NCAAVB #SHINE pic.twitter.com/2R6SivJn9h