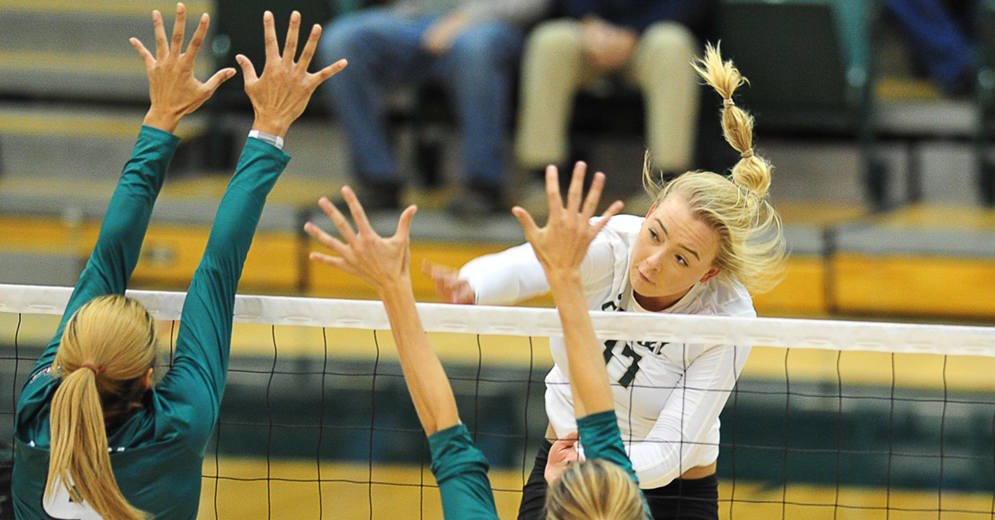 Irvine, California – #20 Cal Poly made it to double-digit wins in Big West play without a loss as they earned a tight sweep on the road against another team near the top of the conference standings in UC Irvine. It’s also the 15th straight victory for Cal Poly giving them their best start in program history.

The Van Winden sisters have been seemingly unstoppable for foes this season and that continued in Irvine, as Torrey Van Winden (18 kills, .289) and Adlee Van Winden (11 kills, .346) combined for 29 kills and 11 digs in the match. Plenty of help came in the form of Raeann Greisen (nine kills, .562) as setter Taylor Nelson (44 assists, nine digs) initiated the attacks.

In the losing effort, UC Irvine was able to establish Idara Akpakpa (13 kills, .619) and Harlee Kekauoha (nine kills, 10 digs) just missed out on a double-double. Overall though, the Cal Poly attack and some timely digs from Jessica McRoskey (13 digs) of the Mustangs was too much to overcome.

The win gives the Mustangs a two-match lead on the Anteaters, who stay in third as Hawaii was in second at just one loss but with more wins. It was done on the offensive end for Cal Poly in hitting .333, as neither team presented much of a blocking challenge with three per side. However, the back row countered that a bit with strong back row play defensively with 12 more digs (55-43). That stingy Cal Poly defense limited UC Irvine to a .217 mark.

UC Irvine scored the opening point, but from there Cal Poly established that attack and pulled ahead 9-4 – a lead they’d hold throughout. The Anteaters made things interesting with a 5-0 run after Cal Poly earned a set point chance at 24-17, but finally the Mustangs broke through for the 1-0 lead.

Set two was tighter throughout but this time the late run went Cal Poly’s way, as they scored nine of the final 14 to go up 2-0 in sets.

In the final set of play, a 6-1 start would be enough for Cal Poly to hold onto the lead. It was challenged at times as UC Irvine pulled within a point or two several times, including at 23-22. However, it was never enough to take a set.

Moving forward, Cal Poly has one more huge match at the top of the Big West standings with Hawaii coming to town on Friday. UC Irvine will head to Cal State Northridge on Friday before facing Long Beach State to wrap up their week.

Torrey, a sophomore, led Cal Poly with 18 kills while Adlee, a junior, finished with 11 kills to go along with nine digs. Senior Raeann Greisen also notched double-digit kills for the match, finishing with 10. Senior setter Taylor Nelson lead the passing game for the Mustangs with 44 assists and also getting nine digs. Sophomore Jessica McRoskeyled Cal Poly in digs with 13.

All three sets ended up close. The Mustangs got out to an 8-3 lead to start the match before UC Irvine closed the gap and got back in the set. Up 16-14, Cal Poly went on a 6-0 run to go up 22-14. The Anteaters would cut the lead to 24-22 before a Greisen kill won the set for the Mustangs.

The second set saw both teams trade points for the majority of the set. However, up 16-15 Cal Poly would score five straight points to go up 21-15 and would go on to win the set 25-20.

“I thought we just executed better for longer tonight,” Cal Poly head coach Sam Crosson said. “Irvine is a good team. I thought we made some very good defensive moves at times and were able to transition well. Our passers were very dialed in for the entire match.”

“It was another good consistent team effort. We kept their defense guessing and we were very engaged from the start and stayed consistent.”

Cal Poly now takes its 15-match winning streak (the third longest in the country) back home to Mott Athletics Center for a match against second place Hawai’i on Friday. The Rainbow Wahine are riding a four-match winning streak and are 9-1 in the Big West. The Mustangs handed them their only conference loss of the season earlier this month in Honolulu. First serve for the match is set for 7 p.m.

“It’s a great opportunity this team has put themselves in,” Crosson said. “Hawai’i is certainly going to be excited to compete against us. We’re looking forward to the great support we’ve had all season from our fans and hopefully get a sellout.”

“I was disappointed at the way we came out,” UCI head coach Ashlie Hain reflected. “I think we had some nerves and it wasn’t until the third set that we started playing through that. Cal Poly is a great team with great hitters, but I think we beat ourselves for sure tonight.”

Kills and digs were the difference as Cal Poly topped UCI 52-38 in kills and 55-43 in digs. Both teams had three aces and three blocks.

Middle blocker Idara Akpakpa led UCI, hitting .619 with 13 kills and no errors on 21 swings. Harlee Kekauoha followed with nine kills and 10 digs.  Haley DeSales had a team-high 12 digs to go with five kills.

Torrey Van Winden paced the Mustangs with 18 kills, while Adlee Van Winden had 11 kills. Jessica McRoskey had a match-high 13 digs.

UCI struggled offensively to start the match, watching Cal Poly jump out to an 8-3 lead. Trailing 24-17, UCI rallied on three kills by Idara Akpakpa and an ace by Haley DeSales to narrow the margin to 24-22. Following a Cal Poly timeout, Raeann Greisen put away a kill for the set winner, 25-22.

UCI was once again playing catch-up in the third set as Cal Poly took an early 3-0 lead then a 10-4 advantage. With Cal Poly leading 23-20, UCI had a kill and block by Harlee Kekauoha to pull within 23-22. The teams would trade points before another kill by Gresien ended the set 25-23.