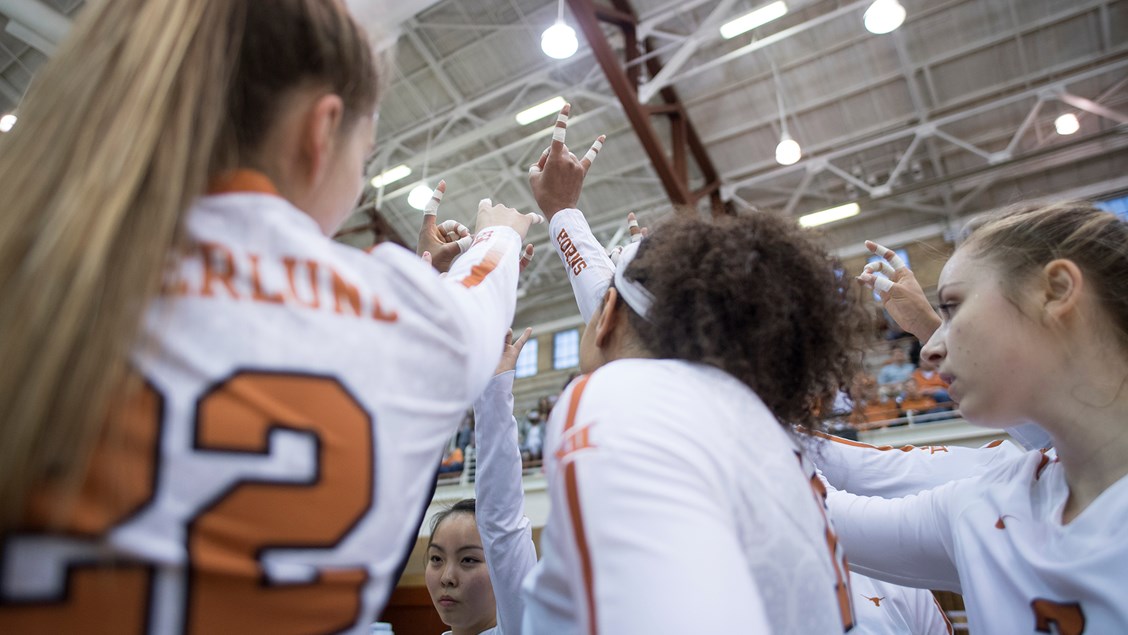 Once again, Texas goes into a season as the favorites in the Big 12. Archive Photo via Texas Athletics

“There will be a lot more new looks in conference this season. We will have to see how the impact of new-comers and development of retainers takes shape.” – Baylor head coach Ryan McGuyre.

“The Big 12 is stacked again this year, every match will be a battle.  Texas, Baylor and Iowa State are considered the front runners, but every team is seriously talented.  There’s more parity this season and it’s going to be a great year for our conference.” – Texas Tech head coach Tony Graystone.

Texas: The Longhorns not just won the conference in 2017, but didn’t even lose a match in league action. It’s quite the dichotomy between players lost and players returning too for the Longhorns, as they bring back four starters led by Micaya White but also lose players like Chiaka Ogbogu, Cat McCoy and Ebony Nwanebu. Still, the roster has always been stocked with powerful options at the front of the net, so whether its newcomers or players returning, the Longhorns are likely to sport one of the top offenses in the country once again, especially if setter Ashley Shook grows in year two.

The question becomes about the Longhorns passing and defense. The former has been a question for the past several seasons now, and while they’ve still been a blue blood program and at the top of the sport, they may have another National Championship or two with better play in that regards. The defense also has questions now after losing Ogbogu and McCoy, but with all kinds of size in the front line and Morgan Johnson back in the middle, they should be okay. More likely than not, Texas will win the Big 12. What could separate them between Elite Eight/Final Four team and National Champion will be that passing – who fills the libero role and other passing spots – and how impactful are redshirt freshman Brionne Butler and true freshman Logan Eggleston, who both look like current and future stars for the program.

Baylor: The Bears are the latest rotation of schools to present Texas with their biggest challenge in the Big 12 since Nebraska left the league. They’ve got a school-record three All-American returning from last season in Shelly Fanning, Yossiana Pressley and Hannah Lockin. They do lose Katie Staiger from the bunch that went 13-3 and collected a second place finish in 2017, but did a lot of that with her out anyway due to injury. Maryland transfer Gia Milana adds to the pin and the Bears are high on redshirt freshman Marieke van der Mark and senior Ashley Fritcher, plus also return Aniah Philo.

The challenge for Baylor is just to take another step forward really everywhere on the court. They were top two in the Big 12 for conference matches in hitting percentage, opponent hitting percentage, assists per set and kills per set while ranking third in blocks and aces per set. To contend with Texas, it’ll take sustained success and a few improvements even at that high of a level. They get Texas at home in their penultimate match, which comes on November 16. If they play their cards right and overcome any trip-ups, that could be for at least a share of the Big 12 title, but they’ll need to have a great passing and serving match whenever they face the Longhorns.

Iowa State: Going into the year, we probably know what we are going to get from Iowa State. They’re going to be a gritty defensive team with a strong serve and pass game. Just like always, the difference in them being moved to that elite level will be based on if they can establish enough offensively. Jess Schaben at outside hitter will be asked to take on the primary part of that load, as the Cyclones hopes of winning the Big 12 would require them being better than fourth in hitting percentage and kills per set. Still, if that happens, they’ve got everything they want from the defense led by libero Hali Hillegas and some talented blockers where they could emerge as the top challenger for Texas – especially since they’ve given the Longhorns more trouble than many other conference teams in recent years.

Kansas: The Jayhawks lose their best senior class the program has seen, and it was incredibly large in terms of quantity and quality. For whatever reason though, they fell apart as season’s end. Maybe the handful of new faces will re-invigorate the program and give new energy, especially because KU brought in a strong recruiting class. Many around the program are high on Gabby Simpson after sitting out last year, while Jada Burse and Zoe Hill could breakout. If some of the former bench players and newcomers step up, this should be an NCAA Tournament team.

TCU: The Horned Frogs made the NCAA Tournament in 2016 on the heels of bringing in a top 30 recruiting class, then added the #24 PrepVolleyball team class in 2017 and the 21st best headed into 2018. Despite the disapoining season last year, they obviously are now loaded with talent. If that finally comes to fruition, they should have all the pieces to head back to the NCAA Tournament once again, especially with seven players with starting experience back in the fold from 2017.

Kansas State: It was a bit obscure to see the Wildcats struggle so much in 2017 after they have established such a strong repertoire and home court advantage. Still, of their 19 losses, seven came in five sets – including five in just Big 12 action. If they turn around two or three of those, that’s a win boost right there. Plus, with five starters back and Kylee Zumach continuing to improve as a force on the pin, the Wildcats should be much better in 2018. And with the openness after the top three, feasting on some lower and middle of the pack teams could put K-State in the postseason conversation.

Oklahoma: The Sooners have lulled of late in the Big 12 after a string of successful league and NCAA Tournament finishes. That led to a new head coach coming on and the dividends have already paid off in bringing on newcomers. Three new transfers grace the Sooners roster led by Oregon State transfer Kylee McLaughlin who will have a go-to option in Alyssa Enneking and a total of five starters back for OU. They should add to their competitiveness and improve in 2018 and trip up some top half teams.

Texas Tech: The Red Raiders had a goose egg in Big 12 wins in 2016, but bounced back with improvement in 2017. Still, there were only four Big 12 victories, but they ended the season on a high by reaching the NIVC Finals. They, along with Oklahoma, give the Big 12 a legit top eight that could win six to eight matches in league play depending on how things fall, especially since Texas Tech have one of the best setters in the league in Missy Owens.

Ten Big 12 matches to keep an eye on:

Of course, several others could be included on this list, and a handful of players are set to breakout in 2018. Considering team projection, player production from past seasons and role in 2018 though, here are five players to watch for Big 12 Player of the Year as we embark on the season’s start (sorted alphabetically by last name):