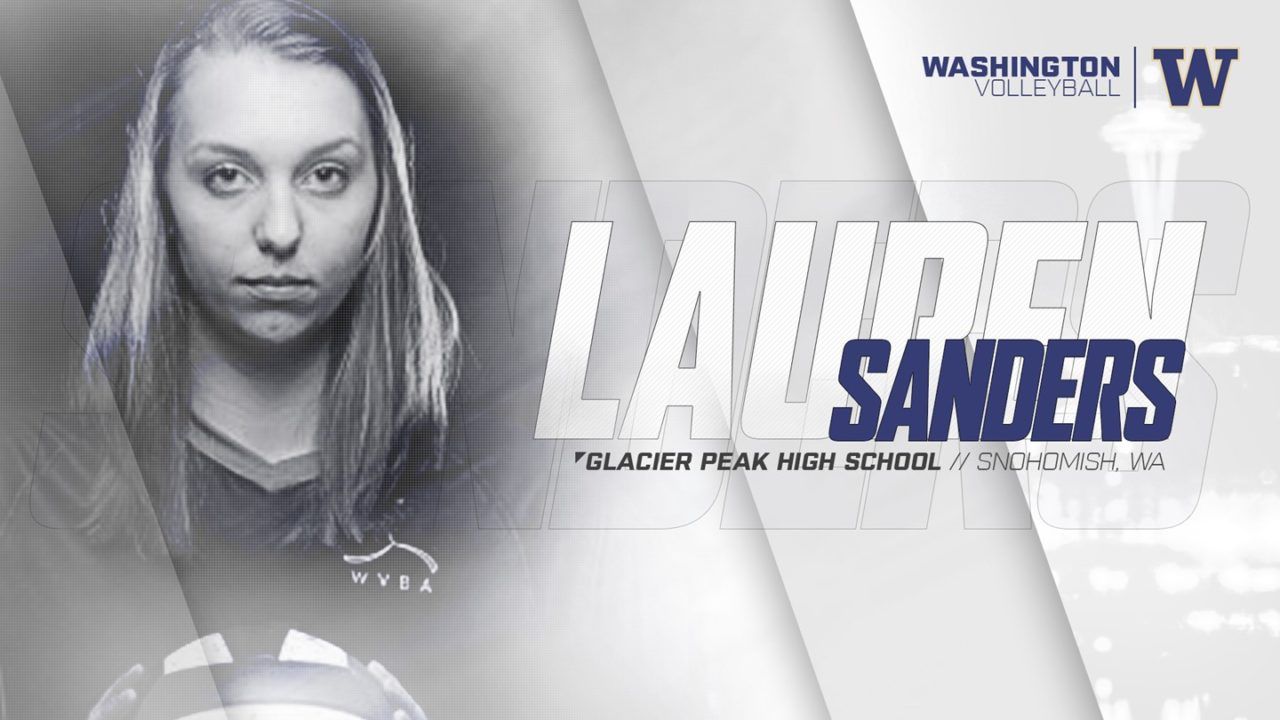 SEATTLE – The Huskies today added one of the nation’s top middle blocker recruits in Lauren Sanders from Glacier Peak High School in Snohomish, Wash. A 2016 U.S. Junior National Team member, Sanders signed her National Letter of Intent and plans to enroll early at UW this spring and will be a freshman in the fall of 2017.

Sanders is 6-foot-4 and was recently named a First Team All-American by the American Volleyball Coach Association, one of five middle blockers on the first team. She was also ranked No. 20 in the PrepVolleyball.com list of Senior Aces, an annual ranking of the top senior players in the country.

“I knew that choosing UW meant not only being part of a team, but a family,” said Sanders. “I loved the idea of playing close to home at a school with great academic and athletic reputations. The volleyball community at UW is definitely something special, and the coaching staff is so incredible and supportive. I grew up going to UW volleyball games even before I knew I was going to play in college, and I can’t wait to finally be a part of it!”

Head Coach Keegan Cook has been able to watch Sanders develop her skills over the past four years and is excited for her to arrive on campus soon. “Lauren has the size, speed, and athleticism to play the game at the highest level,” says Cook. “She has as high of a ceiling as you could ask for of a recruit at that position. Lauren’s an outstanding student, with aspirations to play professionally abroad. That’s certainly a goal that we share for her. We are thrilled to help her strive towards her potential.”

Sanders also gained invaluable experience as part of the 2016 U.S. Women’s Junior National Team, one of 12 women to make the roster and compete at the NORCECA U20 Continental Championships. Team USA took silver at that event in Florida and also went 5-0 at the 2016 USA High Performance U20 Championships. Sanders made the 2016 roster after competing on the 2015 Girls Youth National Training Team.

“Lauren had to work tremendously hard to make that roster. It was an extremely talented team last year,” says Cook. “She made the training team as a sophomore and then she made the final roster as a junior and that was something that was a major accomplishment for her.”

Sanders also plays club for Washington Volleyball Academy, and helped her club team finish first in its region and finish eighth at AAU Nationals in Orlando this past summer.

“Having Lauren join us during the spring training season will be a huge bonus,” Cook says. “Hopefully that can give her a chance to get a running start and spend a lot of time with this team.”