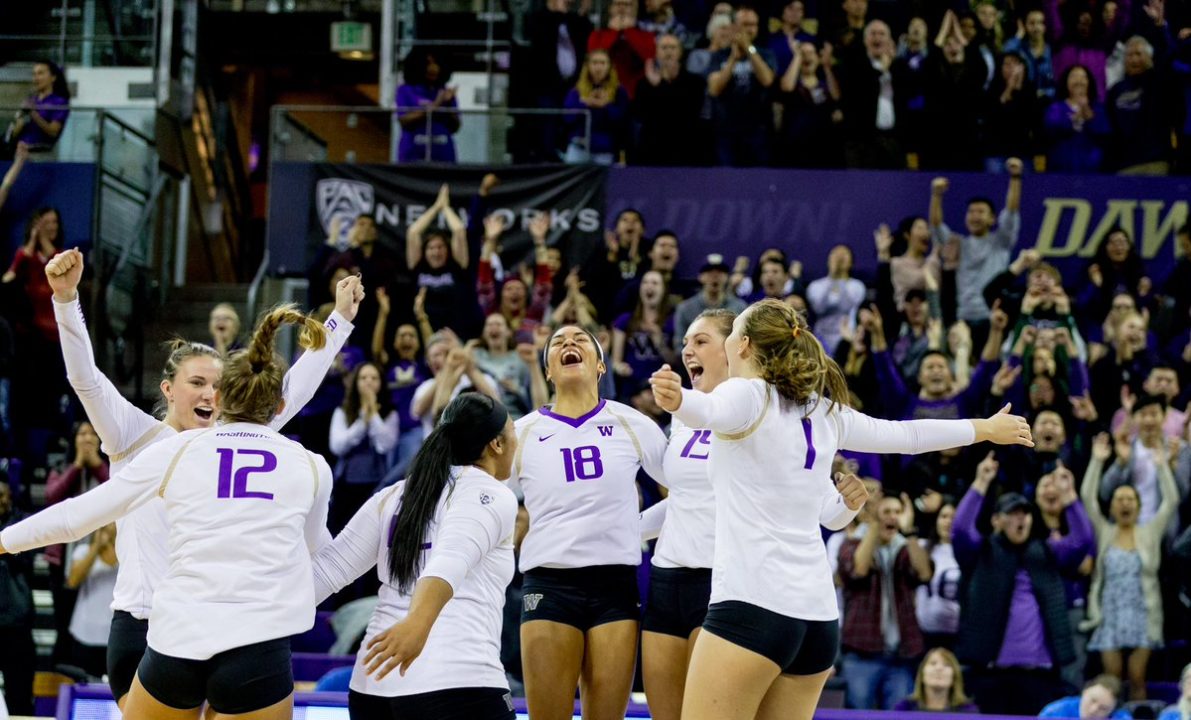 Washington brought in a season-high 4,491 fans for their final regular season match and sweep over in-state opponent Washington State. The Huskies are expecting a top-16 seed in the NCAA Tournament, that will bring them back home for a match next week.

For Washington, Courtney Schwan recorded 11 kills on a .375 hitting performance while Tia Scambray picked up 13 digs. From behind the service line, Kara Bajema posted a match-best five aces, to add to the Huskies 11 overall aces in the match.

With a season-high crowd of 4,491 rocking in Alaska Airlines Arena, the 12th-ranked Husky volleyball team looked postseason-ready in an emphatic 25-19, 25-13, 25-14 sweep over rival Washington State to cap off the regular season. It was a perfect Senior Night for the decorated class of seven Husky seniors playing their final regular season home match, though the Dawgs will be expecting a top-16 seed in the NCAA tournament and a chance to play at home again next week.

“Haven’t felt a crowd that electric in a while,” said Head Coach Keegan Cook. “Certainly a crowd worthy of this group of seniors, so I’m happy they got to play in front of that.

All seven seniors were in the starting lineup together tonight, a group that included setters Bailey Tanner and Jade Finau, outside hitters Courtney Schwan and Carly DeHoog, recent convert from the outside back into the middle Crissy Jones, libero Tia Scambray, and also middle blocker Marion Hazelwood who saw her first action since suffering a broken finger at the end of October and missing the past seven matches.

It is a class that ran its Alaska Airlines Arena record over the past four years to 58-7 with the win tonight, and its total record to 115 wins and just 18 losses, two wins shy of tying the 2015 senior class for most by any UW group in school history.

“I could coach for a really long time, maybe the rest of my life, and not have a class of players that good from both a performance and character standpoint,” said Cook. “Certainly they’re the bar that I’m going to be chasing for the rest of my life as a coach.”

Washington fed off the crowd’s energy to turn in one of its best offensive and serving efforts of the season, hitting .346, a season-high, and collecting a season-high 11 aces. The Huskies held the Cougars to just .106 on offense and WSU, one of the top blocking teams in the league, got just one block tonight on the Dawgs.

“It started from the service line,” said Cook. “A lot of what we’ve been working on this week is being the team we’ve wanted to be all year, and so I liked what I saw from the service line. We made some good moves around the net. I thought we had a few too many unforced errors in those first two sets, but we really cleaned that up nicely in the third and made that our best set.”

Washington finishes the regular season with a 24-7 record and a 14-6 mark in the Pac-12. The Huskies can tie for second-place in the league if USC loses tomorrow to UCLA, otherwise UW will finish alone in third-place, with Stanford taking the league title with just one loss, coming here to the Huskies earlier this month. The Dawgs carried an RPI of eighth into this final week, a good indicator of potential seeding. The NCAA Selection Show will be held this Sunday, Nov. 26, at 6 p.m. Pacific time.

Individually, Schwan had 11 kills, hitting .375 with six digs, three blocks and an ace. DeHoog put away eight kills on a .389 percentage with four blocks, and sophomore Kara Bajema served up a career-high five aces while adding eight kills and a solo block on a .312 attack percentage. Crissy Jones killed six of 10 swings with just one error for a .500 percentage. Tia Scambray led the defense with 13 digs and chalked up two more aces, and Bailey Tanner directed the balanced attack with 31 assists, adding nine digs, two aces, and a couple kills.

Hazelwood got the set from Tanner on the first point of the match and she hit it with her purple cast off the block and out for a kill before subbing out. Schwan and Jones followed with their first kills on their Senior Night for 3-1 in the early going. A back row kill from Bajema made it 4-3 Dawgs. A solo stuff for Schwan tied things up again at 8-all. Scambray floated a serve that dropped to the back line for an ace and a 12-9 Husky lead, and then Schwan rolled one up and down in transition for 13-9 and the Cougars called their first timeout. Scambray kept the Dawgs running as DeHoog landed a right side kill and then Scambray aced WSU up the sideline for 15-9 before the Cougars broke the 5-0 run. The Cougars fought back with two more to pull within 15-12, but Jones hit one down out of the middle to stop the bleeding. Schwan banged one off the block and then dialed up another service ace for 18-13 and WSU used its second timeout. Bajema had a big rip for a kill on the left and Tanner dumped one down for 20-15 Dawgs. Sanders had a kill on the block touch and backed that up with a solo rejection as the Huskies pushed to 23-16. On the second Husky set point chance, Bajema swooped in out of the back row for a booming kill to end it, 25-19. The Huskies hit a strong .370 in the set, with four kills for Bajema hitting .429 and three kills for Jones and Schwan, with three aces also aiding the cause.

Sanders and DeHoog had a couple early kills and then Bajema fired an ace off the defense to build UW a 4-1 edge. Sanders and DeHoog then stuffed down a Cougar left pin swing for 5-1 and the Cougars took an early timeout. Out of the break, Scambray bumped a backset to Schwan who spiked it straight down for 6-1 before Bajema served long to end her strong run. Tanner saved a tight pass by flipping it back to DeHoog for a right side kill, and then Jones had a transition finish on the next rally to extend it to 9-2 Dawgs. Shayne McPherson leaned low for a dig that let Tanner find Schwan who broke through the block for 12-3. Bajema crushed line in serve-receive to keep UW siding out at 14-5. Jones aced the Cougars and WSU then pushed one wide on a free ball for 16-5 and the Cougars used their final timeout. On the next play, Bajema kept Jones’ serve run going with a solo stuff of a slide try. DeHoog finished from the left and then Bajema served up two straight aces for 21-8 Huskies. Schwan finished to bring the Dawgs to set point at 24-13 and then the Cougars found the net on the next rally to end it, 25-13. The Dawgs clicked again on offense in the second, hitting .321 and serving four more aces while the Cougars were held to .061. DeHoog hit five down in the frame with three aces from Bajema.

Tanner got an ace off tape and then Avie Niece who had subbed in teamed up with DeHoog to stuff a rally that Scambray had extended by going into the Husky bench for a second contact save. DeHoog hung up to stuff down a Cougar tip attempt and then Bajema aced the Cougars again for a quick 5-1 start. Scambray served the Dawgs on another five-point blitz as Schwan hit a Tanner set up the left sideline to the corner, and then Schwan had a solo rejection on the left for 8-3 Dawgs. Scambray then laid out for a dig and Schwan put a swing off the tape and it trickled down for a kill for 9-3 forcing the Cougars timeout. Tanner dumped one for a point for 12-5 Dawgs and then Tanner and Niece snuffed out a Cougar swing for 14-6. The Cougars pulled back within five points at 14-9, but the Huskies answered right back with three in a row as Bajema tipped for a kill, then Niece and DeHoog threw up a roof, and Tanner dropped an ace to the back line for 17-9, prompting WSU’s final timeout. DeHoog pounded another Tanner set down and then Bajema lasered another Husky ace for 19-10. Schwan froze the defense again with another roll shot kill and then after Schwan hit one off the block and it bounced up along the net, Jones spiked it down for 21-12. Two more rockets from Bajema’s right arm brought the Dawgs to match point at 24-14, and the senior Schwan appropriately finessed a back row swing to the left sideline and just in on the next point to end it, 25-14. Washington made just one error in hitting .346 in the third set, with four more aces and five big blocks in the set, three for Niece and three for DeHoog.

Junior Taylor Mims supplied 11 of the Cougars 29 kills. Ella Lajosadded eight kills while hitting .400 and Claire Martin had six kills. Ashley Brown had 24 assists and Alexis Dirige contributed 11 digs. Jocelyn Urias had the lone block for WSU, a solo block, and was joined by Abby Phillips in each serving one ace.

WHY & HOW…
WSU Head Coach Jen Greeny said, “First, Washington is a fantastic team and they showed it tonight. They definitely won the serve and pass game and we were really having a hard time getting anything going both offensively and defensively. They are a tremendous serving team and they certainly showed that tonight. It’s hard to win any match when you get aced 11 times. On the other side of that, I didn’t think our serving was very aggressive at all. Those two things combined for not a real pretty night for the Cougs so a lot of credit to them. We were out of system most of the evening and they were in system so it makes it tough to get our block going. That 10 to one blocking stat shows that it all starts at the serving line. We’ll have to get back to the drawing board in the serve and pass game. We have to regroup and hopefully get ready for next week.”

On WSU making a return trip to the NCAA tournament possibility Greeny said, “You never want to leave things in the hands of a committee but the conference that we play in is incredibly tough. And we played a lot of great opponents in the preseason and those teams have done extremely well including a lot of top 50 teams that we had wins against. That should help us. Our RPI is at 37 and we have a top five rating in strength of schedule. I think the wins against Oregon and UCLA really helps us. You would think that puts us in for sure but you never know what the committee is going to do. These next two days will be extremely long to wait for the selection show. We’re battling injuries but this team never says die and just perseveres so maybe we can keep it going.”