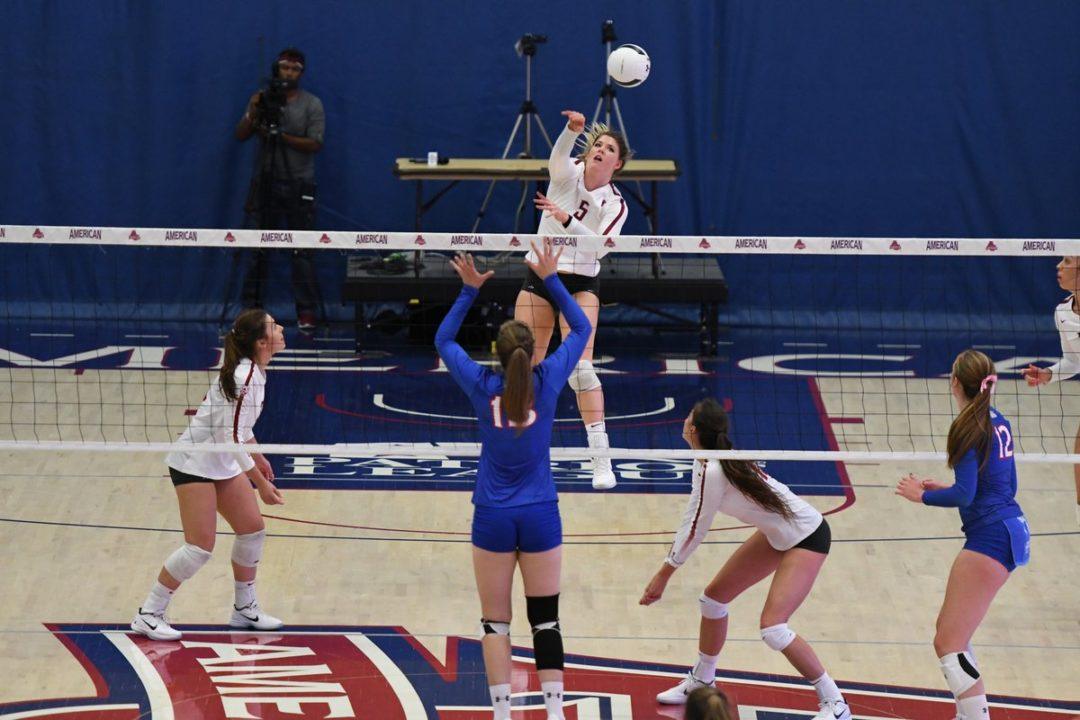 Washington D.C. – In a battle of two 2016 NCAA Tournament teams, it was Washington State coming out with the road win in four sets over Howard.

The Cougars were led by junior outside hitter McKenna Woodford, who logged a match high 18 kills and had the second highest dig total between the two teams with 17.

Tamia Dockery, the younger sister of former Kansas outside hitter Tiana Dockery, helped shift the momentum to Howard after Washington State won the first set. Dockery was a jack-of-all-trades for Howard and posted 31 assists, 16 digs, five kills (.625 hitting percentage), two aces and a block as she helped even the match at 1-1.

Washington State responded with the most lopsided of any of the sets in the third and won a relatively close fourth set to take the match. The Cougars block, which was electric last season, showed out in this one as they out-blocked Howard 11-6 in holding the Bison to a .134 hitting percentage. Washington State on the other hand hit .252 as a team.

The Cougars now head back home to Pullman to get ready for another match on Thursday against Incarnate Word. It will begin a busy two day stretch as they face #25 Baylor later that night followed by a double-header with Quinnipiac and College of Charleston.

Dirige’s 36 digs ties Kate Sommer for the second-highest digs total in a match in school history. Dirige’s 36 digs is a school record for most digs in four sets while Sommer’s 2013 tally came in a five-set match against California.

The Cougars hit .252 on the night and held Howard to a .134 hitting percentage.

WHY & HOW…
WSU Head Coach Jen Greeny said, “We have a lot to improve on which is what you want to see in these preseason tournaments against a very good Howard team that is very used to winning, especially in this gym. I’m proud of this team that we came away with two wins on this tough road trip. It’s going to be a quick turnaround back in Pullman.”I thought we fought hard. I like these tight situations where we either have to fight back or close out a tight set like we did. It was a great trip and definitely gets us on the right track of things we need to work on and things that we’re doing pretty well.”McKenna Woodford started slow but really kept at it and did a really nice job of turning those numbers around to have a great night with a double-double and hitting .286. That’s what we’re going to need out of her. And back-to-back nights of our middles doing a nice job and our setters did a nice job of getting them the ball a bit more.”Alexis had close to 30 digs going into the fourth set and she was all over the place and that’s what we need out of her. I think she is doing a great job of reading around the block. We had 11 blocks but it wasn’t one of our best blocking nights so I thought Lex did a fantastic job of keeping us in match defensively.”

Sophomore Libero Alexis Dirige said, “Our goal as a team going into this match was to just be aggressive. I felt like my defense was very aggressive this game. I went after every ball and was ready to dig anything that came to me no matter how hard it was being hit. Howard was also a very good digging team so I knew I had to just get that one extra dig to give my team the opportunity to win the rally. We won this match because we were aggressive and went after ever ball.”

MARK YOUR CALENDAR…
The Cougars return to Pullman to host the Cougar Challenge Tournament Thursday, Aug. 31 through Saturday, Sept. 2, in Bohler Gym, with teams from Baylor, College of Charleston, University of Incarnate Word, and Quinnipiac competing.

Washington State jumped out an 8-3 lead in the opening set, forcing the Bison to use a timeout. As the first game progressed, HU began to get into a rhythm. Despite WSU taking the first set, Howard built momentum going into game two.

Trailing, 7-5, HU used an early timeout and regained their composure. With the Bison faithful in their corner, Howard went on a 9-3 run and took its first lead of the match, 14-10. HU’s momentum continued as they held an eight-point advantage late into the set, forcing the Cougars into another timeout, 19-11. WSU refused to go away; however, the Bison would tie the match after two games, 1-1.

Early into set three, the Cougars pounced and took a 9-3 advantage. As the game continued, HU battled; however, were unable to gain ground as they trailed late into the set, 20-13. WSU finished the game scoring five-of-the-last eight points while reclaiming the match lead, 2-1.

Despite both squads going back-and-forth, the Cougars held a 19-17 lead late into game four. Howard fought back and stayed into striking distance, but Washington State would hold off the Bison to take the match, 3-1.

For Washington State (2-0), McKenna Woodford produced a double-double with 18 kills and 17 digs. Defensively, Alexis Dirige manufactured 36 digs in the victory.

Howard (1-3) goes West for the Fullerton Classic (Sept. 1-2) where they will meet Southern Utah, San Jose State, and Cal-Fullerton.