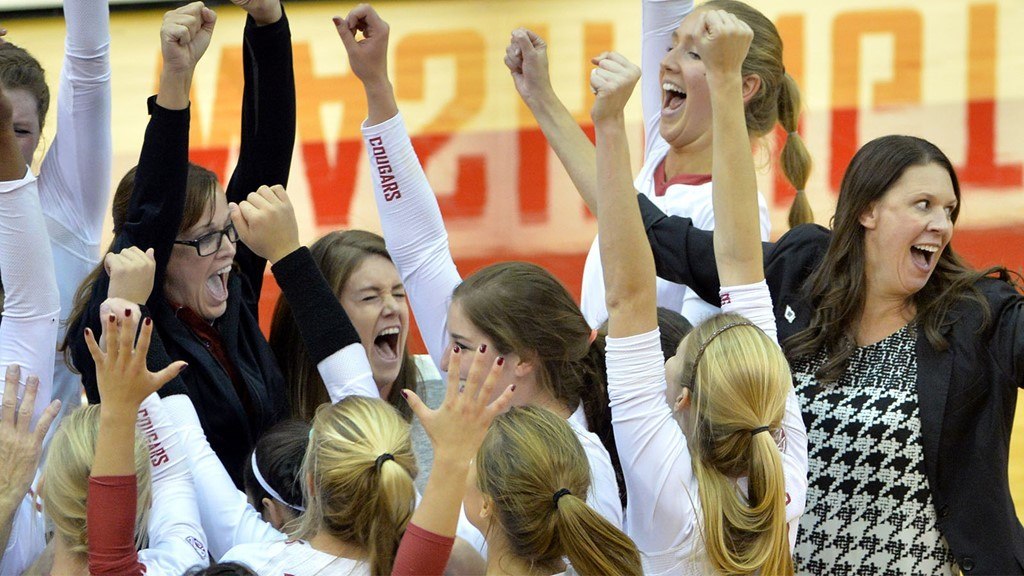 With the win, it is the third consecutive win over a higher-ranked opponent for Washington State.

This was WSU’s fourth win over the Cardinal in 61 matches, and the first time the Cougars have defeated Stanford since 2002: a 3-1 win in Pullman.

“It is a huge win against a really good Stanford team,” Cougar Head Coach Jen Greeny said. “I felt that our team was really resilient tonight. There were some ups and downs but we stuck with it. And to get it done in five, it is just a tremendous victory for this team, and another step in the right direction,”

It was a battle of the top blocking teams in the nation as Mims led the Cougs with eight blocks with Claire Martin adding seven and Schoenlein adding five more. WSU, ranked third in team blocks per set coming into the match, was out-blocked by Stanford, second nationally coming into the contest, 17 to 16. The team hitting percentages were not stellar with WSU hitting .133 and Stanford hitting .117, but the other aspects of the Cougars’ game made the difference in the match.

WSU won the digs battle with freshman Alexis Dirige leading the match with a career-high 26 of the Cougars’ 62 digs. Stanford had 54 digs. This is the third match of the 2016 season that WSU has served eight aces with Woodford and Stephens each contributing a pair and a strong receiving effort kept the Cardinal at three aces.

“We’ve always had the passion,” Holt said about this historic win. “It’s just believing in ourselves and transitioning from practice to the game, and that’s all we did. We just had to make adjustments to their adjustments later in the game and I think we did that perfectly, that’s why we won. It means everything having the support from everyone in Pullman is just awesome, and it really helps us.”

When asked about spreading out the offense opportunities to different players Greeny said, “That’s very important. It all starts with our passing. When our passing is on we can really get our middles going. Taylor Mims was very involved, had a great match.”

“It feels absolutely amazing,” senior setter Haley MacDonald said. “Fifth sets were not our thing last year and previous years so to come out and stay poised and win in the fifth set is awesome. Great victory.”

Washington State improves to 13-2 overall and remains undefeated in the Pac-12 at 3-0. The Cardinal drops to 9-3 on the year and 3-1 in the conference. Stanford, which is the only Pac-12 team to have yet to play a home conference match, is now 3-3 in five-set matches in 2016.

It was a poor offensive outing for both teams, which combined for 73 attack errors. Washington State out hit Stanford .133 to .117, while the Cardinal held a 17.0 to 16.0 edge in blocks. It was the first time this season the Cardinal hit under .200 in a match.

After evening the match at one apiece, the Cardinal appeared in the driver’s seat leading the third 23-18. However, an 8-1 run by the Cougars gave them the set and the momentum. Stanford held on late in the fourth to force the final frame, but it was all Washington State in the fifth. The Cougars hit .529, notching nine kills on 17 errorless swings in the set.

Stanford returns to The Farm next week for its first home match in nearly a month as it hosts No. 20 Colorado and Utah. The Cardinal and Buffaloes square-off on Friday, Oct. 7 at 6 p.m. on Pac-12 Network, while the Utes come to Maples on Sunday, Oct. 9 at 1 p.m.