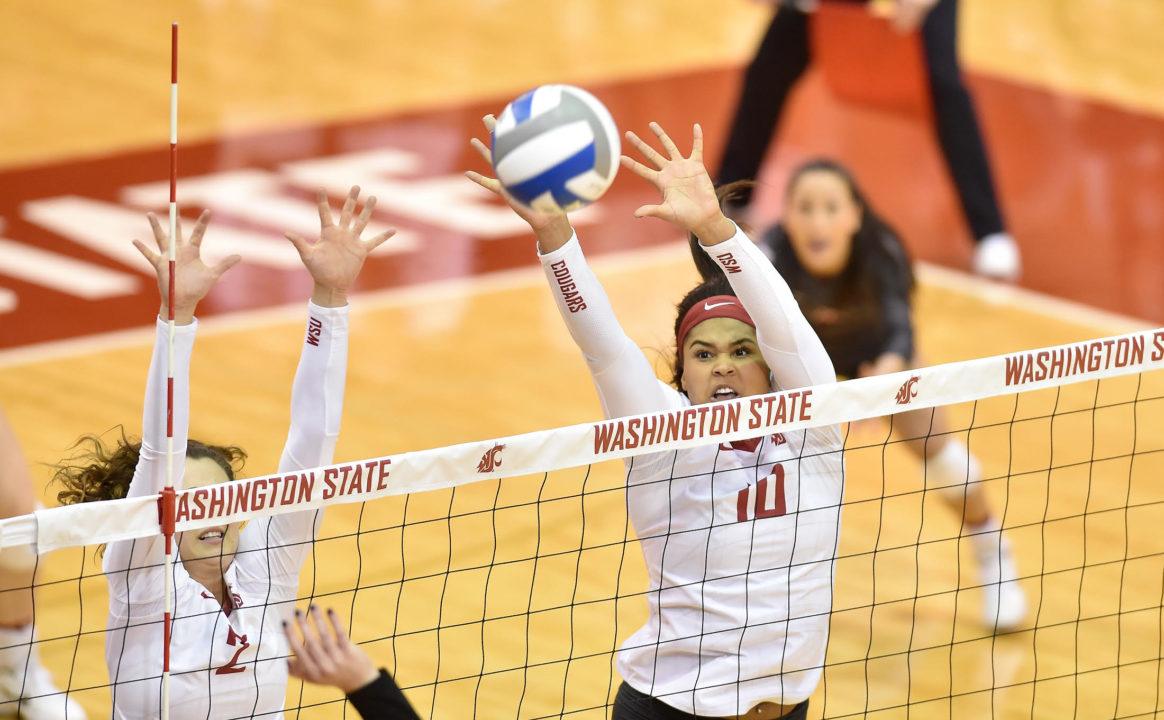 Pullman, Washington – On a day of double-headers for both teams, it was the hosting Washington State squad that came out on top in three sets for the victory behind a strong block and efficient attack.

The blocks went 10-3 in favor of the Cougars, who also hit .394 to Incarnate Word’s .219. Junior middle blocker Ella Lajos was proficient at both, leading Washington State with 10 kills, and doing so on a .571 hitting percentage, and a team-high six blocks. Jocelyn Urias and Casey Schoenlein also added four blocks a piece on the night.

Senior outside hitter/middle blocker Sarea Alexander was dominant for Incarnate Word in the losing effort. She led everyone in the match with 13 kills, and amazingly did it on 15 swings with no errors, good enough for an .867 clip. Not everyone on her team had clean matches though, as they logged 17 attack errors (plenty from the Washington State block) to the Cougars’ nine errors in attack.

Washington State has their prime time match tonight as they face #25 Baylor. A win could propel them into the top 25, assuming they can take care of business with Quinnipiac tomorrow as well.

Incarnate Word moves back to .500 on the season after they scored a five-set victory over Quinnipiac earlier in the day. They didn’t get to play their first three matches of the season last week as Hurricane Harvey cancelled their opening play in San Antonio, but now they will look to keep things rolling with another match tomorrow against College of Charleston.

WHO WHAT WHEN WHERE…
PULLMAN, Wash. — The Washington State volleyball team (3-0) hit a season-high .394 in the 25-17, 25-21, 25-18 win over the University of Incarnate Word Thursday afternoon in the second match of the Cougar Challenge Tournament at Bohler Gym.

WHY & HOW…
As a team, WSU had 37 kills with nine errors in 71 attacks for the .394 hitting percentage. This was the 22nd time in school history and the second time in the WSU Head Coach Jen Greeny era that the Cougars have committed nine or few errors in a match.