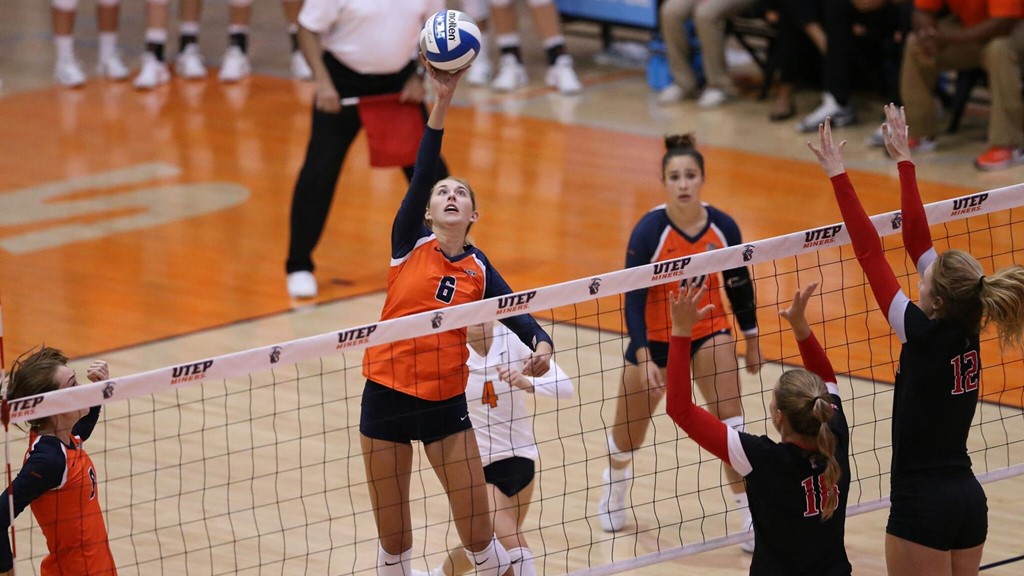 Texas Tech took on in-state rival, University of Texas-El Paso and defeated the Miners in the UTEP home opener at Memorial Gym in El Paso. This match was the third of the North Texas Invitational which featured Texas Tech, Montana and Tulsa in addition to the hosts, UTEP.

Texas Tech was led by Long Beach State transfer, Missy Owens, who recorded 15 total points with a .750 hitting efficiency with 13 kills, 49 assists, 4 blocks and 6 digs. Owens was the most efficient attacker for Texas Tech, but the Red Raiders got help from Emily Hill, Chandler Atwood and Katy Keenan who contributed 15, 16.5, and 14.5 points respectively to take the win.

On the other side of the net, freshman outside hitters, Cheyenne Jones and Macey Austin led the Miners with 15.5 points each. Mallory Yost also recorded a 13.5 point performance for the Miners to balance out the attack from the Austin and Jones.

UTEP relied on their defense to stay in the match with 13 blocks to Texas Tech’s 10. However, Texas Tech was able to pull out the win by edging out the Miners in the majority of point scoring statistics including kills (72), hitting percentage (.261) and total points (86).

“When push came to shove, we learned we had a little left to give and that was good to see,” head coach Tony Graystone said. “The sets we lost we were right there. We have to learn how to close a little bit better. Every time UTEP made a run, they really made us work. I really saw a lot of good things about us, how hard we were able to fight back and scrap in another team’s gym.”

Junior setter Missy Owens led a versatile Red Raider attack, dishing out a season-high 49 assists while spraying a career-high 13 kills of her own with a .750 attack percentage, which is the ninth best single-game clip in school history. Joining her in double-figures was sophomore Chandler Atwood, who had a career-high 15 kills to lead all players in the match, sophomore Emily Hill with 14 and junior Katy Keenan, who tied a career-high with 12.

Defensively, junior libero Reyn Akiu posted a season-high 30 digs. The Red Raider block came on strong as the match progressed as the team finished with 10 total blocks on the night. Among those were five block assists from Keenan, which matched her career-high, and four each from Owens and freshman Allison White.

UP NEXT
Texas Tech will now continue west, heading to Berkeley, Calif., for three matches at the Cal Classic. Tech takes on Eastern Washington Friday, Sept. 1, at 6:30 p.m. CT, before a Saturday doubleheader in which it faces Dartmouth at 2:30 p.m. CT and Cal at 9:30 p.m. CT.

MORE FROM GRAYSTONE
On Missy Owen’s offense
“I know she’s got it in her to be that offensive. We don’t usually game plan for it to be that way, but I love it when she decides she’s going to take over and work points that way. Hopefully we took her out of her box tonight and she can start being more aggressive all the time.”

On the starting lineup
“With Sarah (Redding) being out tonight, we wanted to put Chandler’s block on the right side. I think ultimately it was good to see it play out the way it did. We got Haley Harman in there, and I thought she was a real difference maker tonight.”

EL PASO, Texas- The UTEP volleyball team, riding on the momentum from a loud home crowd, fell to Texas Tech 3-2 in a thrilling match that ended in extra points in the fifth set in Memorial Gym on Wednesday.

“It was exciting because the fans had a lot of energy here, our team was giving out a lot of energy and we were fighting for every point,” head coach Holly Watts said. “Obviously we wanted the five-set match to go the other direction, a play here and there really makes a difference when it (fifth set) ends up 18-16.

The Miner offense was led by Macey Austin, who hammered down 15 kills at a .265 clip with one block assist, Cheyenne Jones, who notched 13 kills with a .212 hitting percentage and five block assists, and Briana Arellano and Mallory Yost, who both recorded 10 kills. Arellano also tallied six digs, two service aces and two block assists while Yost, hitting at a .304 percentage, led the team in block assists with seven. Six-rotation player Amanda King was an all-around force for her team, dishing out 48 assists and notching six kills. The senior setter also three digs and teamed-up for six block assists.

Defensively, UTEP was paced by libero Niki Cebak with 17 digs while Ashley Grzebeniakadded 10 of her own.

A blocking effort helped stop the Red Raiders, as the Miners teamed up with 26 block assists in the game.

Set one began with Texas Tech blanking the Miners 6-0 before a kill by Jones put the Miners on the board. The Orange and Blue then capitalized on Red Raider errors with kills of their own, combined with four block assists to get within one point of Texas Tech, forcing them to take a timeout. Another Jones kill right out of the timeout tied the set at 15. The two teams would tie one more time at 17-all, before a Miner push, led by two more Jones kills and a kill apiece by Arellano and Austin as well as a block assist from Maddie Morgan and Arellano, ended with a 25-23 set one victory.

The Red Raiders would get the best of the Miners in sets two and three, but the Miners kept fighting in set four, including climbing from a 11-5 deficient, to tie the game at 14 after consecutive service aces by Arellano and back-to-back block assists by freshman duo Jones and Yost. With the momentum to their advantage, the Miners then began to work for the lead, allowing the Red Raiders to tie the set only twice more before the held a 21-17 advantage. Five consecutive Texas Tech kills, however, evened the score at 22, but the Red Raider run was stopped by a service error and an Austin kill picked the Miners up 24-22. Texas Tech would answer back with a kill, but Austin put the period on set four with her third kill of the match, giving the Miners the 25-23 set  victory and forcing a fifth set.

The fifth set had Texas Tech in control at first, with the Red Raiders getting a 7-3 to force a UTEP timeout. Yost then came back on the court and stopped the run with a kill, but Tech’s Katy Keenan mirrored her with one of her own to keep the Miners down 8-4. A block assist by Jones and Kylie Baumgartner, followed by a Texas Tech attack error, began the shootout for the lead by both teams. The teams would tie five times as they battled for the game victory, and at 15-all, Texas Tech’s Emily Hill, who had 14 kills for her team, would hammer one down to give the Red Raiders 16-15 advantage. Not giving up, Arellano answered with a kill of her own to again tie the set at 16. It would be the last point for the Miners, as a UTEP service and attack error would end the set 18-16 and the match.

Despite the loss, Watts was pleased with her team’s grit in the five-set drama.

“It motivates us for tomorrow, and then tomorrow, and then tomorrow, so I think every time we can come out and put out our best effort and fight,” she said. “I think we battled for every point. We started in the hole sometimes and that part is a little frustrating so we’ve got to get better at coming from behind. I think we did a great job of battling for points and competing all the way through and not giving up. We were down a bit early and we just fought and fought and fought.”

The Miners will return to action Friday and Saturday in the first of two home tournaments, the Glory Road Invitational. The team will open the tournament with a meeting with New Mexico at 7:30 p.m. (MT) on Friday at Memorial Gym.