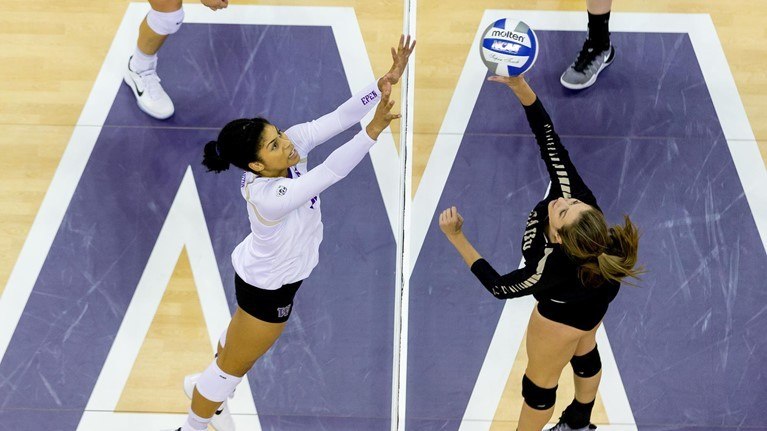 After sitting for a week the sixth ranked Washington Huskies took out Utah Valley in straight sets in their first match of three at the Hawaii Outrigger Resorts Challenge. The Huskies posted 13 blocks in the 25-10, 25-20, 25-17 win.

Utah Valley’s Alexis Davies led the Wolverines with nine kills and three blocks. This was the Wolverines second match against a top-25 team this season, when they previously fell to 14th-ranked Hawaii in straight sets.

HONOLULU – With its best blocking effort of the young season, the sixth-ranked Huskies took care of Utah Valley in straight sets in its first of three matches at Hawaii’s Stan Sheriff Center. Washington (6-0) had 13 blocks in the 25-10, 25-20, 25-17 win in its first match in Honolulu since 2008.

The Huskies hit .337 as a team, including a .609 percentage in set one when they came out on fire after having not played a match in a week’s time. Stats all fell in UW’s favor, as the Huskies had 44 kills to 28 for the Wolverines, and an edge in aces (5-2), digs (45-37), and blocks (13.0-7.0). Junior Crissy Jones led the Huskies with 11 kills on a .450 attack percentage with a career-high-tying eight blocks, and sophomore Destiny Julye had a season-high 10 kills hitting .292 with a career-high five blocks.

Bailey Tanner totaled 23 assists and seven digs, and freshman Shayne McPherson tallied a team-leading 13 digs. Freshman Kara Bajema also had seven blocks with five kills, and Courtney Schwan had six kills, hitting .429, and had 10 digs and a pair of aces.

“You’re always pleased when you give your players a focus and they take responsibility and make it happen,” said Head Coach Keegan Cook. “There was an emphasis on serving and blocking, and I thought they took a lot of responsibility for making that better.”

Destiny Julye secured the first kill of the day on the first point. She then teamed with Crissy Jones for a block assist, and connected for a second kill for a 3-0 Husky lead. Tia Scambray and Jones got their first kills for 5-2. A Wolverines overpass of a Jones serve was punched down by Kara Bajema for a 7-2 lead to force UVU into a timeout. Courtney Schwan‘s first kill was followed up by a block by Schwan and Bajema for 10-4. A second-straight roof, this one from Bajema and Bailey Tanner was followed by an ace from Scambray to make it 12-4. Jones struck for a couple emphatic kills out of the middle set by Tanner as the Huskies doubled up UVU, 16-8. Julye floated an ace for a 10-point lead at 19-9 and Jones and Bajema notched another point with a rejection. The Dawgs got to set point after Tanner hit down an overpass off a tough Jones serve, and Scambray ended it on the next rally with a kill up the left sideline to win the set, 25-10. The Huskies hit a scorching .609 in the first set, their best set mark on the year, with Jones rolling to six kills on eight swings, and UW getting five blocks to hold UVU to .037.

Tanner got the second set started off right with an ace. Another ace from Schwan caught the tape and dropped over and Julye pushed down an overpass to help UW to the early 6-3 lead. Carly DeHoog made her first appearance and got a block on the right side and added her first kill moments later for 9-7. The Wolverines had a 5-0 run to take their first lead at any point at 9-12 and the Huskies had to take a timeout. Schwan snapped the Huskies out of that funk with a roll shot. Jade Finau came up with a dig and Schwan set Scambray for a kill to get UW within one. The Huskies tied it at 14-all as DeHoog punched through the blockers. A UVU error got the Huskies back in the lead, 15-14. A couple kills from Julye on the left pin kept the Huskies moving forward with a two-point lead. Jones bumpset Julye for another after a Tanner dig and she swung off the block and down for 21-18 and UVU took time. Julye got part of a block out of the break and then went offspeed for her sixth kill of the set to make it 23-18 and the Wolverines took another timeout. Utah Valley got a pair of points back, but then served into the net to get to set point. On the next point, Scambray rose up to roof the UVU swing straight down to end it, 25-20. The Huskies hit .205 in the second set with Julye’s six kills leading the way.

The teams were even through the first 10 points of the third set, but the Dawgs pushed out to a 10-7 lead as DeHoog and Julye ended a long rally with a block. Freshman Cailin Onosko checked in for the first time and got a dig that led to a Schwan kill for 11-7 and a UVU timeout. A kill from Jones out of the middle and an ace from Schwan was followed by a rejection from Jones and Julye as the Dawgs made it 15-10. DeHoog tipped one over the block and down and Scambray floated an ace off the defense for 19-14 and UVU used its final timeout. Schwan had a tough swing from off the net crosscourt for the kill for 20-15. Julye and Jones had a stuff and Julye added a kill to get the Dawgs to match point. A final block, the 13th of the night, ended it for the Huskies at 25-17, with Jones and Schwan teaming for the stuff. Washington outhit the Wolverines, .306 to .122, in the third, and had five blocks. Schwan, Jones, and DeHoog all had three kills apiece.

HONOLULU – The Utah Valley University volleyball team found itself on the wrong end of a 3-0 decision to a nationally ranked opponent for the second consecutive night on Friday, as it fell to No. 6 Washington at the Hawai’i Outrigger Resorts Challenge in Honolulu (25-10, 25-20, 25-17).

With the loss, the Wolverines drop to 3-6 on the season while the Pac-12 Huskies improve to a perfect 6-0 with the victory.

“The girls really worked hard, but we got beat by a very good team tonight,” head coach Sam Atoa said. “We’re determined to keep getting better and we’re looking forward to Saturday’s match against Northern Illinois.”

The Pac-12 Huskies didn’t waste any time getting things going as they jumped out to a quick 11-4 advantage in the opening set. The Wolverines countered back with a 5-1 spurt to pull within 12-8 thanks to kills from Lexi Thompson, Madison Dennison and Brighton Taylor. But that was a close as UVU would get, as UW would go on to take the opener by a score of 25-10 following a 10-2 run.

Trailing 8-6 early in the second game, Utah Valley managed to reel off a 6-1 run to take a 12-9 lead. Alexis Davies led the rally with a pair of kills, while Dennison and Sierra Starley added a block assist and Madi Wardle chipped in an ace. The Huskies later answered back with a 6-1 run of their own to take a 17-15 advantage. The Wolverines pulled to within one on a couple of occasions but couldn’t manage to get over the hump, as UW went on to take the set by five.

The third set stayed close in the early stages as both teams seemingly traded points. With Washington later holding to a two-point lead at 12-10, UW managed to drive home a trio of consecutive points to extend its lead to 15-10. Utah Valley pulled to within two, at 16-13, after back-to-back kills from Davies, but the Huskies would respond with another late run to put the match away in straight set thanks to a 25-17 third-set victory.

Davies paced UVU offensively in the contest with nine kills while Taylor and Thompson each chipped in six. Dennison led the Wolverines at the next with five blocks and Starley dished out a match-high 24 assists.

Crissy Jones led the Huskies with a match-high 11 kills and eight blocks.

The contest marked the second straight in as many days for the Wolverines against a nationally ranked foe, as they previously fell to the host and 14th-ranked Rainbow Wahine in straight sets on Thursday.

The Wolverines will wrap up play at the Hawai’i Outrigger Resorts Challenge on Saturday at 4 p.m. MT/noon HT against Northern Illinois. Following the conclusion of the Saturday contest, UVU will return to Orem to host in-state rival Utah State on Tuesday, Sept. 13 at 7 p.m. in the UCCU Center.