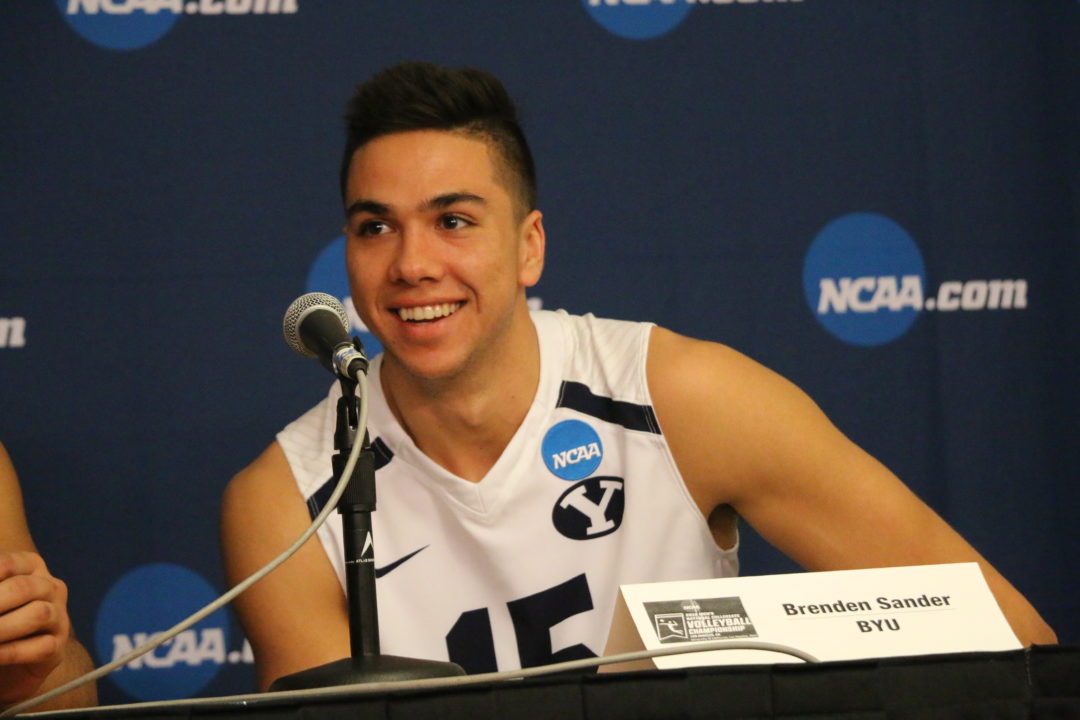 Thursday's semi-final loss to UCLA marked the end of the 'Sander Era' for the BYU Cougars. Current Photo via Anne Lepesant

BYU men’s head volleyball coach Shawn Olmstead said he was still raw with emotion after his team’s 3-1 semi-final loss to UCLA on Thursday in the semi-finals of the 2018 NCAA Men’s Volleyball Championship tournament.

“Like I told the guys, you try to, as a coach, say the perfect thing or exactly what they want to hear in the moment. I’m going to be honest – it’s tough. So I don’t know if I have the exact words for these guys, but I’m proud of them. This team has been through more. We know that  in the locker room, it’s not things we share with everybody. It’s no excuse. It’s just important for these guys to remember.”

When asked about retiring a #15 in honor of graduating BYU senior Brenden Sander and his older brother Taylor, who both wore the number for the Cougars, Olmstead first joked that he too wore the #15 for BYU, but his tone then became serious.

“I’ll get emotional and again it’s just raw, I’m a coach. Maybe i t’s because I’ve got a five-week-old at home. Maybe I’m a little more emotional. But Brenden probably doesn’t even know – the first time I met Brenden was here on this court. He probably doesn’t even remember. Yeah (looking at Sander), see he doesn’t. But his mom asked me – I was coaching the women’s team and I was here watching the boys – they played, what Irvine in that final the last time UCLA hosted? His mom came up to me and said ‘Hey, can you go talk to my son? I really, really want him to go to BYU.’ I think you (Sander) were still undecided and you were with Jake hanging out. So it’s fitting that we’re here. I can’t speak, Taylor – he’s a great kid – I didn’t get to coach Taylor. But I got to be a part of Brenden’s life – a small part. He
came to BYU, he was willing to take on the ‘You got to fill your brother’s shoes,’ and you didn’t back down from that. If you have to do a draft of the greats that have come through BYU volleyball and the outside hitters, you’re probably going to pick Taylor and Brenden. Brothers. And so that’s what they mean. I wish his parents were at the age to have another one. I love him. He’s accepted that challenge and every single match we played in his four-year career he heard it, ‘You’re not like your brother.’ And he just got better and better and better. He is as good as his brother and he’s an outstanding young man. Again, it’s kind of fitting—it’s unfortunate that it’s a loss—but it’s fitting that we’re here at UCLA on this court where I first met him.”

The  loss marks a bit of an end of an era for UCLA, who will also lose both of their assistant coaches after this season.

Watch the video below with Olmstead, Sander, and senior setter Leo Durkin.