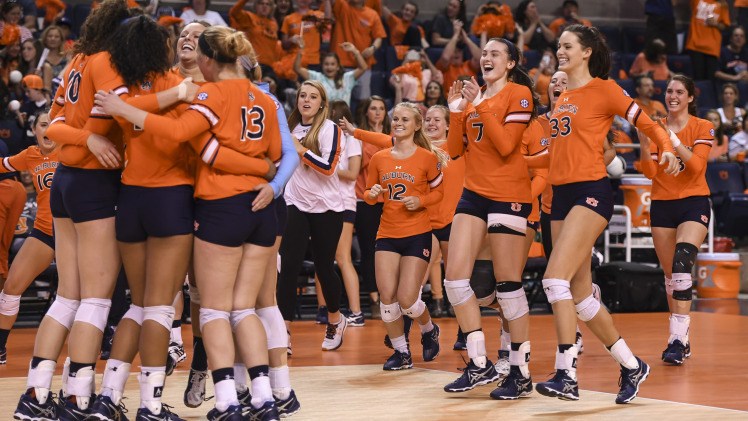 Auburn pulled in their third largest crowd in history with 1,407 in attendance. This didn’t phase the Tigers as Enija Bidzane put down 14 kills, Gwyn Jones added 11 and Breanna Barksdale contributed 10 with six blocks. Alexa Filley recorded a double-double with 43 assists and 10 digs. Defensively libero Jesse Earl picked up a match-high 24 digs.

Despite a big hitting night for Krystal Rivers, who put down 21 kills, the Crimson Tide couldn’t get past the Tigers. Abolanle Onipede picked up her deason-best 10 kills on a .533 hitting percentage, while Leah Lawrence contributed four aces, tying a career-best.  Setter Shannon Mikesky got her eighth double-double of the season with 41 assists and 12 digs.

Alabama committed 33 costly errors in the match, in comparison to Auburns 11. The Tigers held the Tide to a .124 hitting percentage, while hitting .278.

“We had a great crowd out here tonight,” head coach Rick Nold said. “The team played with a resilient attitude and it was probably one of our best defensive performances all season. Everybody at different times stepped up and made plays. We moved the ball around well and were balanced offensively.”

Sunday’s attendance was the third-highest crowd in Auburn volleyball history.

A trio of Tigers (9-10, 3-3 SEC) had double-digit kills on the day. Freshman Enija Bidzane led the way with 14 kills, while classmate Gwyn Jones finished with 11. Senior Breanna Barksdale chipped 10 kills and junior Macy Reece added nine. Junior setter Alexa Filley picked up another double-double on the season, having 43 assists and 10 digs.

Defensively, junior libero Jesse Earl had a match-best 24 digs and classmate Kelly Stewart finished with 10. Barksdale had a hand in six of Auburn’s 10 blocks, while Bidzane totaled four.

Tied at seven to start set one, a kill by Jones followed by a pair of Bidzane/Barksdale blocks triggered an Auburn run that pushed the Tigers to a 15-8 advantage. The Tide put together a five-point run to come within three at 18-15, but Auburn closed out the set with four-straight points to win 25-19.

A five-point Alabama run pushed the visitors to a 11-7 lead in the second stanza. Auburn battled back to go ahead at 14-13, but another 5-0 Tide rally put UA up 23-18. The Crimson Tide took the second, 25-21, and the teams went into intermission locked at one set apiece.

Auburn capitalized on early Alabama errors to push a 6-3 lead in the third and a solo block from Courtney Crable triggered a 4-1 Tiger run to make it 12-7. The teams exchanged sideouts throughout the rest of the set before kills from Jones and Filley made it 22-16. Barksdale sealed the set win with a kill, 25-19.

Kills by Barksdale and Reece made it 4-3 Auburn in the fourth and four-straight Alabama attack errors pushed AU to a 9-5 lead. The Tide attempted to chip away at the Tiger lead and came within three at 17-14, but a kill from Reece sent Auburn on a 5-0 run for a 22-14 lead. Back-to-back kills from Bidzane gave Auburn the match, 25-19.

Auburn continues its homestand, hosting Georgia and Mississippi State. The Tigers welcome Georgia for a Wednesday night match, Oct. 12, at 7 p.m. CT. Auburn and MSU face off Sunday, Oct. 16, in a 1:30 p.m. CT match. Both contests will be televised on SEC Network.

Alabama (13-5, 2-3 SEC) dropped the opening set before evening the match with a 25-21 win in the second. Auburn (9-10, 3-3 SEC) came out of intermission and won back-to-back sets by scores of 25-19 to secure the four-set victory, snapping a five-match winning streak by the Tide over the Tigers. Abolanle Onipede ended the match with a season-high 10 kills and .533 hitting percentage while Leah Lawrence tied a career high with four aces. Shannon Mikesky notched her eighth double-double of the season with 41 assists and 12 digs.

The teams traded points evenly early in the first set, with the first two-point lead for either team coming off an Auburn block to give the home team a 9-7 advantage. The Tigers scored two more to lead 11-7 at the Tide’s first timeout and extended the lead to 14-8 when Alabama was forced to burn its second timeout. Auburn eventually moved ahead by eight, 18-10, before Alabama scored three-straight points to cut the deficit to five as Auburn took its first timeout up 18-13. Lawrence scored back-to-back service aces out of the break to bring the Tide within three but Auburn broke the streak with a kill to make it 19-15. The Tigers took its second timeout leading 19-17 and leading by two later in the set, 21-19, Auburn would close out the win with four-straight points, 25-19.

Trailing 6-4 early in set two, Alabama would swing momentum back in its favor with a 7-1 run to lead 11-7. Auburn fought back with a 7-2 run to take a 14-13 lead before a kill by Krystal Rivers and a solo block by Brittany Thomas gave Alabama a 15-14 lead at the media timeout. Later, tied at 18-18, Alabama scored three-straight points capped by Lawrence’s third service ace of the day to make it 21-18 as Auburn took its first team timeout. The Tigers took its second timeout on the very next point after a kill by Rivers made it 22-18 but the Tide would hold on to win the set, 25-21, and even the match at 1-1.

Alabama scored the first point in set three but Auburn quickly grabbed the early momentum, pulling ahead 11-6 after three-straight points as the Tide took a timeout. The Tigers held on to its five-point lead for the remainder of the set, eventually pulling ahead by a final margin of six points to win, 25-19, and take a 2-1 match lead.

Tied at 5-5 early in set four, Auburn scored three-straight points to move ahead 8-5 as Alabama took a timeout. The Tigers doubled its lead to 13-7 at the halfway point and the Tide was forced to burn its second and final timeout. Alabama would draw within three points after an ace by Krystal Rivers made it 17-14 but that would be as close as the set would get as Auburn charged ahead to win the frame, 25-19, and the match, 3-1.

Next up, the Tide will have a quick turnaround before its next match, hosting Mississippi State (11-8, 3-2 SEC) on Wednesday, Oct. 12 at 8 p.m. CT in Foster Auditorium. The match will air live on ESPNU.