What Shadow? Brionne Butler Has Emerged In the Aftermath of Ogbogu 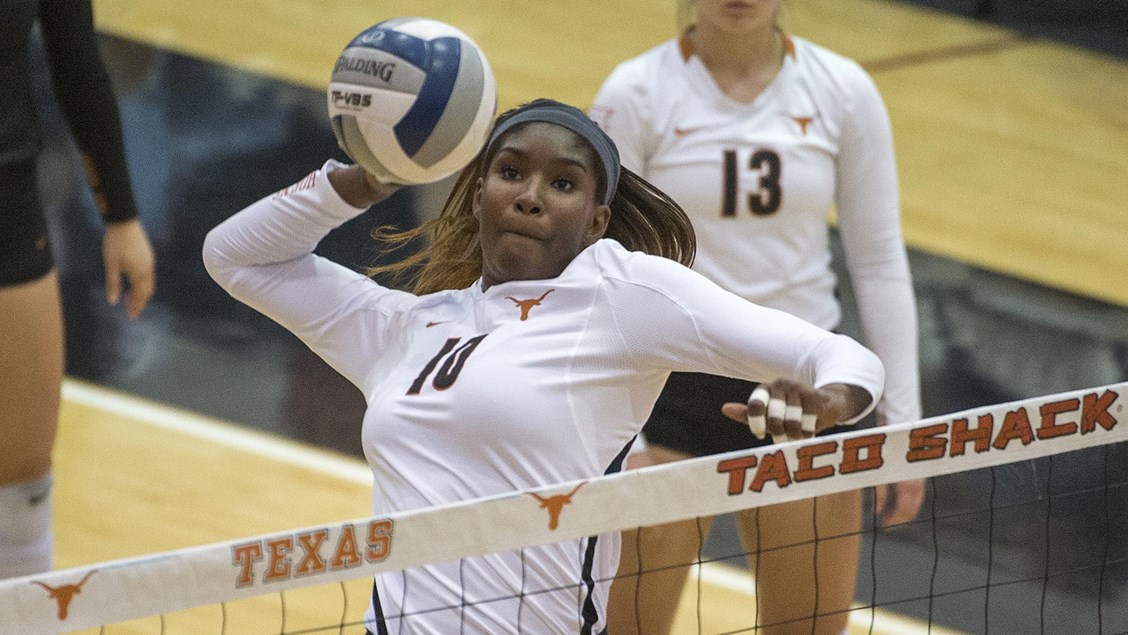 One of NCAA women’s college volleyball’s best kept secrets – well, maybe not that big of a secret with her recruiting prowess – coming into the year was Brionne Butler. The 6’4″ middle blocker is in her freshman year now and more than living up to the hype after taking a redshirt in 2017.

Butler came into the program as the number two recruit in the country according to PrepVolleyball. Taking the redshirt allowed her to sit and learn from the Texas middles, including one of the school’s best ever at the position in Chiaka Ogbogu.

While that likely helped her development, it also provided a big shadow to emerge from. Ogbogu left Austin as the Longhorn’s career leader in blocks and was a four-time AVCA All-American – with three selections to the first team.

The youngster from Kendleton, Texas though has not been fazed by the big expectations, and has filled the shoes of what the team lost from Ogbogu so far in 2018.

Obviously note that it’s not just all about stats. Plenty of what middles do is influence where the attack goes and also get touches or alter shots to slow things down for their back row. It’s also been just non-conference action plus the team’s Big 12 opening win at #23 Kansas State, so there’s plenty of season left against high-level competition for numbers to fluctuate.

All that said, Butler has been right in line statistically with what Ogbogu provided for the Longhorns over four years. And Butler has actually put up better numbers so far than what Ogbogu did in her freshman campaign.

Here’s what Ogbogu did in her freshman season at Texas when she was AVCA All-America Second Team in 2013 and All-Big 12.

Additionally, below are her career numbers.

Now, keep those in mind and take a look at what Butler has posted so far in her freshman season to begin 2018.

So basically she is right in line with Ogbogu’s career numbers, just dipping a bit in blocks per set. But compared to what Ogbogu did as a freshman, Butler is currently exceeding the statistics of what became a second-team All-American that season.

The Longhorns will look for Butler to continue growing at the position and playing at high-level as they once again have aspirations to win the Big 12 and make noise in the NCAA Tournament.

They’re currently ranked 6th in the latest VolleyMob Top 25 Power Rankings and 6-3 (1-0, Big 12) following a win at #23 Kansas State in which Butler had 14 kills and 7 blocks. Their next match comes against Baylor at home on Wednesday, September 26.