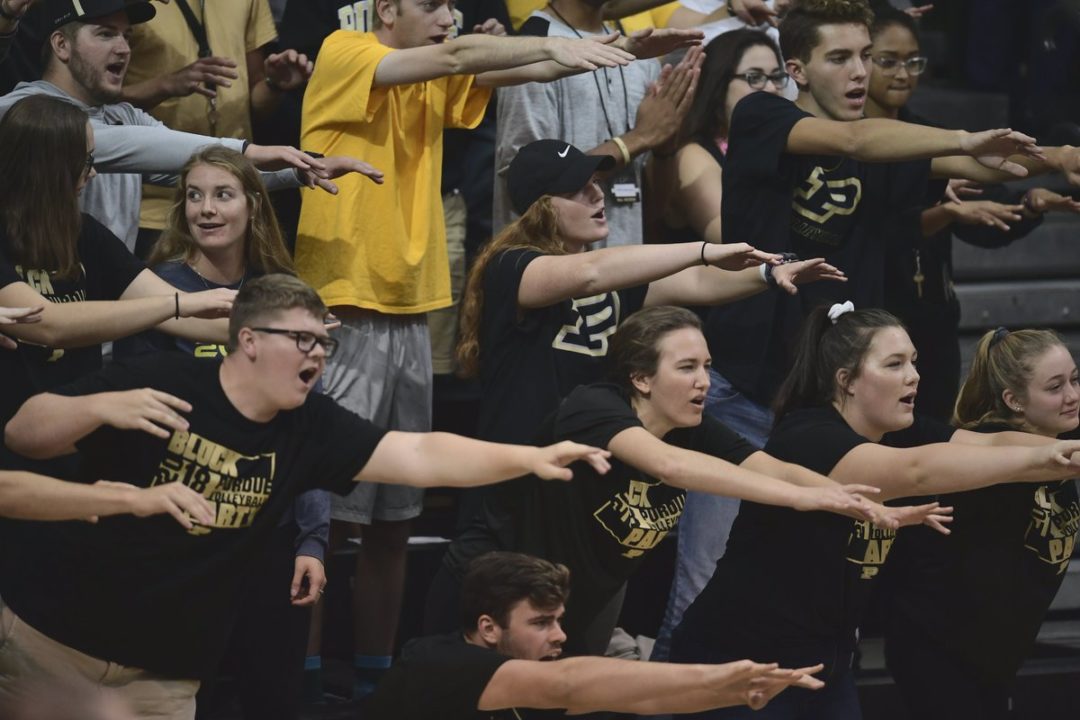 Friday's match between Purdue and Illinois is not just a battle of two unbeatens and two Top 25 teams, it is a clash of two of the nation's best student sections - The Boiler Block and Spike Squad and the latest matchup in a series of close contests. Current Photo via Purdue Athletics

A sold-out crowd will be on hand for Friday night’s matchup between two of the nation’s five remaining undefeated teams: No. 4 Illinois (AVCA 8) and No. 20 Purdue (AVCA 16), both 11-0.

That much would be expected from an outsider, given the rankings and records. But for these two Big Ten and regional rivals, it is par for the course.

This is not just a battle of two unbeatens, it is a clash of two of the nation’s best student sections – The Boiler Block and Spike Squad. It is just the latest matchup in a series of close contests, many decided in five sets.

In fact, the last three matches had been decided in five setters with Purdue winning two of them, before the Boilermakers pulled off a surprise sweep in Champaign in the lone 2017 meeting (Oct. 6).

“It’s a great rivalry, spirited by the two best student cheer sections in our league,” Purdue head coach Dave Shondell said. “The two schools are only 100 minutes apart and have been very competitive nationally in the past dozen seasons. From Don Hardin, Kevin Hambly, and now Chris Tamas; I have respected and enjoyed the coaches of the Illini.

“All the matches seem to be toss-ups with the home team often owning a slight advantage, however, the experience and physical attributes of this Illini squad give them an advantage.”

Both the Boiler Block and the Spike Squad take road trips to the other school periodically for matches and it gets loud.

Here’s a look at the Block Party in action.

The Box will rock tomorrow night. Our young & fearless @PurdueVB squad will battle a veteran Illini team ranked #8 in the land. Holloway has been sold-out for days. Illinois will bring their vocal supporters. Two unbeaten teams square-off in @B1GVolleyball opener. #WEAREPURDUE pic.twitter.com/s6cpiTqspj

This will be Illinois coach Chris Tamas‘ first experience with the rivalry on the road and first introduction to the Block Party and the Boiler Box Band, Purdue’s more than 75 piece volleyball-only pep band.

“I think it is one of those great Big Ten matchups,” Tamas said. “The two student sections are great and from what I heard it is a sellout crowd. It is the type of environment that we practice for and we want and we are happy to be a part of it.”

In Shondell’s tenure at Purdue (since 2003), the teams have played 10 five-setters in 28 meetings. In that span, the Boilermakers boast a 15-13 advantage, including eight of the last 11, but Illinois won six straight from 2007-10.

A Look at Purdue

A Look at Illinois

Shondell’s Keys to the Game

“The serve-pass game will be supreme as both teams are ranked toward the top of Big Ten serving stats with Illinois first in aces. If the Illini can pass serve and run offense with their roster of 6-foot-2 to 6-foot-4 bombers, we will have our hands full. Purdue will need to execute on offense against one of the nation’s best blocking teams. Matchups will be paramount in this contest.”

Tamas’ Keys to the Game

“Both teams have had great preseasons, undefeated and ranked. I think it is just going to be a good Big Ten matchup. I think the first match is always is like it is your first match of the year, in the Big Ten you get that environment. You just hope that you can keep your nerves calm and be able to play a steady game.

“I think with the experienced group that we have, maybe we will try to use that to our advantage a little bit. Not that Purdue is not, but we are a little more experienced at some of the positions, like Purdue was last year.

“I think we are just kind of looking to come out and be steady and make sure we are taking care of business on our side of the net and we expect Purdue to as well. We are just looking for a battle. Once you are in the Big Ten it is kind of a heavyweight fight, you go pound for pound, blow for blow and we are looking forward to it.”