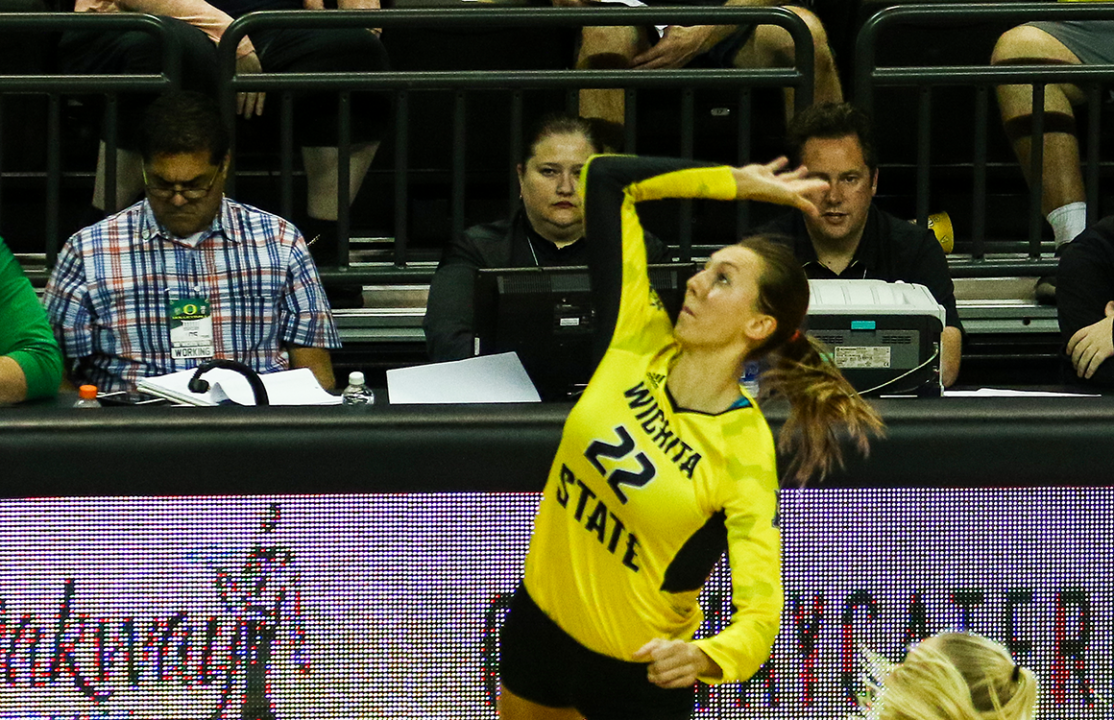 The American Athletic Conference has announced the winners of the league’s regular season volleyball honors for the 2017 season, which were voted on by the league’s 12 head coaches. Current Photo via the AAC

Press Release courtesy of the AAC

The American Athletic Conference has announced the winners of the league’s regular season volleyball honors for the 2017 season, which were voted on by the league’s 12 head coaches.

In its inaugural season with the conference, Wichita State20  brought home four of the league’s major awards. Abbie Lehman was voted Player of the Year, while Emily Hiebert earned the Setter of the Year honor by a unanimous selection. Wichita State Head coach Chris Lamb was named Coach of the Year, as the Shockers captured this year’s Team Academic Excellence Award after averaging the league’s highest cumulative grade-point average. Tulsa’s Taylor Horsfall was crowned the Libero of the Year, and ECU’s Shelby Martin was voted Freshman of the Year.

Lehman was a five-time Player of the Week honoree, as she helped Wichita State become the second American Athletic Conference team to go undefeated in league play and win the conference title with a 20-0 record. The senior middle blocker fueled The American’s most elite offense, setting a conference record .541 hitting percentage and averaging a conference-best 5.09 points per set. She was also the conference’s top blocker with 101 stuffs and 1.55 blocks per set. Lehman hit over .500 nine times this year and reached double-figure kills in 18 conference matches, averaging 4.20 kills per set.

A two-time Offensive Player of the Week selection, Hiebert paced the Shockers’ offense to setting a conference record .338 hitting percentage through a 20-match winning streak—the longest in league history. The Newton, Kan. native averaged a league-high 12.11 assists per set and had the most kills by any setter in conference action with 103. She also maintained a .424 hitting percentage and put down 58 blocks, while recording 10 double-doubles on the year.

Horsfall reached new heights this season in the Golden Hurricane’s back row, setting a conference record with 755 digs, which rank No. 2 in the nation. She also averaged 6.04 digs per set throughout the season, which are sixth in the nation. Horsfall, a three-time Defensive Player of the Week selection, helped her team to owning one of the top defenses in The American, ranking first in digs (1,504) and digs per set (19.28) for the second straight season. The Golden Hurricane also held its league opponents to averaging the third-lowest hitting percentage in the conference (.180).

Martin helped ECU, which was chosen to finish 11th in the league’s Preseason Coaches’ Poll, to taking the fourth place spot this year. The freshman setter had eight double-doubles and ended the season with the fourth-most assists among all setters in conference action (767). She guided her team to registering the second-most kills in the league (1,019) and recording the fourth-best hitting percentage. The Pirates enjoyed their first winning season since 2006, most wins since 1982 and most American wins in program history this year.

In his 18th year at the helm of Wichita State (28-3, 20-0), Lamb and his staff led the Shockers to their first American Athletic Conference title and 11th NCAA Tournament appearance. The team earned the No. 16 seed in the national tournament to host for the first time in program history. He guided Wichita State to its third undefeated conference season and second-most wins. The Shockers ended their regular season winning-out 29 consecutive sets and 20 straight matches, which are both the longest streaks in conference history.

Libero of the Year
Taylor Horsfall, L, So., Tulsa