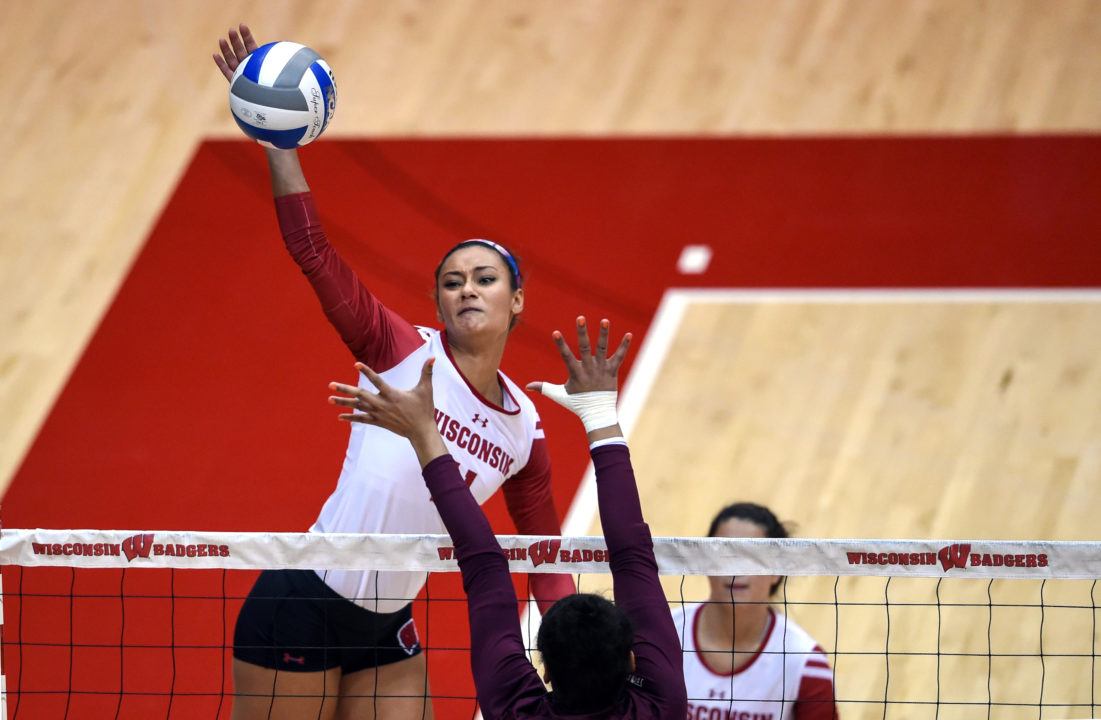 The sixth-ranked Wisconsin Badgers took the first match of the HotelRed Invitational in a sweep over Lipscomb. Current Photo via Wisconsin Athletics

The sixth-ranked Wisconsin Badgers took the first match of the HotelRed Invitational in a sweep over Lipscomb.

The first set started off on a 3-0 run for the Badgers off a Lipscomb error and two Dana Rettke kills. Wisconsin continues to grow their lead to 14-5. Lipscomb made a small 4-1 run to lessen the gap but the Badgers put their foot on the gas and continued chipping away until they won on a Madison Duello kill at 15-19.

The second set started off a little close their the first, but Wisconsin maintained a two or three point lead throughout the beginning. The Badgers then went on an 8-1 run to make the score 15-8. Lipscomb tried to recover but the initial lead was too much as they dropped the second set 25-19.

In the third set, it looked like a runaway Wisconsin set as they led 17-12 late but Lipscomb forged their way back to tie things up at 21-21. The score would be tied three more times before two Lipscomb errors concluded the set and match 26-24.

The Badgers dominated on defense from at the net with 16-6 in blocks.

A career night for @Tionna_q gives the #Badgers their sixth sweep of the season‼️ pic.twitter.com/RdDtctILpZ

Rettke led Wisconsin with 13 kills while Tionna Williams added another 10 and 11 blocks for a double-double. Duello added another six blocks and setter Sydney Hilley put down five blocks on top of her 38 assists From the back row, Kelli Bates picked up a match-best 13 digs while Amber MacDonald and ME Dodge each added another 10 apiece.

For Lipscomb, Carlyle Nusbaum put down a match-best 17 kills and 10 digs for a double-double.

It was a defensive battle in the UW Field House Thursday night as the sixth-ranked Wisconsin volleyball team swept Lipscomb, 25-19, 25-19, 26-24, in the first match of the HotelRED Invitational.

Leading the charge for the Badgers (6-0) was junior middle-blocker Tionna Williams, who recorded her first career double-double with a career-high 11 blocks while adding 10 kills. Her 11 blocks is also a Badger record under rally scoring. Fellow middle blocker Dana Rettkehit a match-high .571 (13 kills – 1 error – 21 attempts).

UW also had three players record 10 or more digs to hold a 46-43 advantage. Senior Kelli Bates had a match-high 13 digs while M.E. Dodge and Amber MacDonald each recorded 10 saves.

“I really like that team we just played. They come at you hard. I think defensively they are really, really good, they’re balanced. (Carlyle) Nusbaum had 10 kills in the third (set), and that was a lot to handle tonight. (They had) really good serves. Our team was really having to fight in serve receive.

“I thought we were hitting really well, but they held us down to a pretty low percentage—their backcourt was just fantastic. I don’t know how many bombs that Grace Loberg put on them, and these guys are just picking up like they’ve got no issues at all.

“I thought that our side, we came out very, very well defensively. I thought that we had a defensive mindset to start out, and we just battled. (It was a ) good win against a team that shows an awful lot of fight.”

“They had a little bit of a size advantage (Tionna and Dana). And I think early on, they were kind of bunched—paying a lot of attention to these two guys. (We) stretched out their block a little bit, going elsewhere and then really kind of went to them a lot late.

The HotelRED Invitational continues tomorrow with Lipscomb taking on Texas A&M at 6 p.m. Admission to that match is free. The Badgers face Texas A&M in the final match of the tournament on Saturday at 7 p.m.

Playing in front of 5,500 raucous spectators at the UW Field House, the Lipscomb volleyball ball team gave No. 6 Wisconsin one of its toughest tests of the season, but in the end it was the homestanding Badgers who came away with the victory, 25-19, 25-19, 26-24.

“As we go through some of these more challenging matches, we are learning more and more about us and what it takes to win,” Lipscomb head coach Brandon Rosenthal said. “It’s tough because on one side of things you want it to happen as quickly as possible, but we have to go through it and learn from it.

“I thought we played hard tonight, but we have to get back to what we can control, and our effort and attitude are the things I would like to focus on moving forward. We will get better from this experience.”

The Bisons (4-2) were led by junior outside hitter Carlyle Nusbaum, who picked up her third double-double of the season behind a match-high 17 kills and 10 digs. Sophomore middle blocker Maddie Phillips added seven kills.

Morgan Elmore led the Bisons with 18 assists, while Marcella Emmanuelli chipped in 14.

Lipscomb played its best set of the match in the third, even working its way to a set point at 24-23, but Wisconsin (6-0) rallied to win the final three points and the match.

“I liked what we did in set three to really come back,” Rosenthal said. “Defensively I thought we did a really nice job and were able to add some pressure. We made a few good blocks and dug a lot of balls.

“But when you give up that many points on unforced errors, it makes it tough to win and even tougher when it’s against the sixth-ranked team in the country.”

Lipscomb takes on Texas A&M Friday at 6 p.m. It will be the last match of the weekend for the Bisons and the first for the Aggies.

“Tomorrow we face another great opponent with some different challenges, but more than anything we have to look at our challenges on our side of the net and how do we have a short memory of tonight in the idea that even though we didn’t play our best, we were right there,” Rosenthal said.

“We are going to win and lose matches, but we need to do it our way. Let’s not come back in the locker room and say we would like this opportunity again. Let’s expend all energy to feel satisfied at the end of the match. Now we may not get the result, but we can surely control the effort. Don’t get me wrong, we played hard tonight, but I felt we had some left in the tank. I want to exhaust all of that.”