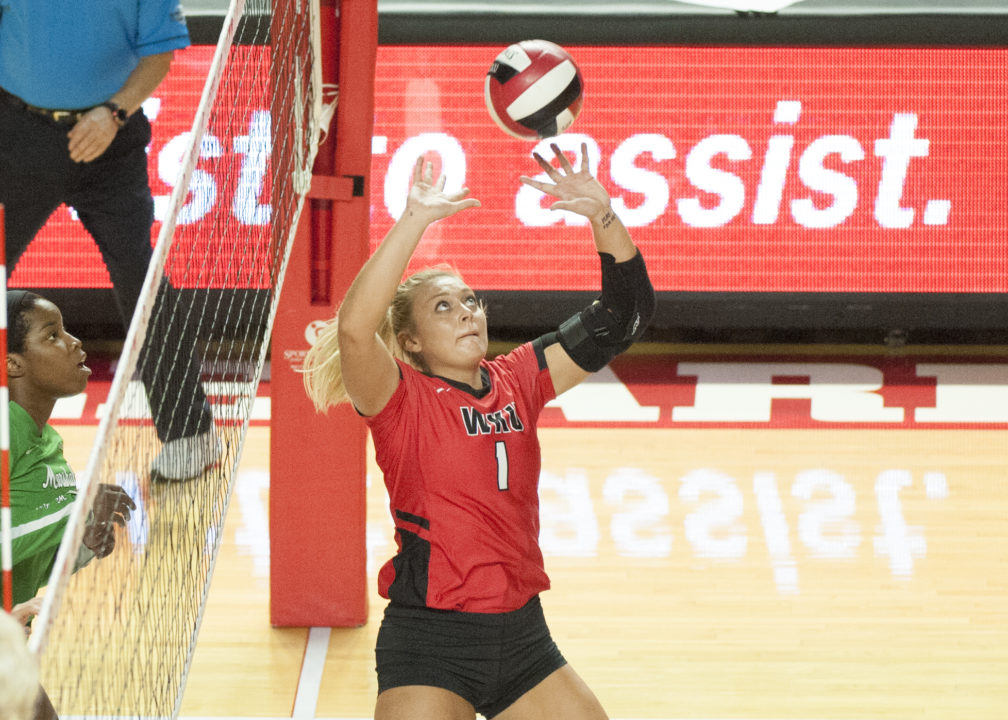 Alyssa Cavanaugh and Jessica Lucas have repeated as Conference USA’s Player of the Year and Setter of the Year, respectively, the league office announced Thursday. Current Photo via Steve Roberts/WKU Athletics

Alyssa Cavanaugh and Jessica Lucas have repeated as Conference USA’s Player of the Year and Setter of the Year, respectively, the league office announced Thursday. Cavanaugh has collected the league’s top player title for her junior and season campaigns. Lucas has now owned claim to the conference’s top setter award three-consecutive seasons.

Cavanaugh and Lucas join Conference USA’s most elite as repeat winners of superlative awards. Lucas is the first setter to ever win three Setter of the Year accolades in the league’s 23 years of distribution. Across all awards, Lucas is now just the fifth player to ever win three individual superlative awards during their career. Cavanaugh is just the fifth player in conference history to win multiple Player of the Year nods. During the history of the Conference USA superlative awards, only 16 student-athletes have claimed multiple awards including Cavanaugh and Lucas.

Making her case for back-to-back Conference USA Player of the Year honors, Cavanaugh leads all outside hitters in the nation with a scorching .381 hitting percentage. Racking up 408 kills on the 2017 campaign to date, Cavanaugh leads the league with an average of 4.04 kills per set. The Louisville, Ky., native collected three of the league’s Offensive Player of the Week laurels during the regular season after being tabbed the Preseason Player of the Year as well. Cavanaugh was one of 30 candidates announced for the Senior CLASS Award in early October.

Facilitating the second-best offense across the country for back-to-back seasons is Lucas. Helping WKU Volleyball to a collective .341 hitting rate on the year, Lucas is dishing out an average of 10.99 assists per set. After claiming her sixth C-USA Setter of the Week nod on Nov. 6, Lucas owns the most weekly awards by any player in league history with 18 on her career. The Seymour, Ind., native was also named one of 30 candidates for the Senior CLASS Award and has since remained in the running as one of the 10 finalists. She has also earned a spot on the Conference USA Volleyball All-Academic Team for back-to-back seasons now.

Lucas and Cavanaugh have both been tabbed First-Team All-Conference selections by C-USA all four years of their career. The duo has also already collected three AVCA All-America honors each entering their senior seasons.