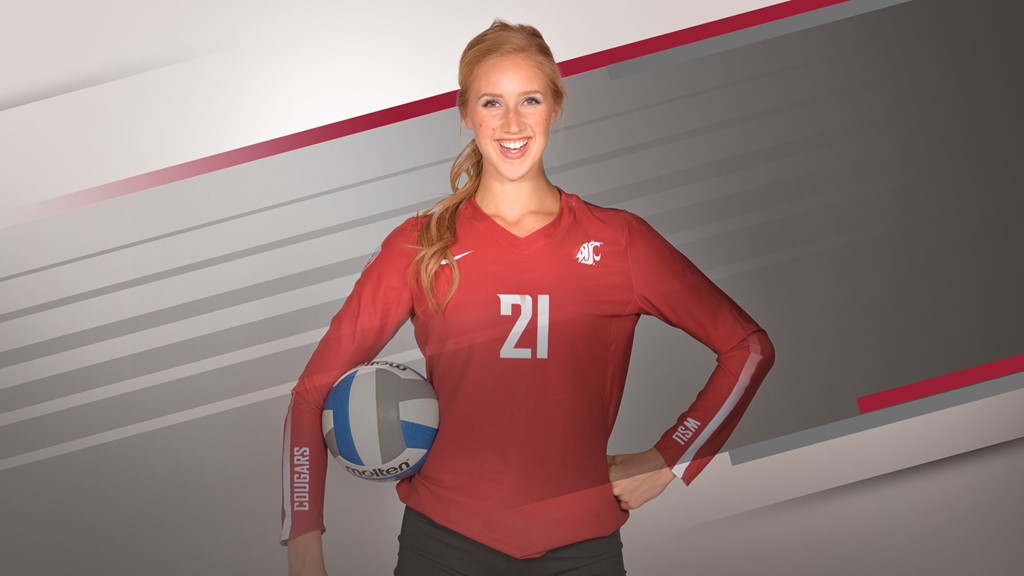 WASHINGTON STATE’s Casey Schoenlein was named the 2017 Pac-12 Women’s Volleyball Scholar-Athlete of the Year, the Conference office announced. The award, which is presented in each of the 24 sports the Pac-12 sponsors, was established to honor collegiate student-athletes that are standouts both academically and in their sports discipline.

A two-time co-captain, Casey Schoenlein has a 3.94 cumulative grade point average and is expected to graduate with a bachelor of arts degree in communication/journalism and media production in May 2018 while also helping the Cougs earn a NCAA Tournament bid for the second-straight year. She is a two-time Pac-12 first team All-Academic selection and a three-year WSU Athletics All-Academic team member. She leaves Pullman ranked in the top 25 in the WSU career records for block assists and total blocks. She was a 2016 honorable mention All-Pac-12 and also participated on the U.S. Collegiate National Team the last two summers as part of USA Volleyball’s High Performance pipeline, traveling to Europe and Croatia.

For the past two years, Schoenlein has provided written and video content for a bi-weekly blog about the WSU volleyball team on- and off-the-court activities published on the wsucougars.com website. She served on WSU’s SAAC from 2014-present and was elected Executive Communications Officer. She was selected to be the female representative from WSU Athletics at the 2017 Pac-12 SAAC Conference at the Pac-12 Conference headquarters in San Francisco, where she participated in discussions about NCAA legislation and how to improve the voice of the student-athletes.

Through her academics, athletics, and volunteer work, Schoenlein has taken on leadership roles while demonstrating an impeccable work ethic, and fostering compassion in all she does. She is admired by her peers in the classroom, her fellow student-athletes, coaches and athletics staff. Schoenlein has volunteered as a referee the past three years at the annual Special Olympics Basketball tournament of 600 Special Olympians. She has been very active in the WSU SAAC sponsored activities and has participated in WSU’s National Women and Girls in Sports Day celebrations. She has served for two years as a Peer Academic Counselor, meeting with younger student-athletes weekly to ensure their commitment to their athletic and academic responsibilities.

In order to be eligible for the Pac-12 Scholar-Athlete of the Year award, student-athletes must be a senior (in athletics eligibility) on track to receive a degree, have a cumulative grade point average of 3.0 or higher, participate in at least 50% of the scheduled contests in the sport and have a minimum of one year in residence at the institution. Each Pac-12 institution may nominate one individual per sport, and the winners are selected by a committee of Pac-12 staff members at the conclusion of each sport’s regular season. The athletic accomplishments of the nominees are a consideration in the voting for the award.