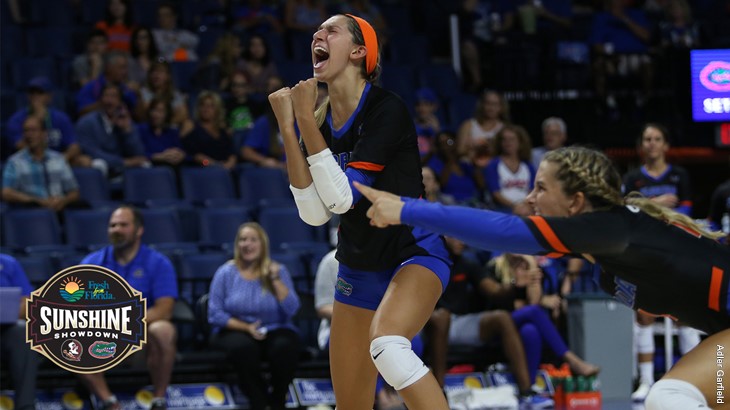 The VolleyMob #1 ranked Florida downs #22 Florida State in straight sets, holding their opponents to a low .106 hitting clip, the first time they have held a ranked opponent so low since against #19 Santa Clara 2007.  Current Photo via Florida Athletics

The VolleyMob #1 ranked Florida downs #22 Florida State in straight sets, holding their opponents to a low .106 hitting clip, the first time they have held a ranked opponent so low since against #19 Santa Clara 2007. The win also ties them with Northern Iowa with four wins over ranked opponents this season.

The first set was the only real contest for the Gators, as the Seminoles scored their match-best 21 points in the opening set. The Gators jumped out to a 10-4 lead, but Florida State pushed back to bring the score within two. From then on, Florida handled the remainder of the set, taking a nine-point lead at 24-15. However, the Seminoles held off six set points off four Florida errors and two Milica Kubura kills before Rhamat Alhassan put the set away at 25-21.

The second set started off a close battle with the score tied at 6-6 before the Gators took off on a 7-0 run to take a 13-6 lead. This was too much for the Seminoles to handle, as they dropped the set 25-15. The final set saw an 8-0 start for Florida – this being enough to secure a 25-12 win and the sweep.

Carli Snyder paced the Gators with 12 kills and 12 digs for a double-double while Alhassan and Rachael Kramer slammed down 10 apiece. Caroline Knop picked up a match-best 19 digs.

For the Seminoles, Kubura led the way with 13 kills while setter Brianne Burket dished out 25 assists and 14 digs for a double-double.

Aside from early stretches in the first and second sets, as well as a rocky ending to the opener, Florida was dominant in its sweep of No. 19 Florida State in Tuesday (Sep. 19) night’s Fresh from Florida Sunshine Showdown.

Prior to the match, Florida dazzled fans with 3D court projection through their parternship with Quince Imaging and creative assistance from Old Hat Creative.

The victory gave the Gators their fourth win over a ranked opponent, tying them with Northern Iowa for the national lead.

Florida’s offense continued its steady progression toward operating at the nation-leading level of efficiency it reached a year ago. The No. 3 Gators hit .317, their second-highest hitting percentage of the year, logging 48 kills and just 10 errors on 120 total attacks.

Even still, defense continues to be the driving force of this group. Florida held the Seminoles to a .106 hitting percentage, marking the first time since Sep. 1, 2007 against No. 19 Santa Clara the Gators held a ranked opponent under a .110 clip.

Senior outside hitter Carli Snyder led Florida’s attack with her fourth double-double of the season. The Macomb, Mich. native led all Gators with 12 kills and added 12 digs.

Florida seized control of the first set with a 10-4 run to reach set point. After enduring a rocky stretch in which they lost six straight points, Alhassan smashed a putback to end the frame.

NEXT UP
Florida opens Southeastern Conference play Sunday (Sep. 24) at Arkansas. First serve in Fayetteville, Ark. is set for 2 p.m. ET. No live stream or television broadcast will be available, but Tom Collett will have the radio call on ESPN Gainesville 98.1 FM / 850 AM.

The No. 19 Florida State volleyball team fell to the No. 3 Florida Gators in three sets on the road on Tuesday (Sept. 19) night at the Fresh From Florida Sunshine Showdown.

his marks the Seminoles’ fifth loss to the Gators in the last nine matches of the series.

Florida took an early lead in the first set, holding the Noles to under .200 hitting and earning an early 10-4 lead. From there, the Seminoles’ offense kicked in, with senior outside hitter Natasha Calkins knocking down consecutive kills to slow the Gators’ roll. Florida State’s front line put pressure on the Gators and let UF make the errors up until UF’s set point, where the Gators led 24-15. From there, the Noles earned six consecutive points before a kill gave the Gators the set 25-21.

In the second set, the Florida State defense kept the Noles in the match, but Florida’s offense still proved to be too much for them. The match stayed tied through the first six points, but Florida went on an 8-0 run to gain a lead that the Seminoles could not make up. While the Seminoles tallied 13 digs in the set, the Gators hit .375 with 14 kills to stay ahead and take the set 25-15.

The third set proved to be the toughest for the Seminoles, as the Florida held it scoreless through the first eight points. The Gator offense seemed to click in the final set, with the team earning 18 kills on 36 total attacks (.389), while the defense slowed the Seminoles with three team blocks and 16 digs. Florida kept its lead through the set and eventually prevailed, taking the final set 25-12.

This marks the last non-conference match for the Seminoles this season as it opens ACC play this weekend, hosting Virginia on Friday (Sept. 22) and Virginia Tech (Sept. 24) at Tully Gym.

On facing a tough rival like UF…
“Well, we’ve got fourteen players; seven of them facing the Gators for the first time. So, I think there were mixed emotions. There were some that played very scared, there were some that were confident, that they were trying to bring along the others. You know, we are a team that lost a lot from last year. And we know that. We lost three players that were All-Americans. Two of them were senior middles, and we replaced that with true freshmen middles. They’re doing great, they’re working hard, they’re getting better. But that’s still a big transition to go to this level. And even bigger. You can start playing individual one on one volleyball is one thing, playing top-25 is one thing, playing top-5 volleyball is a whole different thing. And I think they got to see and experience what it was like to play against a top-5 program.

“And that’s what we talked about after the match. That we haven’t seen that yet, and for many of the players, they’ve never experienced it at all in their whole lives. So this was an eye opener for them to understand what it is we’re trying to teach them every day in practice; what we’re trying to get them to do. Because we’re trying to make them better, and now they’ve seen what it looks like on the court, across the net and hopefully we can go back and we can get them to listen. We can get them to really do the things we’re asking them to do.”

On what they learned from the loss…
“I always think in defeat that you can learn something. There’s no doubt. And there’s been many times that we’ve lost to a good team early in the year and we’ve been able to play much better at the end of the year. So I feel like that our program has a lot of growth, a lot of room to grow throughout the season because we’ve got so many players we’re trying to fit in right now. I feel like that we definitely are a better team than what we show but I also think Florida played great. They’ve got a great team, they’ve got a lot returning from last year, they’ve got a lot of top recruits, and they do a great job every time that we play. So we expected a battle. We knew it’d be a battle, we knew early season.

“You know, but we’ve still got so many things we’re trying to do. We’re still trying to get all of our players to play the same defense at the same time. We’re trying to get our offense down smoother with some of the newcomers. So there’s a lot of things that we’re not in sync the way we wanna be, but this will be used as a lesson for us to go back.”

On playing a rival like Florida…
“We were very excited to play them, but I’m honestly very disappointed. I think we could have played much better. We played timid. I think this gym is a little intimidating for us, because we don’t have a chance to play a lot in big gyms like this. They had a big home crowd and they’re a very intimidating team, so I think it took us a long time at the beginning of each set to actually get into playing and start playing on our level and that cost us.”

On what they’ll take away from the loss…
“Well, this is just the preseason, so we’re probably going to see them in the postseason again. And this is something we can learn from, and see where our weaknesses are and work on some stuff. I think that we can take this in a positive way although it’s a very disappointing loss.”