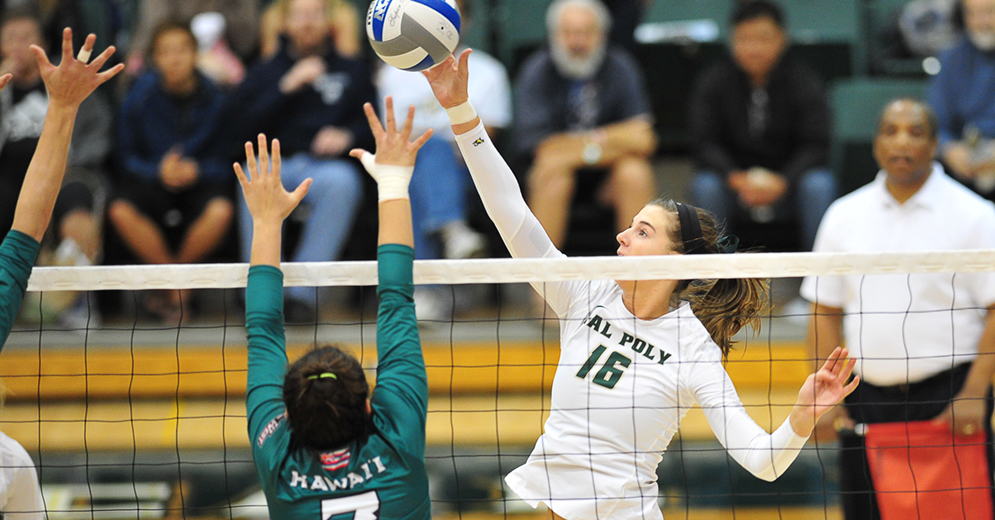 The Cal Poly Mustangs (RV) opened Big West conference play with a straight-set victory over the UC-Davis Aggies. Senior outside Raeann Greisen had a huge night for the Mustangs, notching a season-high 13 kills and hitting at an .867 clip.

For the Aggies, freshman outside Mahalia White and junior outside Brianna Karsseboom each had seven kills and sophomore outside Lauren Matias notched six.

In the first set, the Mustangs recorded four aces as part of a 10-1 run that flipped a two-point deficit into a 15-8 lead. They went on to take the frame by a 25-20 final score.

Cal Poly followed up its first-set success by registering 16 kills in set two on their way to a comfortable 25-12 win. Torrey Van Winden had eight of her 10 kills in the second and the Mustangs hit .500 as a team. UC Davis fell behind early in the third and never got closer than 12-11 as the Mustangs cruised to a straight-set victory to kick off Big West conference play.

The Aggies travels to Hawaii for a Saturday night match against the Rainbow Wahine, while Cal Poly hosts UC Riverside

DAVIS, Calif — Seniors Raeann Greisen and Savannah Niemen each recorded season-high’s in kills to lead Cal Poly to a sweep of its Big West opener Tuesday against UC Davis (25-20, 25-12, 25-19)

The Mustangs were strong behind the service line; recording five aces in the first set alone and finished with nine sets for the match.

Tied at four in the third set, Cal Poly would go on a 7-1 run. UC Davis would answer with a 6-1 run of their own to close it to 12-11. Another Mustang run would stretch the lead to 17-12 and it would never get closer as Greisen’s 13th kill ended the set and the match.

Senior setter Taylor Nelson finished with 41 assists to go along with a team-high four service aces. Sophomore outside hitter Jessica McRoskey led the Mustangs in digs with 14.

With the win, the Mustangs have now won six matches in a row.

Cal Poly will next be in action this weekend at home for two matches. They will face Cal State Fullerton in the home opener Friday at Mott Athletics Center at 7 p.m. The first 250 fans will receive volleyball schedule posters.

They will then play UC Riverside Saturday at 4:30 p.m. That will be the first “Double-Up Saturday,” meaning fans that show their ticket to the football game later that night will get free admission to the match.

The Aggies move to 8-6 for the year and 0-1 in conference play. The Mustangs, among the teams receiving votes in this week’s AVCA Top 25, improve to 11-2 overall and open 1-0 in Big West action.

Oddly, UC Davis hit .236 for the match, its highest efficiency rate since its home tournament loss to Portland State on September 8. Most of that came from the first and third sets, in which the Aggies committed only seven hitting errors and mounted significant comeback runs.

“We got aggressive, and attacked high and hard,” said head coach Dan Conners. “Our passing was sporadic but when we had streaks of good passing, I thought we improved the way we played. But defensively, the effort was not where it needed to be. That’s on me. I’ve got to prep them better than that.”

The Aggies hit a solid .324 in the opening set but suffered in the serve-receive department, surrendering four aces amidst a 10-1 run that turned an early 7-5 UC Davis lead into a 15-8 Mustang advantage. Then in the second set, the Aggies managed just six kills to Cal Poly’s 16, as the guests pulled away to the 13-point win and a 2-0 match lead. Torrey Van Winden hit an errorless 8-for-9 in that second set.

UC Davis fell into an early 9-4 hole in the third set but managed to battle back to a 12-11 deficit. Karsseboom teamed up with Ohiri and Matias, then delivered back-to-back kills as part of that comeback.

Ultimately, Cal Poly never relinquished its lead in that final period, later scoring four straight to reclaim a four-point edge at 17-13. Nieman and Greisen each had two kills down the final stretch to pull away from a 21-18 margin and complete the Mustang sweep.

The Aggies return to action at Hawai’i on Saturday night. Match time is 9 p.m. Pacific.