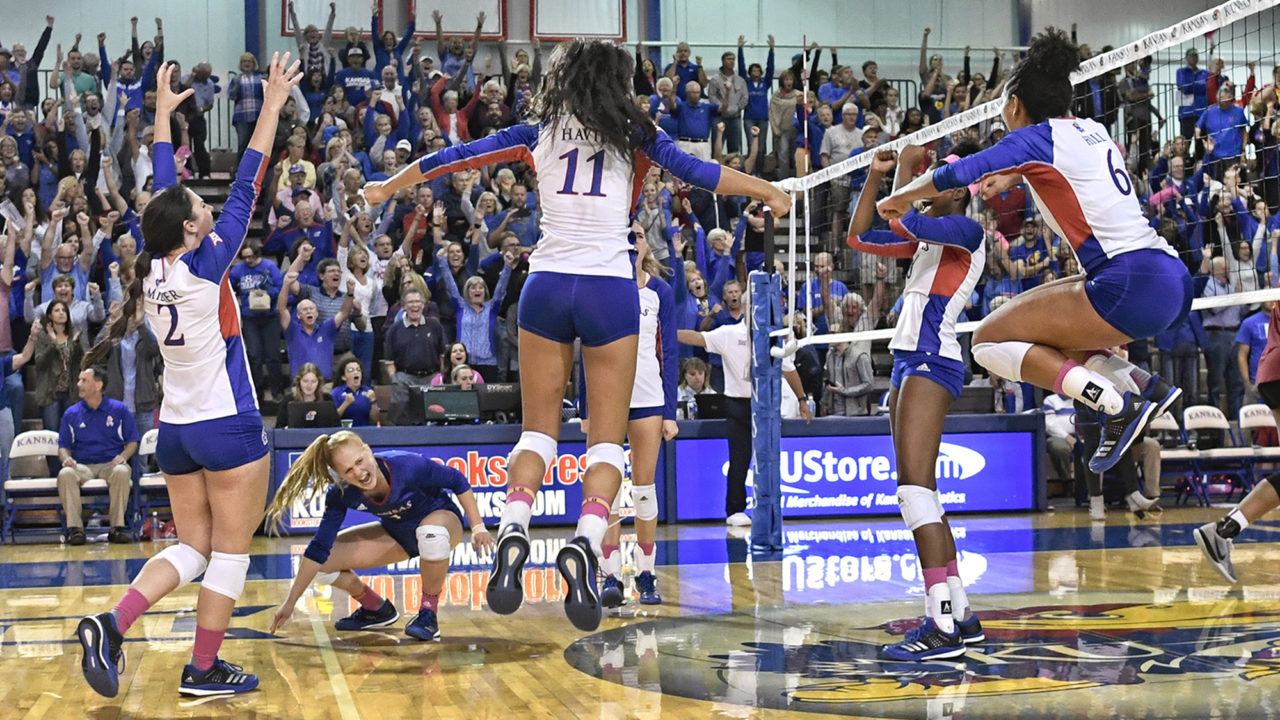 Kansas started off slow in their four-set win over Kansas State with three players recording double-digit kills in the Jayhawks seventh straight Dillions Sunflower Showdown series. On the K-State side of things, Kylee Zumach posted her 1,000th career kill in the loss as she recorded 15 kills.

The detriment for the Wildcats were their errors throughout the match as they posted 21 hitting errors – so did Kansas – but they recorded 14 to six serving errors but eight aces. The 21 hitting errors on each team hurt their overall performances with both teams hitting below .200 in the match.

The first set was a slow start for Kansas as they fell by a large margin of 11 points 14-25. Despite the sluggish start in the match, they quickly recovered to take down K-State in the next three.

Kansas is still without All-American outside hitter, Madison Rigdon, whose status for return is day-to-day. Despite Rigdon still being out, head coach Ray Bechard sees the loss of one of their star players as the perfect opportunity to gain some experience.

“Eventually, Rigdon will be back. When She does return, you can’t trade this experience our team is getting because you never know when down the stretch when it is going to be really valuable,” said Bechard.

Kelsie Payne led the Jayhawks with 14 kills in the win along with seven digs and four block assists while Zoe Hill added in another 11 kills on a .529 hitting clip with five blocks. Jada Burse contributed 10 kills and two blocks. Setter Ainise Havili recorded a double-double of 37 assists and 21 digs while Allie Nelson picked up another 18 digs.

The 11th-ranked Jayhawks (21-4, 10-2 Big 12) recovered from a slow start in the first set, which produced only six KU kills, to finish the match with a .317 hitting percentage in the third and fourth sets combined to clinch the victory.

Senior All-American right-side hitter Kelsie Payneled KU with 14 kills, but her defense came through in the clutch at the end of the match. Payne combined with middle blockers Zoe Hill and Taylor Alexander on respective plays to register back-to-back blocks which gave KU match point, 24-22, and to win match point, 25-22, in the fourth set.

In addition to five blocks, Hill turned in an efficient 11 kills on a .529 hitting percentage to help helped turn the offensive tide in favor of the Jayhawks after the slow start in the first set. Senior All-American setter Ainise Havili notched her 20th double-double of the season with 37 assists and a match-high 21 digs while captaining KU’s offense and helping fortify the Kansas passing effort, along with libero Allie Nelson‘s 18 digs.

K-State falls to 9-16 and 2-10 in conference play after three-straight appearances in the NCAA Tournament. The Wildcats were led by 15 kills by Kylee Zumach and 20 digs by Reilly Killeen.

“It was a perplexing start, but then we decided that every contact in every rally is going to be important,” Kansas head coach Ray Bechard said. “Offensively, Zoe gave us a boost towards the end of the match, which was huge. Taylor gave us a boost defensively. K-State’s record doesn’t represent how well they have been playing.”

The first set started off with the momentum on K-State’s side and remained there until a 25-14 first-set decision in favor of the Wildcats. KSU began the match by going on a 7-2 run and led Kansas for the entirety of the opening set, holding KU to a flat .000 hitting percentage.

In the second set, Kansas State continued to build momentum as KU fell behind to an early 8-3 deficit. A huge ace by KU’s Alexander made the score 8-5 and marked the beginning of a KU comeback. Payne registered a kill to bring KU within one, followed by a KSU ball handling error to tie the set at 12. The two teams alternated the lead eight times before sophomore outside hitter Ashley Smith sparked a 6-3 KU run to finish out the 25-21 second-set win for the Jayhawks.

Kansas took control of the third set halfway through. The Jayhawks went on a 5-0 run backed by the serving of Alexander. KU finished the third set on a 7-1 run, on their way to a 25-15 victory. Kansas racked up 17 kills on a.500 hitting percentage with an 80 percent side-out clip in the third set.

The Jayhawks came out strong in the fourth set and took an early 12-6 lead over the Wildcats. A slow K-State rally eventually saw the Wildcats take a 17-16 lead. Kansas broke an 18-18 tie following a pair of K-State attacking errors, giving KU a two-point scoring margin that would not be overcome.

Between Payne’s pair of match-clinching blocks which gave KU a 25-22 fourth-set victory, K-State senior Bryna Vogel hushed the sold-out crowd at Horejsi Family Athletics Center for minutes after going down with a gut-wrenching injury.

“Bryna has been an absolute stud for K-State the last four years,” Bechard said of Vogel, a 2016 All-Big 12 Second Team honoree. “She has given all she has to that program. I have been so proud of her effort the last four years. We hope she is OK.”

Kansas played its second match of the season without senior All-American outside hitter Madison Rigdon, whose status for return from injury is day-to-day. But Coach Bechard sees the silver lining that may benefit his team in the long run.

“This will make us a better team,” Bechard said of his squad taking on different roles during the absence of the six-rotation play of Rigdon. “Eventually, Rigdon will be back. When she does return, you can’t trade this experience our team is getting because you never know when down the stretch when it is going to be really valuable.”

UP NEXT
Kansas plays its eighth top-25 matchup of the season against No. 23 Baylor on Saturday (Noon, ESPN3).

“It’s just a really cool accomplishment,” said Zumach. “I’m really happy that I could do it with this group of girls. I’ve played with some really great volleyball players. I couldn’t have done it without my teammates and coaches, family, the K-State family and support staff. It’s a bittersweet night, but not a lot of people can say they did that.”

“She’s big time,” head coach Suzie Fritz said of Zumach. “In so many ways, not just her kill production but as a leader. Kylee has an infectious competitiveness to her. She competes so hard and loves to play so much and has a such a strong presence on our team. I’m really happy for her.”

Zumach, a redshirt junior from Buffalo, Minnesota, entered the night needing just five kills to reach the milestone and tallied her fifth kill early in the second set. Zumach ended the night with a team-high 15 kills – the 16th time she has paced the team in the category in 25 matches this season.

“I thought we competed hard,” said Fritz. “I thought, at times, we were playing good volleyball. I think we are still trying to become the team that we are capable of becoming and doing things consistently well.

“I thought we were the better serve and pass team early. Then late, when those things started breaking down, they [Kansas] got a lot better as the match went. Their quick hitters got a lot more involved and they started to manage their errors a lot better. The momentum for us shifted and changed a little bit late in the match.”

Though Zumach was the only Wildcat to reach double-figure kills, libero Reilly Killeen and opposite Bryna Vogelrecorded 20 and 18 digs, respectively, to lead the defense. Freshman Brynn Carlson, junior Macy Flowers and redshirt freshman Peyton Williams all added three blocks.

K-State limited KU to just six kills to go with six errors (.000) in the opening set. Zumach had a set-high four kills while Carlson added three to help the Cats hit .243 (14 kills, 5 errors, 37 total attacks). K-State led from start to finish in the frame, jumping out to a quick 7-2 lead and never looking back. Carlson picked up the first two aces of her Wildcat career in the set.

In Set 2, the Cats rushed out to an early 8-3 lead after an ace by setter Sarah Dixon, only to see the Jayhawks claw back and level the score at 12. After exchanging blows, the sides found themselves locked at 19 before KU finished the set on a 6-2 spurt to take the set 25-21. The back-and-forth set saw a total of nine tied scores and four lead changes. Flowers led the Wildcat offense with three kills in the set to go with a pair of blocks.

The match’s third set saw eight ties, as five straight points by the Jayhawks turned an 8-8 score into a 13-8 game. K-State crawled with two at 14-12, but KU closed the frame on an 11-3 run as it hit a match-best .500 in the set (17k-2e-30ta). Elle Sandbothe, Vogel and Zumach each tallied three kills in the set without an attacking error.

After falling behind early in Set 4, K-State used a 10-3 run midway through the frame to take a 17-16 lead. The teams traded points and the Cats trailed by one at 23-22 before back-to-back blocks by the Jayhawks closed out the match. Zumach recorded six of K-State’s 12 kills in the final set.

Dixon and fellow setter Brooke Smith handed out 23 and 19 assists, respectively. Vogel ended with eight kills and Flowers was the team’s efficiency leader at .294 (6k-1e-17ta).

K-State returns to Ahearn Field House as it will play host to TCU (10-14, 2-10 Big 12) Saturday at 7 p.m. The match with the Horned Frogs will stream live on ESPN3 and the WatchESPN app. Fans can also listen to Rob Voelker call the action live KMAN 1350 AM, 93.3 FM and on K-StateSports.com.