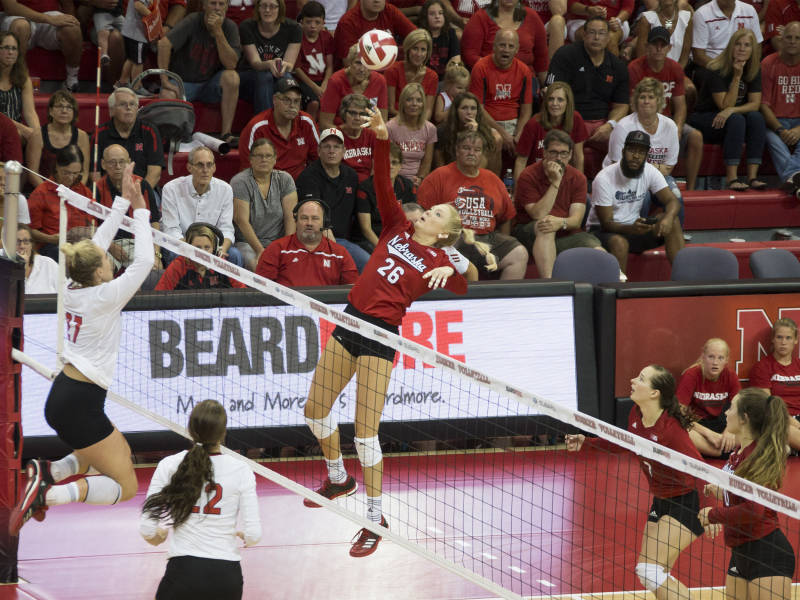 The #10 VolleyMob ranked Nebraska Huskers swept through the Minnesota Gophers to start off Big Ten Conference play with an undefeated 3-0 record. Current Photo via Nebraska Athletics/Huskers.com

The #10 VolleyMob ranked Nebraska Huskers swept through the Minnesota Gophers to start off Big Ten Conference play with an undefeated 3-0 record. This is the second top-five win for Nebraska since starting conference play after they swept Penn State on the road last week – and the first time the Nittany Lions were swept on their own court in nearly 15 years.

The two teams are very different in their starting lineups with Minnesota focusing more on a youthful start while the Huskers have a balanced veteran squad. The Gopher freshman starters were – Lauren Barnes, Stephanie Samedy and Regan Pittman while the Huskers started with just Lauren Stivrins as a freshman. No seniors started for Minnesota, aside from their libero, Dalianliz Rosado. Meanwhile, Nebraska started Kelly Hunter, Sydney Townsend, Briana Holman and Annika Albrecht.

The start of the first set was a back and forth challenge for each team with the score being tied up at 5-5. From there Nebraska took a small lead that they continued to expand on after a few Minnesota errors and Husker kills. Late in the set, the Huskers took an 18-12 lead over the Gophers before a 5-0 run by Minnesota brought the score to 18-17. A kill by Albrecht stopped the run followed by a Mikaela Foecke and Stivrins block over Molly Lohman. Samedy tried to keep the Gophers in the set but her efforts were not enough with the Huskers taking the first 25-21 after an Albrecht kill and Sydney Kleinman error.

After six straight ties to open up the second set, the Huskers took a small two-point lead at 8-6 off Hunter and Stivrins kills. A Lohman/Samantha Seliger-Swensen block of Albrecht and an Alexis Hart kill brought the set back to 8-8. Nebraska then went on a 3-0 run to take an 11-8 lead. This lead held steady until 16-11 as Jazz Sweet posted two straight kills but Jasmyn Martin ended the small run with a kill. Hayley Densberger pulled up a big dig for the Huskers to put them back on the scoring end of the run with an Albrecht kill and Minnesota attack error as the Huskers took a 19-12 lead. Blocks and strong slide attacks from Stivrins helped the Huskers pull away at the end to take the 2-0 match lead with a 25-18 second set score.

Now, both teams are hitting over .200 in the match with Minnesota improving their hitting clip to .205 while the Huskers moved up slightly to .284. In the set, Nebraska put down 14 kills and 14 digs while the Gophers slammed down 12 kills, 10 digs and four blocks.

Foecke went off to start the third set getting Nebraska’s first four points on kills. From there Stivrins helped at the net tremendously, stuffing down two blocks in a row to give the Huskers a 9-4 lead. The Gophers struggled to handle the slide attack from both Stivrins and Holman in the third set, with multiple kills along with Minnesota service errors brought the Huskers to a 17-8 lead late. The last set got away from the Gophers, they were able to rally back five more points up the Huskers blocked and out-played Minnesota for the sweep. Albrecht hit the ball off the Gopher block to end the match 25-13.

Following the match, Nebraska’s head coach John Cook mentioned the play from his middles and that they have been a constant and strong focus for the Huskers. By going to the middle it opens up the rest of the hitters on the net.

Four Huskers posted double-digit kills, Stivrins, Albrecht and Holman each contributed 11 kills apiece while Foecke added another 10. Both middles (Holman and Stivrins) posted .500 and .526 hitting percentages, respectively, while Stivrins added four blocks to her tally. Overall, Nebraska posted a .301 hitting percentage while holding the Gophers to .183. Foecke posted a double-double with her 10 kills and 11 digs while Hunter dished out 43 assists and 11 digs. Kenzie Maloney picked up a team-best 12 digs.

For Minnesota, Alexis Hart posted a match-best 13 kills while Seliger-Swensen dished out 26 assists and 11 digs for a double-double.

In between the second and third sets, former Husker Jordan Larson had her jersey retired. Larson is now a member of the U.S. Women’s National Team. She is one of five Huskers to post more than 1,000 kills and digs in her career finishing with 1,600 kills and 1,410 digs and a school record 186 aces. Larson’s jersey is the 11th to be retired for Nebraska’s volleyball program.