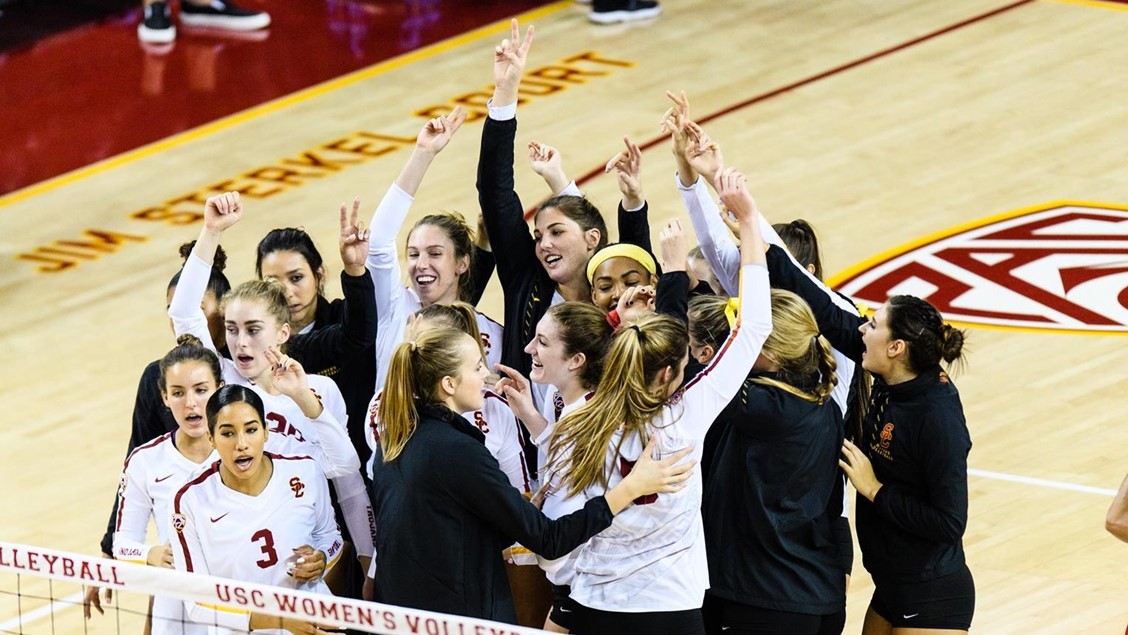 The victory, which was the Trojans’ fifth straight, gave Haley the milestone, including wins at Kellogg Community College (men and women) and 952 NCAA Division I wins with the women’s teams at Texas and USC.

After Colorado won two close sets and USC took two blowouts, the fifth set was a see-saw battle. The Trojans jumped ahead 6-4 early, only to trail 8-6 at the changeover. Two hitting errors and kill by junior outside hitter Alexa Smith and senior opposite Joslyn Hayes gave the Buffs the two-point edge. USC scored six of the next eight, including a pair of blocks and an by sophomore setter Cindy Marina, to surge ahead 12-10 and force a Colorado timeout. The Trojans finished off the comeback at 15-11 with a pair of kills by senior opposite Niki Withers and a Colorado service error.

USC led by three early in Set 1, last at 9-6, but could not hang in what turned into a back-and-forth affair featuring five ties and three lead changes. The Buffaloes turned the 9-6 deficit into a 14-10 lead of its own as the Trojans gave up four points on errors. USC charged back from a 15-11 deficit with a 5-0 run of its own, scoring two points on Colorado miscues and two on Botkin putaways. Later, trailing 18-17, the Buffs pulled away with eight of the final 10 points. Shebby notched two kills and a block, while Pfefferle added two stuffs and a kill in the run. The duo teamed up on a block to make it 24-18. Kills by Dunn and Lanier kept the set going, before Pfefferle ended it with a putdown.

After tying it at 5-all in Set 2, it was never in doubt for the Trojans, which soon built a 15-9 advantage. Three Colorado errors and two kills each by Abercrombie and Lanier put USC up six. The Buffs narrowed the gap to four at 15-11, but would get no closer. Two Lanier putaways and an ace by Marina made it 24-15 Trojans. A pair of USC errors slowed the team momentarily, before Withers evened the match at a set apiece with the 25-17 win.

Neither team led by more than three in a hotly contested Set 3, which included 13 ties, including seven at or after the 21-all mark. USC boasted a three-point lead at 10-7 after back to back Colorado errors and again at 14-11, 16-13 and 17-14. Two kills and a block by Shebby knotted the score at 18. Down 21-19, the Buffs got kills from Abu and DeLuzio to pull even at 21. Shebby added another kill and block to give Colorado a 23-22 edge and the first set point try at 24-23. After thwarting that try and another at 25-24, Botkin came through for the Trojans with a kill and an ace to put USC up 26-25. A hitting error gave USC another chance at 27-26, but a Smith kill and another by Abu set up the final point for Colorado, a hitting miscue, which clinched the 29-27 win.

USC rolled to a 25-11 victory in Set 4, jumping out to a quick 20-6 lead and never looking back. After a tie at 3, the Trojans were off and running, notching six straight points, including a trio of Lanier aces. USC added another 6-0 run, this time featuring three Abercrombie kills, to raise the advantage to 17-5. Three Lanier putaways and an ace by Marina lifted the Trojans to set point at 24-9. A Botkin kill capped the set at 25-11 to force the decisive fifth stanza.