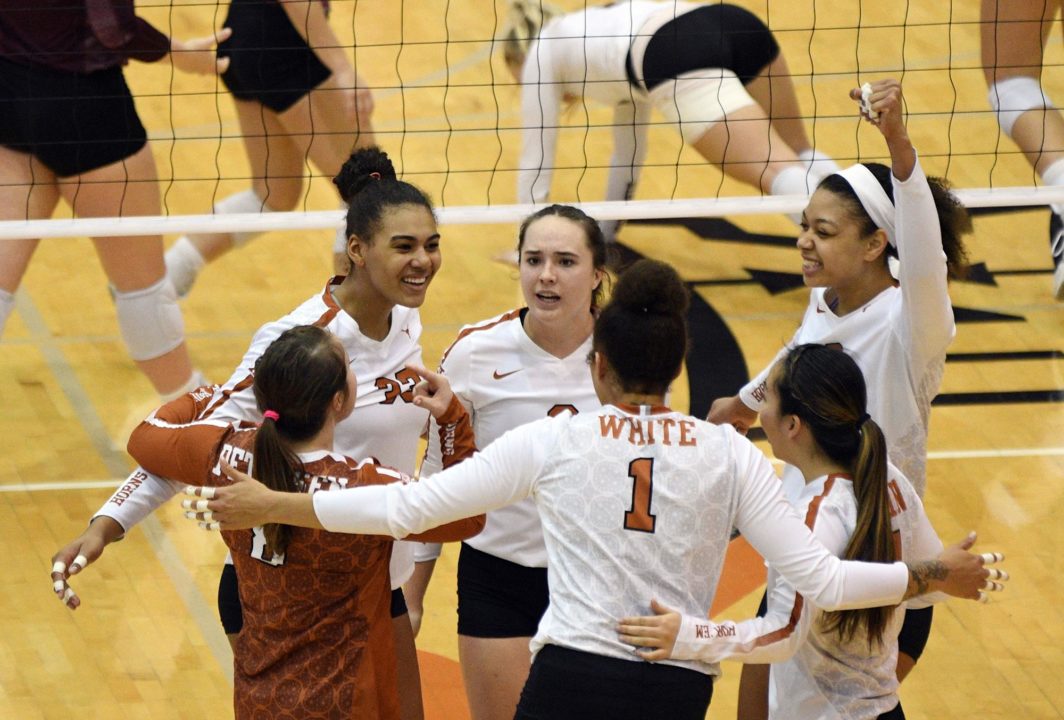 Point Texas for the Sweet 16 🤘 pic.twitter.com/VQcWsafhIY

Texas had five service aces. White had three aces while Gabriel added one each.

Texas will play the winner of No. 12 Pittsburgh v. Michigan in the NCAA Regional Semifinal. On the other side of the bracket, BYU will face Utah in the second round to determine hosting rights.

-The Longhorns have made 13-straight Sweet 16 appearances

-The Longhorns have hit .400 or better in four matches this season

-The Longhorns are currently on a 12-game win streak

-Texas has swept 13 opponents this season

-White had double-digit kills for the 24th time this season

-Eggleston’s .609 efficiency was a career high

-Petersen has double-digit digs in 20 matches this season

AUSTIN, Texas – The Texas State volleyball team’s historic 2018 season came to an abrupt end Friday night when the Bobcats dropped a 3-0 decision against No. 5-seeded Texas in a NCAA Second Round match at Gregory Gym.

“For me to say that we aren’t disappointed would be incorrect,” Texas State head coach Karen Chisum said. “We are disappointed but realistic.”

Texas State knew it was facing a tough challenge against Texas (22-4) since the two teams met earlier in the season.

The Longhorns jumped out to an early 6-1 lead and were leading 9-2 before the Bobcats mounted a small rally to close to 9-5. That was as close as Texas State could get in the first set as the Longhorns scored five of the next six points in the set. Texas was leading 18-9 when the Bobcats scored three straight points to pull to within 19-11. But, once again, Texas came right back to close out the set with a 5-1 run and win the opening period, 25-14.

“We knew that Texas is a good team, obviously, and we wanted to go out there and fight our hardest,” said senior Madison Daigle. “We were a little frazzled at the beginning, but we fought out on the court. It is difficult to lose the way we did because we didn’t play to our potential. But, we never gave up.”

The Longhorns took a commanding 21-7 lead in the third set, but Texas State refused to go away quietly as the Bobcats won seven of the next 10 points before Morgan Johnson‘s kill clinched the match for Texas, 25-14.

“When we trailed (21-7) in the third set, we got in the huddle after the game and told ourselves way to fight and not give up,” Daigle said. “It is a tough loss, but we know that we lost to a really good team. However, it is difficult in knowing that we could have performed a lot better and taken them to five games.”

The loss ends the season for Texas State (27-7), which won its first Sun Belt Conference regular season championship with a 15-1 league record and second Sun Belt Championship Tournament title. The Bobcats also had a historic victory a night earlier when they defeated Rice 3-1 for their first NCAA First Round victory in school history.

“I can’t take away anything this group of young ladies have done for Texas State this year and this program,” Chisum said. “We played hard all season long and they have earned everything they have got. Every season comes to an end with an L unless you are the national champion.”