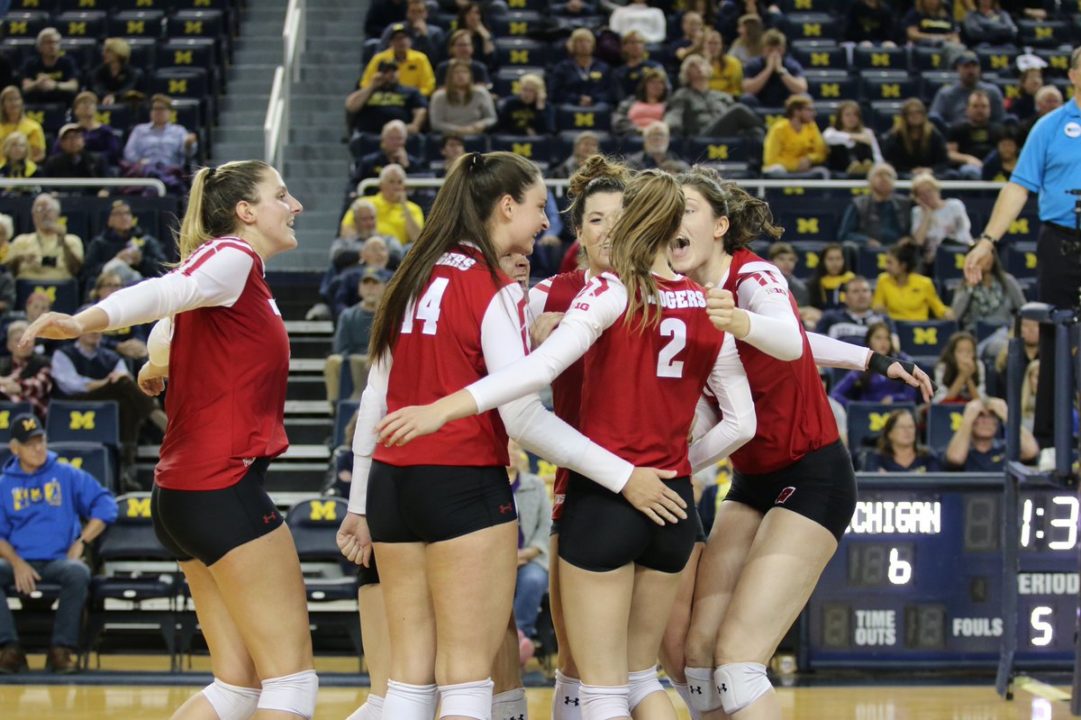 For the sixth-straight season, the Wisconsin volleyball team has advanced to NCAA Regional play, downing Pepperdine 25-16, 25-12, 15-25, 25-13 in the second round of the NCAA tournament on Friday night in the UW Field House.  Current Photo via Wisconsin Athletics

MADISON, Wis. – For the sixth-straight season, the Wisconsin volleyball team has advanced to NCAA Regional play. The sixth-seeded Badgers advanced by downing Pepperdine 25-16, 25-12, 15-25, 25-13 in the second round of the NCAA tournament on Friday night in the UW Field House. The Badgers have won their last eight matches, a season-long winning streak.

The Badgers (25-10) blasted out two a 2-0 lead in the match and 10-6 lead in the third set until Pepperdine (21-9) rode the waves, using a momentum surge to outscore the Badgers 14-5 and win the third period. UW responded right out of the gate in the fourth set, jumping out to a 14-8 lead and never looking back.

WE ARE GOING TO THE SWEET 16!!!! #OnWisconsin pic.twitter.com/7nBAKYlDuh

It was UW’s defense that helped dampen the Waves as the Badgers outdug Pepperdine 77-54 and outblocked them 9-4. Setter Sydney Hilley led all players with 19 digs with Haggerty (18), libero Tiffany Clark (16) and Loberg (15) also tallied double-digit saves.

At the net, middle blocker Dana Rettke paced the Badgers with six stuffs.

Straight from the court
“That team can really do some things to stress you out. That was something we talked about and were concerned about was just how good their serving is. I think you saw that in the third set. Down there on the floor, there was a lot of wicked movement on their balls. To be able to grind and pass the way that we did was a huge reason why we are still playing.

“You got to see the tempo of their outside sets and how fast those are going. Big part of playing a team who really tries hard to stress you out is keeping your composure and battling, fighting and staying present. They are going to get you at times so the ability to keep battling is key.

“We got knocked on the mat in the third (set) and I am really proud of our ability to pick ourselves back up and dust ourselves off and hit back. We did that with execution and I think we did a really good job with that.”
-Head coach Kelly Sheffield

“It felt really good. I thought our passers did a great job against those servers. I thought that all of my hitters, I had so much trust in and they were all being smart. I think that is what you mean by everyone clicking, because everyone did their job.”
-Setter Sydney Hilley

“Oh man, don’t make me cry again! It was incredible just knowing that this is my last game in the Fieldhouse, possibly depending on Illinois. It was just incredible the amount of support I’ve had over the last four years being here. Being able to share this moment of going to the Sweet 16 again with my teammates is incredible.”
– Middle blocker Tionna Williams

“First we have our three seniors here. I thought it was a nice honor to bring them up. They’ve led our team well. They’ve brought our team back to a program that we will continue to strive to be and that we were this year. I think they’ve laid a great foundation culturally that I think our underclassmen are going to benefit from.

“In terms of the match tonight, Wisconsin came out playing well and so did we. We had some chances early and they kept the pressure on. We had to be a little more aggressive serving than we wanted to. They played really well game one and two. Game three we caught fire a little bit serving and got our offense going a little bit.”
-Pepperdine head coach Scott Wong

Up next
The Badgers will play in the NCAA Sweet 16 next Friday.

MADISON, Wis. — Despite a late comeback attempt and third set win, the Pepperdine women’s volleyball team was felled 3-1 by regional-host #6 Wisconsin at UW Field House to bow out of the NCAA Tournament in the second round on Friday night.  After 16-25, 12-25, 25-15 and 13-25 set scores, the Waves finished an inspirational postseason run with a 22-9 overall record and the best program finish since 2011.

Hannah Frohling and Shannon Scully led the Waves with 11-kills apiece, while Frohling added a team-high two aces.  Blossom Sato dished out a team-best 34 assists, while Hana Lishman was good for 18 digs.

This season marks the 23rd appearance for Pepperdine in the NCAA Tournament. The second round appearance was the 9th in program history, with the last being 2011.  Pepperdine thanks seniors Blossom Sato, Heidi Dyer, Jenna Tunnell and Nikki Lyons for the amazing and motivating legacy they will leave behind.

WAVES VS. BADGERS
Wisconsin led the court with 58 kills on a .338 success rate, compared to Pepperdine’s 45 smashes on a .152 hitting percentage.  The Badgers led with 77 digs and 9.0 blocks to the Waves 54 digs and 4.0 team blocks.  Pepperdine led the court with three aces to the opposition’s one.

PLAY-BY-PLAY
The Waves and Badgers opened the match exchanging points en route to a 4-4 tie featuring kills form Hannah Frohling and Shannon Scully.  After that, however, Wisconsin was able to pull ahead and although Pepperdine would bring the deficit within three points at one point, the home team closed the set with a 25-16 set win.

The second set would result similarly to the first, with the Waves and Badgers going point-for-point to open the action, but Wisconsin eventually closing down the Waves’ offense with 28 digs and 4.0 team blocks in the set to win 25-12 and advance the lead to a 2-0 advantage.

Pepperdine showed grit in the third set despite opening with a 10-6 deficit to the Badgers early on.  Kills from Frohling and back-to-back blocks from Tarah Wylie tied the set at 11-11 and the Waves continued with the momentum en route to a 17-13 advantage.  Then, Frohling went to the service line.  A pair of aces later, some big offense and a block from Wylie and Rachel Ahrens extended the lead to 22-13.  Pepperdine used the energy of the 19-5 run in the end of the set to produce kills from Ahrens and Scully and win 25-15 to force a fourth.

The Waves and Badgers went point-for-point to open the fourth set yet again, but after an even 5-5 tied score, the home team put a run of four together to pull ahead.  After a 10-point deficit at 20-10, the Waves picked up a few consecutive points, but the atmosphere was on Wisconsin’s side and the Badgers used it to finish the match with a 25-3 set win for the 3-1 victory.

2018 WAVES
The Waves finish the 2018 season with a 22-9 record and the program’s best finish since 2011.  Pepperdine earned the program’s 23rd berth into the NCAA Tournament and ninth appearance in the tournament’s second round.