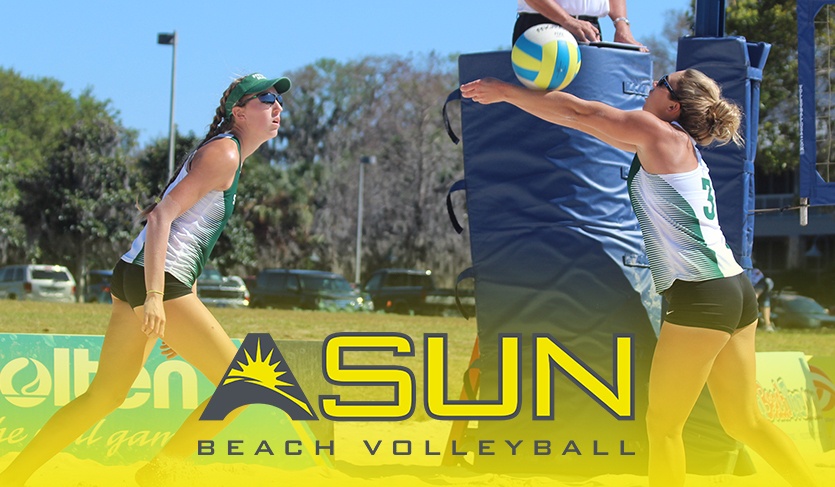 Kaylee Anderson and Emily Carroll’s perfect week earned the Stetson duo their first career ASUN Beach Volleyball Pair of the Week Award, as announced by the league office on Tuesday.

Former ASUN All-Freshmen Kaylee Anderson and Emily Carroll went undefeated for No. 13 Stetson this past week, competing in the No. 2 and No. 3 seeds of the Stetson Beach Invitational. Anderson and Carroll went 4-0 as a pairing, defeating all of their opponents in straight sets. The duo held Morehead State’s number three seed to single digits in both of their frames, before beating Jacksonville State’s second pair by counts of 21-15 and 21-5. On day two of the invite Anderson and Carroll upset No. 9 Georgia State’s third seed, followed by a win against New Mexico’s No. 3 to help Stetson finish this week’s tournament with a record of 3-1. The Stetson pair move to 8-5 on the year and are 1-0 when playing in the two-spot.

Anderson and Carroll face stiff competition at this week’s upcoming Gamecock Invitational, as the Hatters get set to do battle with four of the top-10 teams in the country. Stetson will play No. 9 Georgia State and No. 9 South Carolina on Saturday March 25th, before facing No. 1 USC and No. 4 Florida State on Sunday.

ASUN Beach Volleyball Pair of the Week – Mar. 21st
Kaylee Anderson | Senior | Loxahatchee, Fla. | Business
Emily Carroll | Sophomore | Elburn, Ill.
– First Career ASUN Beach Volleyball Pair of the Week Award
– Record of 4-0 at the Stetson Beach Invitational as the Hatters went 3-1 as a team
– Finished off all four of their opponents in straight sets
– Dropped No. 9 Georgia State’s third seed in sets of 21-13 and 21-15
– Beat Jacksonville State’s No. 2 pairing and New Mexico’s No. 3
– Did not allow Morehead State’s No. 3 seed into double-digits, winning 21-9, 21-2

News courtesy of the ASUN.