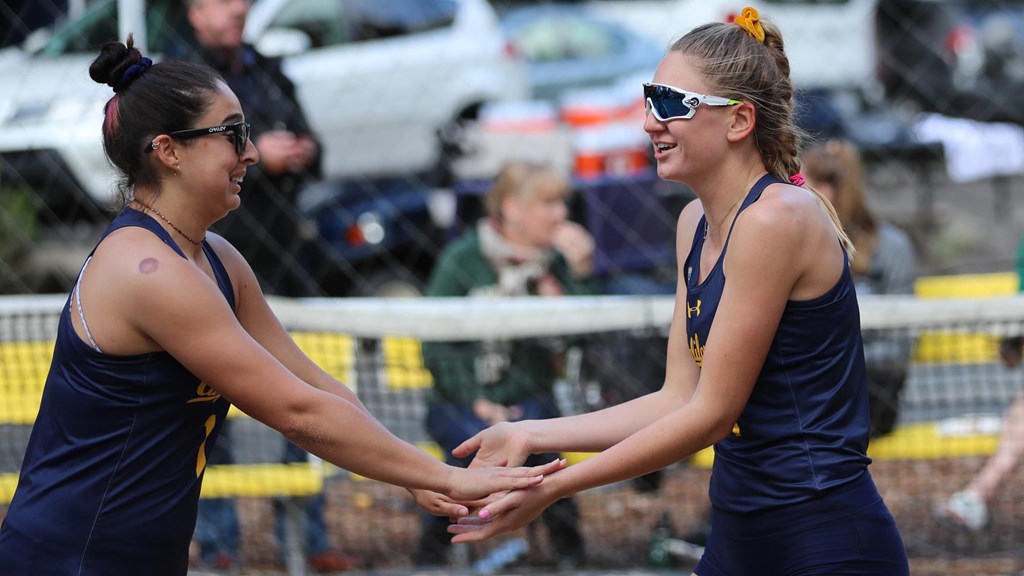 The No. 14 Cal beach volleyball team returns home this week after a memorable weekend in Santa Monica in which it beat its highest-ranked opponent ever and narrowly missed a landmark win over No. 4 USC.  Current Photo via Cal Athletics

The No. 14 Cal beach volleyball team returns home this week after a memorable weekend in Santa Monica in which it beat its highest-ranked opponent ever and narrowly missed a landmark win over No. 4 USC. The Bears went 2-2 at the Pac-12 South Tournament, with a 5-0 win over No. 19 Washington and a 4-1 triumph over No. 11 Arizona. Cal also fell 3-2 to the Trojans and 5-0 to No. 2 UCLA. At No. 14, the Bears have matched their highest national ranking ever by the AVCA. Friday’s match against USF will see the return of former Bears Sabrina Blackwell and Laura Leap, each of whom played at Cal and are now attending graduate school in San Francisco.

SIGNIFICANT VICTORY
When the Bears toppled No. 11 Arizona last weekend at the Pac-12 South Tournament, it marked the highest-ranked opponent Cal had ever beaten. The previous highest-ranked foe the Bears had defeated was No. 14 Loyola Marymount on the first day of the 2016 season. Ironically, Cal almost defeated No. 9 Arizona on that same day in 2016, losing 3-2 and dropping one of the matches in three sets.

POLL POSITION
The Bears have reached a lot of benchmarks this season, and checked off another one this week as they tied for their highest ranking ever in the AVCA national poll at No. 14. Cal was  also ranked No. 14 for three weeks early last season. The Bears also moved up to No. 13 in the DiG Magazine poll this week.

RECAPPING USC
The Bears played strong volleyball all weekend at the Pac-12 South Tournament, and even though it ended in a 3-2 loss, their performance against No. 4 USC was significant. The Trojans are the two-time defending NCAA champions and had never even dropped a set against the Golden Bears in four previous meetings all-time. This time, Cal won matches at the No. 4 and No. 5 spot and the No. 3 team of senior Bryce Bark and sophomore Madison Dueck almost forced a third set before falling 21-16, 25-23.

FRESHMEN MAKE IMPACT
The Bears have four freshmen in their regular playing rotation and they have all already made their impact on the program. The all-freshmen pair of Mima Mirkovic and Alexia Inman have been dominant so far, going 13-3 while playing the past 12 duals as the team’s No. 1 pair. Freshman Caroline Schafer is 14-2, having gone 13-1with partner Mia Merino on the No. 4 pair and 1-1 with fellow freshman Maddie Micheletti, also at No. 4. Micheletti, meanwhile, is also 14-2, having gone 13-1 at No. 5 playing with junior Grace Campbell.

MIRKOVIC BRINGS INTERNATIONAL SUCCESS TO CAL
Before freshman Mima Mirkovic even played a point for the Bears, she was already an accomplished beach volleyball player. Mirkovic won back-to-back bronze medals as the FIVB World Championships in each of the past two years, taking third at the Under-19 championships in 2016 and repeating the feat last year at the Under-21 tournament.

ABOUT USF
• Former Bears Sabrina Blackwell and Laura Leap play for the Dons
• USF’s victories have come against Santa Clara and Sac State
• Blackwell plays on the Dons’ No. 4 pair with partner Erica Ronda