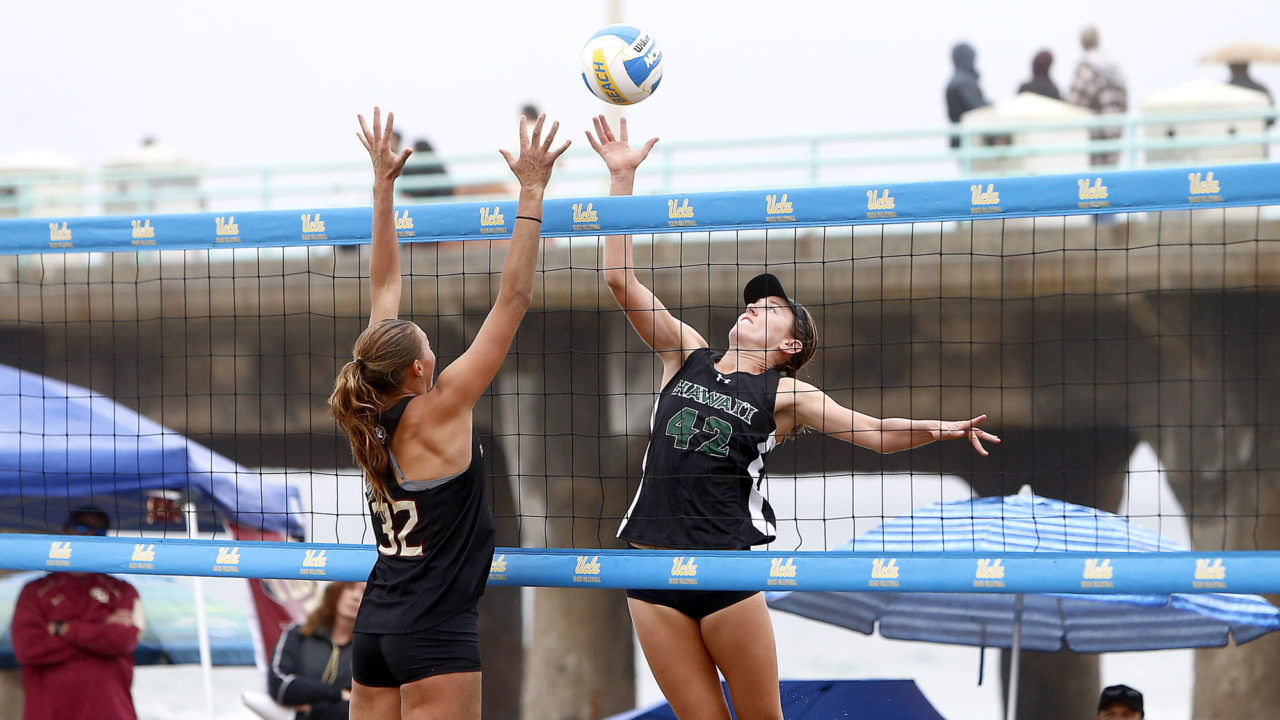 The No. 3 University of Hawai'i beach volleyball team puts its 13-match win streak on the line when it competes in the Big West Challenge hosted by Sacramento State, March 30-April 1.  Current Photo via Hawaii Athletics

The No. 3 University of Hawai’i beach volleyball team puts its 13-match win streak on the line when it competes in the Big West Challenge hosted by Sacramento State, March 30-April 1.  All six Big West teams will compete in the three-day affair with UH competing on the first two days.

After going a perfect 4-0 this past weekend in the Gamecock Challenge in South Carolina, the SandBows extended its win streak to a 13, tying a program record. They’ll now have a chance to set a new mark when the team faces five Big West foes, beginning with CS Bakersfield (2-6) on Friday at 6:00 a.m. HT.

UH will also play CSUN (9-1) on Friday, before facing a stern test on Saturday with three matches. Meetings against No. 6 Cal Poly and No. 5 Long Beach State will bookend a match vs. host Sacramento State (0-8).

Like Hawai’i, Cal Poly (16-2) is also on a 13-match win streak and boasts a win earlier this year against a Pepperdine squad that is currently ranked No. 1 in the nation. The Mustangs only losses have come against USC and LSU. Meanwhile, Long Beach State (12-1) comes into the tournament with just one loss in 13 matches. The 49ers have defeated the likes of Florida State and Stanford with is only loss coming to Pepperdine.

The tournament will serve as a prelude to the Big West Championships, which UH will host April 27-29 at Queen’s Beach. The SandBows are the two-time defending champion are 22-2 against Big West schools since 2014.

Following the Big West Challenge, the Rainbow Wahine will return home to host Loyola Marymount, Utah and Washington in the Queen’s Cup, April 7-8, at Queen’s Beach.

All-Time Series Results: UH is 22-6 all-time against Big West teams…UH is undefeated against Cal Poly (6-0), CSUN (2-0), CS Bakersfield (3-0) and Sacramento State (1-0)…The SandBows are 10-6 all-time against Long Beach State and have won six of the last seven meetings…Long Beach State handed UH its only loss in last year’s Big West Challenge, though UH bounced back to  beat the 49ers twice later that month to claim its second straight Big West Tournament title.