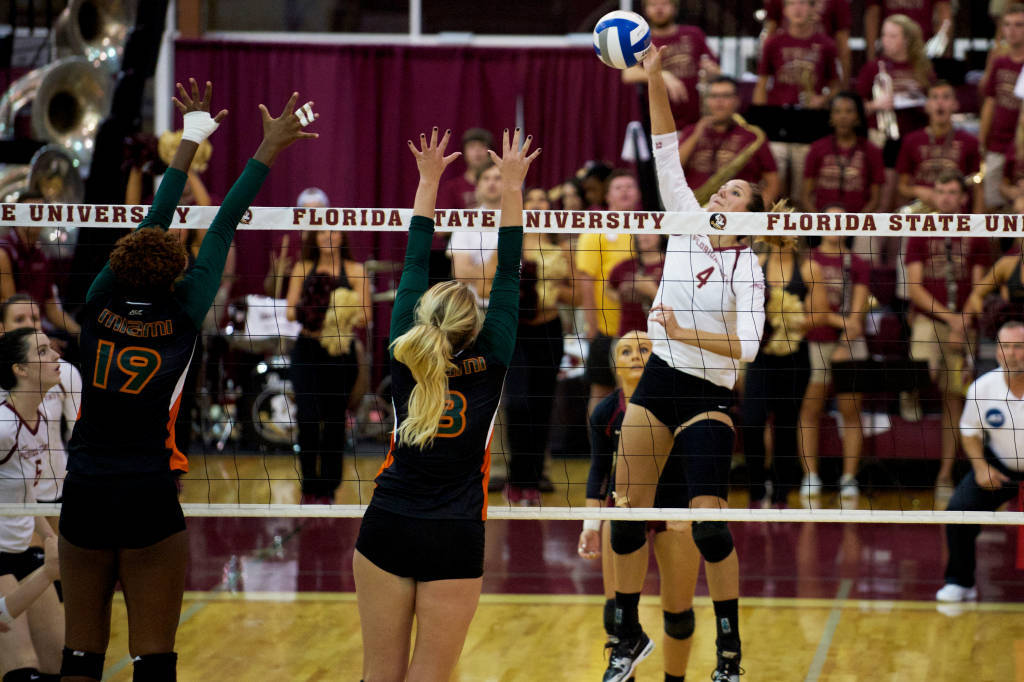 “We played really well with the exception of part of set two and little bit at the first of set three,” said Florida State head coach Chris Poole. “We’ve had some injuries that we’ve had to deal with this season and this week so it was good to see us put it all together and play really well.”

This is Florida State’s 9th consecutive win in an ACC home opener.

The Seminoles came out firing early with an efficient .609 hitting percentage in the first set (14 kills on 23 attacks with 0 errors).

Senior Katie Horton scored 13 kills for a personal .591 hitting average in the match – her 5th time this season in double digit kills and combined with 11 digs for the 14th double-double of her four year career.

Meanwhile, the Florida State front row of Melanie Keil, Christina Ambrose, a Milica Kubura held Miami to just .095 hitting in the match with 9 team blocks. Kubura added 11 kills of her own to that total.

Miami played a tight rotation of just 9 throughout the match and Anna Haak led with 13 of the team’s 31 kills on a .229 hitting percentage. Olga Strantzali chipped in 3 service aces for the Hurricanes.

Horton, who reached double figure kills for the fifth time this season, finished off an errorless performance after attacking the Hurricane (5-6, 0-1 ACC) defense on 22 occasions as she posted a .591 attack percentage. Kubura, also notching her fifth double-digit kill outing of the season, made 16 total attacks and committed one miscue as she posted a .625 attack percentage.

Senior Hailey Luke, who recorded a team-high 19 assists, anchored a rhythmic Florida State offense that tallied 44 kills and limited itself to seven errors en route to a .457 attack percentage. It marked the Seminoles’ sixth-best attack percentage in a three-set match against an ACC opponent since the rally scoring era began in 2001.

Trailing 2-0 in the match, Miami regained its focus during the intermission and opened the third set on a 6-1 run behind Olga Strantzali’s service game. Timely kills by Luke, Bozena Culo and Mara Green helped the Seminoles trim the lead to 13-10 by scoring nine of the next 16 points.

Kills from Ambrose and Green along with three Miami errors opened the door for an 8-3 Seminole lead early in the second set. The Hurricanes were again forced to burn an early timeout, surrendering seven of the next 13 points, which included three kills by Kubura and two from Horton, as they fell into a 15-9 hole.

A strike by Sakile Simmons pulled Miami within four, but two kills each from Horton and Calkins provided Florida State with a 21-13 edge late in the second. Ambrose drove home the final two kills of the set as the Noles took a 2-0 lead into the intermission with a 10-point win.

“We played really well with the exception of part of set two and little bit at the first of set three,” said Poole. “We’ve had some injuries that we’ve had to deal with this season and this week so it was good to see us put it all together and play really well.”

The Seminoles capitalized on five Miami errors and two kills by Ambrose top open up a 10-5 lead in the early stages of the first set. Florida State’s offense remained in stride, despite a Hurricane timeout, as the service game of Culo along with three kills off the hand of Green and two from Horton extended the Seminoles’ advantage to 16-5.

A series of kills by Anna Haak brought Miami with nine points, but it was two kills by Horton coupled with a series of errors by Strantzali that provided Florida State with a 21-9 cushion. The Seminoles, who posted a .609 attack percentage in the frame, used kills down the stretch by Ambrose and Kubura to complete the 13-point victory.

When the Seminoles square off against Louisville (5-5) at 1 p.m. on Sunday, Florida State will be looking to avenge a five-set loss that took place on Nov. 15, 2015 and ultimately gave the 2015 ACC Championship to the Cardinals. It marks only the third time that the former Metro Conference rivals have met as members of the ACC.

Seminole fans will have the opportunity to watch the match as part of the ACC Network Extra package with commentary from Cecile Reynaud and Shawn Davison. Those fans in attendance at the match will receive free koozies and a special commemorative Katie Horton poster that she will autograph following the match.

TALLAHASSEE, Fla. – The University of Miami volleyball team dropped its ACC opener at No. 15 Florida State.

The two in-state rivals met in Tallahassee to open ACC play for the second consecutive season. Miami (6-7, 0-1 ACC) battled the host Seminoles, but could not defeat Florida State (8-2, 1-0 ACC) on its home floor on Friday night.

“It was a little bit of a perfect storm,” Miami head coach Jose “Keno” Gandara said. “They’re a good team and they did some things really well and we were unable to get in a good offensive rhythm and that always puts pressure on our defense. It was a lopsided match the whole way through. They were tough and I’m not sure if we were tough enough.”

The Hurricanes and Seminoles played tight early in the opening set, with the Noles leading, 6-5, in what started out as a see-saw battle. But Florida State got on a hot streak, winning 10 consecutive points to take a 16-5 lead. The big gap would be too much for the Canes to overcome in the first set, as FSU took a 1-0 lead in the match with a 25-12 win.

“We just try to focus on our statistics and what we know,” Gandara said. “We don’t control them and they were doing some things well. We just focused on the things we could have done better. That was the message [after Set 1].”

The Seminoles jumped out to a 9-4 lead in the second set, but Miami was resilient. The Canes charged back to within two, 13-11, forcing the Noles to call timeout to try and slow Miami’s momentum. The decision would prove to be a wise one, as Florida State would build a 20-14 lead. The Seminoles would take the second set, 25-15, and head into the intermission up two sets to none on Miami.

Miami opened the third set on a roll, bursting out to a 5-1 lead that included two service aces from Olga Strantzali. Florida State would call timeout to try and regroup, but Strantzali ripped an ace out of the break to keep momentum on Miami’s side. Florida State would claw back to even the third set at 14. The teams then traded points until FSU took a 19-17 lead and Miami called timeout. The Seminoles would pull away to take the third set, 25-19, and the match.

“I think that as a team we need to learn to let go of mistakes,” Miami junior Sakile Simmons said. “When I say that, I don’t mean not caring and letting more points happen. It’s more about knowing what you did wrong and fixing it. We can’t wait because teams aren’t going to wait for us.”

Lucia Pampana had four kills, two digs and a service ace, while Simmons recorded three kills and a block. Kolby Bird had two kills, a block and a dig from the right side.

“This was a learning lesson,” Simmons said. “We weren’t good enough to win today. We know what we need to fix and where we need to go from here.”

The Canes will host Notre Dame at 11:30 a.m., on Sunday in their ACC home opener. Following this weekend’s matches, Miami will host Boston College and Syracuse during the second week of ACC play. Boston College will face Miami at the Knight Sports Complex at 7 p.m. ET on Sept. 30, while Syracuse plays the Canes at 1 p.m. ET on Oct. 2.