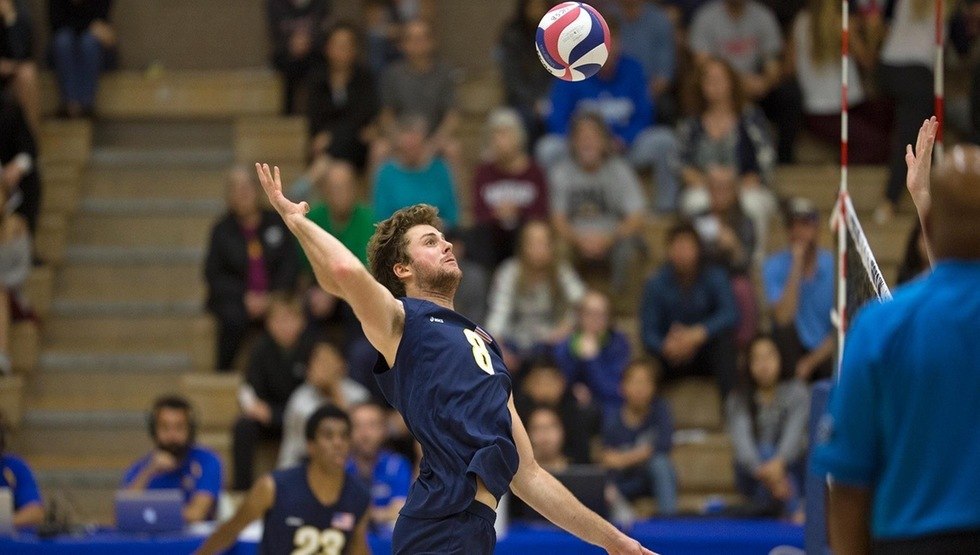 #15 UC Santa Barbara was able to make a comeback against Harvard, fighting from a 0-2 deficit to take down the Crimson in five.

The Gauchos used players that normally don’t contribute much in the match to propel them ahead to the five set victory. Brandon Hopper and Roy McFarland made the most of the opportunity they were given to put the team back on the right track. Hopper put down 11 kills on a .520 hitting percentage while McFarland added 13 kills in just three sets played.

Late in the fifth set the Gauchos trailed the Crimson 14-12, facing two match points for their opponent. Randy DeWeese put down a strong serve and set Hopper for a kill to tie up the fifth at 14 all. The Gauchos were able to hold on to their late set momentum to take the set and match at 17-15.

DeWeese only saw action in three sets, but made a huge impact for the Gauchos – dishing out 38 assists, picking up eight digs and putting down four kills. Hayden Boehle recorded a double-double with 13 kills and 11 digs, while Henri Cherry added another 11 kills. In the back court, Grady Yould was able to save 18 balls from hitting the floor.

On Harvard’s side, Casey White posted a double-double of 19 kills and 14 digs, while Erik Johnsson put down 11 kills. From the back row, setters Marko Kostich and Matthew Ctvrtlik each recorded double-doubles. Kostich dished out 29 assists and 11 digs, while Ctvrtlik was so close to a triple-double with 30 assists, 12 digs and nine kills.

The Gauchos (10-11) did well enough to send the game to a do-or-die fifth after dropping the first two sets, but found themselves in hot water once again trailing 14-12 and facing two match points for the Crimson (6-9).

But at that point, rarely-used players Brandon Hopper (11 kills on .520 hitting, team-high eight blocks) and Roy McFarland (co-team high 13 kills in just three games) made the most of their opportunity, putting the team on their back to lead a victory-saving 5-1 run down the stretch.

McFarland, who registered career highs with 13 kills and nine digs, started the comeback with a monster spike from the left side, sending setter Randy DeWeese (38 assists in three sets) to the service line. DeWeese’s strong serve led to a poor Harvard pass giving UCSB a good opportunity, leading to a Hopper kill that made it 14-14 and forced a Harvard timeout.

After the break, both Hopper and Corey Chavers (six kills, two aces in limited action) got a good read on a long set from the back row, getting to their right to stuff a Casey White swing and give UCSB its first match point.

Though DeWeese served into the net on the next point, McFarland responded with consecutive kills to seal the epic comeback for the Gauchos, including an impresive match-winning kill off the block from the back row.

“It’s good that we have some depth and have guys who are ready to come in and make a difference, and they did that tonight,” said UCSB head coach Rick McLaughlin. “Roy made a big difference, Corey Chavers came in and got us out of a big hole with three great serves in the fourth, Hopper was steady as a rock. It’s good to see some new faces get in there and take care of business, they’ve been waiting a long time.”

Of course, the fifth-set heroics wouldn’t have been possible without the strong play of the team in the third and fourth sets, which coincided with the insertion of DeWeese and McFarland after the second game.

Freshman opposite Spencer Fredrick was the driving force behind UCSB’s win in the third, chipping in five of his nine kills in the frame as the Gauchos hit .308. Libero Grady Yould, who had a career-high 18 digs overall, had five key scoops in the third, helping limit the Crimson to .229 hitting after they hit over .300 in the first two stanzas. The Gauchos ended the third on a 4-1 run, with four different hitters chipping in a kill including a momentous spike of an overpass from DeWeese.

The fourth set was the tighest of the match, producing 13 ties and seven lead changes while the Gauchos needed to accrue 33 points to win it. Neither team hit over .200, and with plenty of long rallies it was the Gaucho block (5.5 blocks in the set) that made the difference, with Hopper and Hayden Boehle (13 kills, 11 digs) chipping in three block assists apiece. The Gauchos trailed 23-20 at one point, but two McFarland kills, a Harvard attack error, and a Hopper-Chavers block rescued UCSB from the brink.

After a long back and forth, UCSB broke through on a quick hit off the block from Hopper and a left-side swing from Boehle that was blocked out of bounds.

Harvard, which runs the 6-2 offense rarely seen on the men’s side, was led by Casey White’s 19 kills. Setter Matthew Ctvrtlik finished a kill short of a triple-double with 30 assists and 12 digs.

UCSB wraps up a four-match homestand on Wednesday night against Concordia University Irvine before taking next week off for final examinations. The CUI match, originally scheduled for Thursday, was moved up a day.

Casey White recorded a career-high 19 kills to lead Harvard’s attack, while Erik Johnsson and Riley Moore posted 11 and nine kills, respectively. Matthew Ctvrtlik dished 30 assists on the night, with support from Marko Kostich who earned 29 helpers.
Trevor Dow tallied seven blocks to lead the Crimson defense, helping to limit UCSB to a .243 hitting percentage. Four members of the Crimson added double-digit digs: White (14), Chase Howard (13), Ctvrtlik (12) and Kostich (11).
In the first set, Harvard pulled away with an 8-6 advantage over the Gauchos. In the middle of the stanza, Dow, White and Kostich all recorded two kills to put the Crimson ahead, 19-15. A balanced effort from the Crimson attack led the team to a 25-20 decision.
Harvard extended their lead to two sets in the second frame, with a 25-22 victory. The two teams traded points through the first 28 points of the set, but a service error from UCSB started the Crimson on a 5-1 run, to lead the Gauchos by two, 20-18. A kill from White helped put the final stamp on the set to lead UCSB, 2-0.
UCSB took the lead in the third set, recording a five-point lead at the midway point. Although the Crimson recorded a 5-2 run to come within two points, the Gauchos capitalized on successive service errors to lead 19-17. White stepped up and recorded two back-to-back kills to tie the set at 20 apiece, but the Gauchos took the set with a kill from Spencer Fredrick, 25-23.
The Crimson took a 4-0 lead in the fourth stanza, after falling the Gauchos in the third period. UCSB battled back to tie the set after facing an early four-point deficit, but a timely block by Dow and Johnson set up the opportunity for Harvard to win the period. Tied at 25 points, the teams battled back-and-forth until both remained tied at 31 apiece. UCSB recorded two consecutive kills to take the fourth set, 33-31.
Harvard had a chance to put the match away, leading 8-6 in the decisive fifth set. UCSB battled to tie the match at 11-11, and used its momentum to win five of the last six points in the period to win the set, 17-15.
Harvard will face USC tonight at 7 p.m. at the Galen Center. The game will be streamed on the Pac-12 Network.