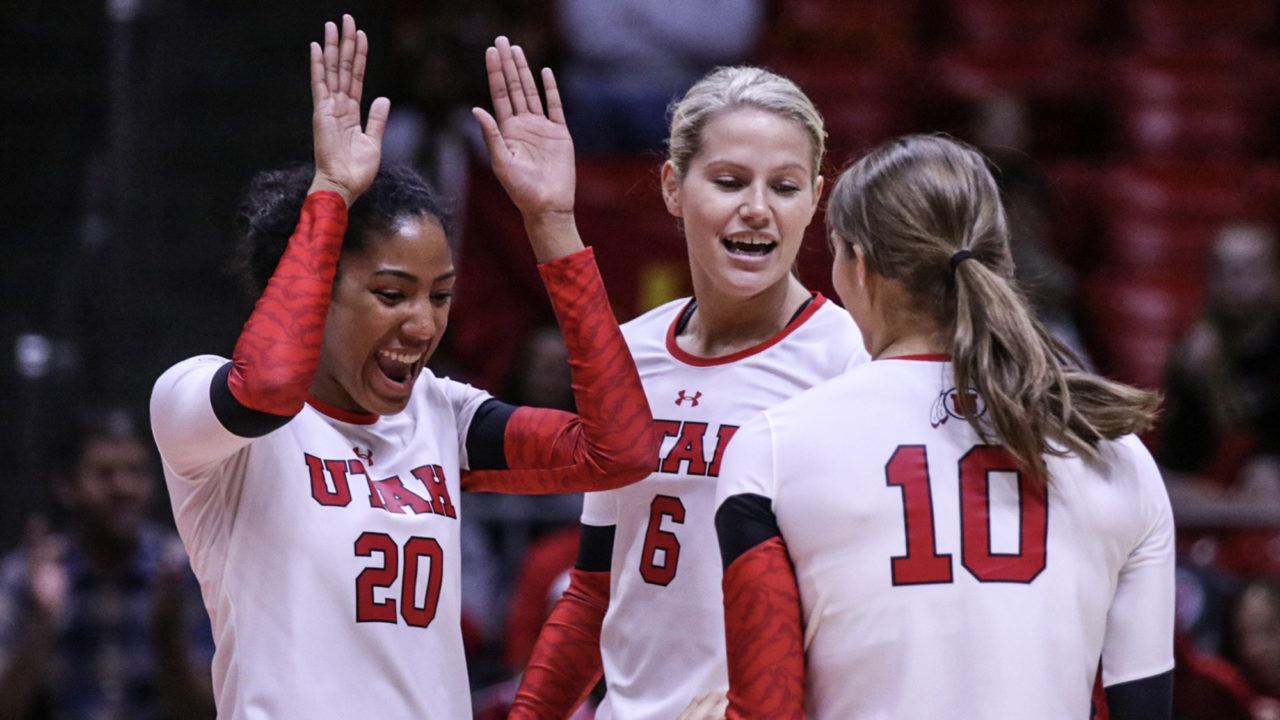 The Utes put up six blocks in the opening set win. Utah jumped out to an 11-2 lead with help from six Green bay errors and never looked back. Utah closed out the victory on a 14-6 run as four players turned in kills and the team registered four blocks, including three by Barton.

Utah added four stuffs and two aces in Set 2 in another near start to finish victory. Utah went up 9-5 behind three Wolf kills. The Phoenix caught up at 10-all including two Ute errors. From there, Utah broke away with an 11-2 run, featuring two  Barton kills and two Oblad blocks to take a 21-12 lead. Luafalemana added two kills to get the Utes to set point at 24-16, then Torre Glasker wrapped up the 25-16 win with an ace.

The Utes put down 17 kills in the final win. Utah went up by five at 13-8 as Luafalemana and Anae downed three kills apiece. Gren Bay was within three at 13-10, but could not keep pace with the Utes down the stretch. Utah ran away with the set with a 12-5 final run. A Phoenix hitting error made it 24-13, then a Lauren Sproule kill capped the sweep three serves later. Luafalemana put down three kills in the final rally.

enior Tawnee Luafalemana notched a season-high 10 kills to lead the No. 18-ranked Utah Utes to a sweep over the Green Bay Phoenix (25-9, 25-16, 25-15). Utah earned its fifth sweep on the season Saturday afternoon in the Huntsman Center.

Utah jumped out to a quick start to open the match forcing Green Bay to call its first timeout trailing 7-2. Out of the timeout, the Utes rallied off four more points to lead 11-2 and the Phoenix had to use its final timeout of the set. Green Bay cut the lead to 13-7 midway through the first set, but a kill from freshman Dani Barton began the 12-2 run to clinch the first set, 25-9. Utah hit .562 in the frame and added six total blocks, while limiting Green Bay to a -.214 hitting percentage.

Tied 10-10 in the second set, junior Lauga Gauta pushed the Utes ahead with a kill which would spark a 11-1 run. Utah notched kills from Barton, freshman Kenzie Koerber, and junior Berkeley Oblad during the run, while also adding in blocks from Gauta, Koerber, and Oblad. Leading 23-16, Utah closed out the second set with a kill from Luafalemana followed by a service ace from sophomore Torre Glasker.

The third set started back-and-forth until a kill from Oblad gave the Utes a 14-10 lead and forced Green Bay to call a timeout. Green Bay scored out of the timeout, but the Utes rallied to finish the match on an 11-3 run to take the set 25-15. Luafalemana totaled six kills in the set, while the team had a .429 hitting percentage.

Luafalemana finished the match with a season-high 10 kills on a .615 hitting percentage. Barton recorded nine kills on .350 hitting, while Oblad and senior Adora Anae each tallied five kills for Utah. Oblad hit .556 on the day and Anae had a hitting percentage of .417.

The Utes close out the Utah Classic tonight against Missouri with the first serve scheduled for 7 p.m. inside the Huntsman Center.

The Green Bay volleyball team wrapped up its play at the Utah Classic on Saturday, dropping a pair of tough matches to No. 18 Utah and No. 15 San Diego in straight sets. The Phoenix (4-5) was unable to grab a win over the weekend, but faced stiff competition that will prepare the team well for the Horizon League season.

#18 Utah 3, Green Bay 0
The tournament hosts, and nationally ranked Utes, controlled the opening set and the match from the very beginning. Utah claimed a convincing 25-9 win in the first set, before snagging 25-16 and 25-15 set wins to earn the sweep.