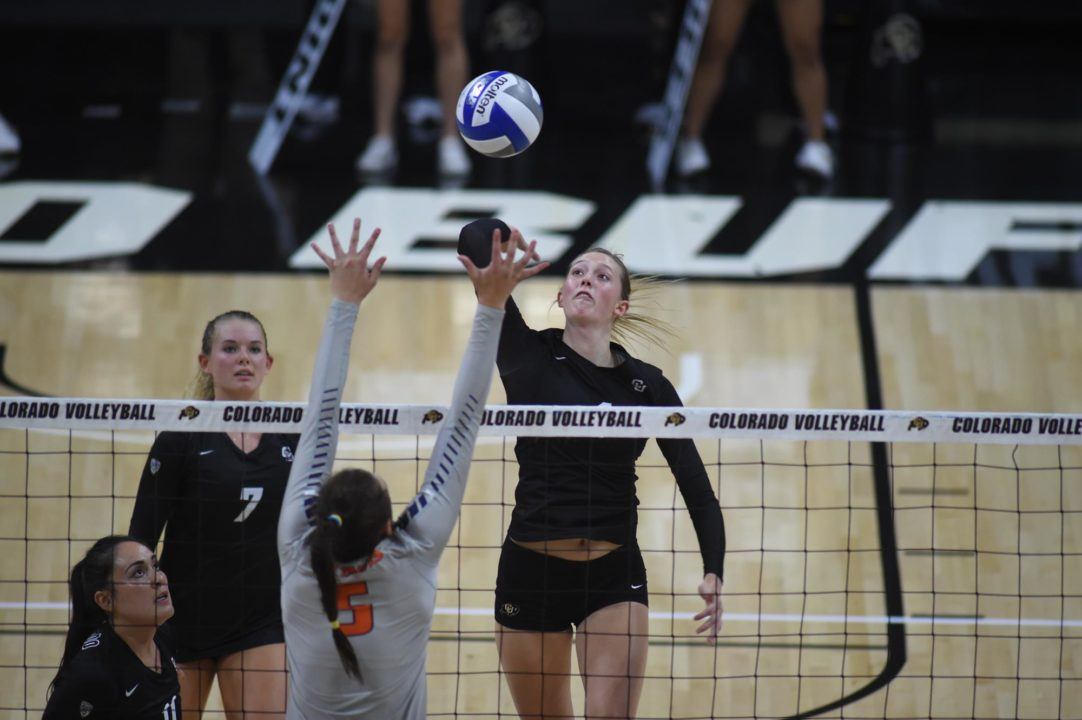 The Colorado Buffaloes were ranked in the top 25 early this season, and while their 6-14 record in the Pac-12 (and 14-16 record overall) is unlikely to earn them a bid to the NCAA Tournament on Sunday, they did end their season on a high note with a 3-2 win over the 17th-ranked Utah Utes. They simultaneously may have spoiled Utah’s chance at a top 16 national seed.

The win ended a 5-game losing streak for Colorado thanks to a 13th double-double this season from sophomore Alexa Smith. She had 13 kills and 16 digs for Colorado in a winning effort. Senior Katelyn Cuff ended her college career with 11 kills and a .526 hitting percentage.

Utah came out flat in the first set, and the Buffaloes led wire-to-wire to go up 1-0. The second set was almost the opposite – the Utes jumped out early to tie game at 1-1 heading into intermission – thanks in part to holding Smith without a single kill in the frame

Smith woke up in set 3, single-handedly earning 9 of the Buffaloes’ 16 kills.

As Smith went quiet again in the 4th, with no kills once again, Utah jumped out early and rode 7 kills from Carly Trueman to a 2-2 tie.

In the 5th and decisive set, Colorado never trailed, and while Utah went to their star Adora Anae time and time again, the Colorado defense held her at bay with 4 kills but only 3 errors.

Anae wound up with 23 kills on the game, but thanks to 12 errors her percentage was only .177.

WHAT HAPPENED: Sophomore Alexa Smith recorded her 13th double-double this season with a team best 13 kills and 16 digs while adding a pair of blocks in the win.

Colorado’s seniors all shined in their final match. Katelyn Cuff was second on the team with 11 kills and hit a match-high .526 with just one error on 19 attacks. Cuff also played well on defense, posting six blocks. Kiara McKibben and Marie Zimmerman both set very well. McKibben handed out 27 assists and recorded 10 digs for her seventh double-double this season and Zimmerman recorded 21 assists, tying a season-best, and added six digs. Cierra Simpson was second on the team with 15 digs in the win.

Sophomore Naghede Abu also had a great season-ending match with 10 kills and six blocks. Abu did not commit an error on 25 attacks to hit .400.

SET 2: CU coach Jesse Mahoney took an early timeout in the set after Utah recorded a 6-1 lead. The Utes took the next point, but CU came back with three straight points (7-4). Just as soon as the Buffs started to make a dent in the score, the Utes strung together a 7-3 run to bring the score to 14-7 and force CU to spend its final timeout. The Buffs were not able to stop Utah’s momentum and lost the set 25-16.

SET 3: Utah had an early 7-5 edge on the Buffs, but CU rallied back with a 5-2 run to take a 10-9 advantage. The Utes retook the lead with two straight points out of a quick timeout and the Buffs answered that rally with two points of their own. The score was tied at 12-12 when the Buffs pulled together a 6-1 run to go up 18-13, causing UU to take its final timeout of the frame. The Utes were able to pull within three points of the Buffs three times down the stretch, with the last time coming at 23-20, but Colorado finished the game 25-20 after consecutive kills from Joslyn Hayes and Anna Pfefferle.

SET 4: The Utes jumped out to a 6-2 lead and increased their advantage to 15-9. CU recorded a pair of blocks after the media timeout, bringing the score to 15-11, and kept attacking. The Buffs got the score within three points (18-15), causing the Utes to take a timeout. Utah took the next two points (20-15), but the Buffs were not finished and kept the score close. CU took a timeout at 23-20, but the Utes finished the game two points later (25-20), forcing the fifth and deciding set.

SET 5: The Buffs took a 4-1 lead in the final set, causing Utah to spend an early timeout. Utah recorded the next two points (4-3), but CU answered with a kill from Smith to regain a two-point lead. The Buffs led 10-6 when UU called its final timeout. The Utes took the first point out of the break and a couple points later had narrowed the Buffs’ lead to just two (12-10). UU evened the set up two points later and after exchanging points, the set was tied again at 13-13. CU wasn’t going to let this one slip through its fingers though, and took the game 15-13 with kills from Pfefferle and Stephanie Shadley.

NOTEABLE: The win against Utah snapped CU’s five match losing streak…It is the first win in Salt Lake City, Utah for the Buffs since joining the Pac-12 in 2001…Utah leads the all-time series 9-8; the two teams split meetings this year as Utah defeated CU (3-2) to start the Pac-12 season on Sept. 21… CU is 6-4 in five-sets matches this season… This is CU’s fifth win against a ranked team this season; the Buffs finish the season 5-10 against ranked opponents…Cierra Simpson finished her career with 1,840 digs, which is CU’s all-time digs record…She is also the rally-scoring era leader in sets played at 493.

QUOTABLE:
Jesse Mahoney, head coach
“I’m happy for our players and especially for our seniors to finish the season playing their hearts out and beating a top-25 team. It wasn’t always pretty today but we found a way to win. Katelyn Cuff and Naghede Abu were unstoppable in the middle and came up with big kills in set five.”

“I’m proud of the fight this team showed in the last third of the season – they kept playing hard even though the wins weren’t coming. It’s something to build on heading into the spring.”

Colorado outhit the Utes .324 to .189 on the way to taking the first set 25-19. Utah battled back from a couple of early deficits, but runs of 5-1 and 6-2 would later put the Buffs up 20-14 and force Utah to call a timeout. Utah would win four of the next six points, but CU closed out the frame winning three of the final four points.

Anae opened the second set with three consecutive kills and the Utes later jumped out to a 6-1 lead following a kill from sophomore Jessie Openshaw. CU called timeout and was then forced to call its final timeout of the frame down 14-7 following an assisted block by both juniors Eliza Katoa and Tawnee Luafalemana. Back-to-back blocks from sophomore Berkeley Oblad put Utah up 23-13 and despite a mini run from the Buffs, Utah managed to take the set 25-16 and head into intermission tied 1-1 with the Buffs.

Utah opened the third set with a 4-1 run, but CU took its first lead, up 10-9, with a 4-0 run and that forced the Utes to call a timeout. Utah would have to call its final timeout of the set following a 6-1 run in which the Buffs pushed its lead to 18-13. A block from Katoa would get Utah back within three points, down 23-20, but CU scored the final two points to take the set 25-20 and a 2-1 lead heading into the fourth set.

Utah led throughout the entire fourth set, but CU kept things close until a kill from junior Carly Trueman and then a Buffs attack answer gave Utah the frame, 25-20, and notched things up at 2-2. The Utes hit just .178 in the fourth set, but did however limit the Buffs to hitting just .062. Trueman tallied seven kills in the frame to lead the way for the Utes and send the match into a decisive fifth set.

CU opened the final set winning four of the first five points and that forced Utah to call a quick timeout. The Utes would battle back, but CU took an 8-6 lead in the set as both teams traded sides of the court. Back-to-back hitting errors by Utah would push CU’s lead to 10-6. CU led 12-8 until a service error sparked a 4-0 Utah run to tie the frame at 12-12. Both teams traded points to notch things at 13-all, but CU closed out the set with kills from Stephanie Shadley and Anna Pfefferle to take both the set (15-13) and the match.

Anae led a quartet of players who finished with double-digit kill efforts, posting a match-high 23 digs on the afternoon. Anae topped the 20-kill mark for the 14th time this season and for the 26th time in her career. Meanwhile, Trueman added 18 kills, Oblad registered 11 kills and Katoa chipped in with 10 kills.

Openshaw and freshman Bailey Choy registered double-doubles on the day. Openshaw led the team in both assists (30) and digs (17), while Choy added 28 assists and 15 digs. Freshman Brianna Doehrmann (13 digs) and sophomore Megan Shughrou (11 digs) both posted double-digit dig efforts in the match.

CU out-blocked the Utes 12.5 to 10.0 in total team blocks, but Luafalemana led the way with a match-high six total blocks. Katoa added five assisted blocks and Oblad chipped in with four.

Utah will now await word for an at-large big into the 2016 NCAA Tournament, with selections set to be released Sunday evening at 7 p.m. (MST). The selection show will be aired live on ESNPU.