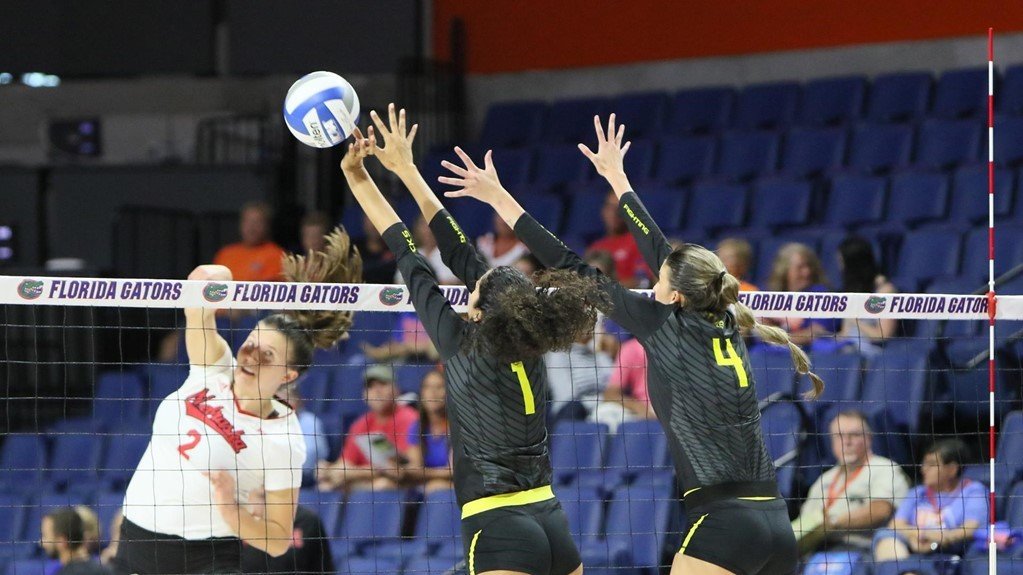 This is the first time the Ducks have beaten a top-five team since they defeated #1 Penn State on December 12, 2012. Current Photo via Oregon Athletics

Oregon began their 2017 season with an upset win over the #5 ranked Nebraska Cornhuskers in four sets. The Huskers were playing without senior 3rd-year captain Kelly Hunter, who is recovering from an injury. Hunter is expected to play in the Huskers’  match on Saturday against Florida, but head coach John Cook said she wasn’t ready to set back-to-back games yet.

The Ducks overpowered the Huskers in kills 62-54, in blocks 10-8, assists 55-51 and hitting percentage .222 to .174. This season, Oregon is under new leadership after the former coaches were ousted this spring, now Matt Ulmer is off to a good start with his Pac-12 team.

This is the first time the Ducks have beaten a top-five team since they defeated #1 Penn State on December 12, 2012.

DUCKS WIN! #18 Oregon opens the Matt Ulmer era with a 3-1 victory over #5 Nebraska! What a way to start the season! #GoDucks pic.twitter.com/7nNJOk43IW

Nebraska looked to be in pretty good shape to begin the match, going on a 10-2 run to start off play with Oregon burning through both of their timeouts in this period. From there, the Ducks made their slow and steady comeback on the Huskers. Mid set, Oregon tied things up at 14-14 then taking their first lead of the match at 15-14. The remaining of the set was a back and forth battle until Oregon broke away late to take the first set 25-20.

The second set was more of a challenge for both teams as they traded points with each until Oregon took a small lead at 20-16, which they were able to keep until they took the set 25-21, going up 2-0 in the match.

In the third set, Nebraska was the team to falter at the start, falling behind early at 1-5. They quickly regrouped to catch up and play the back and forth game the rest of the set. The Huskers were able to take the third set 26-24 calling for a fourth set in the match.

Nebraska had a two point advantage going into the later portions of the fourth set at 18-16 but were unable to hold on, with the Ducks coming back to tie things up at 20-20. From there, they took the lead and kept it on their way to their first win of the season 25-23.

Leading the Ducks to victory was Lindsey Vander Weide with 14 kills and four blocks, while Willow Johnson added another 13 kills and three blocks and Taylor Agost posted 12 kills in the win. Brooke Van Sickle dug up a match-best 22 digs. Posting a double-double for Oregon was setter August Raskie with 21 assists and 14 digs.

In her debut match for the Huskers, freshman Jazz Sweet slammed down 14 kills, while Mikaela Foecke posted a double-double with 13 kills and 17 digs. In the back court, Kenzie Maloney picked up 18 digs and put down two aces. Annika Albrecht also posted nine kills, one ace and 16 digs. Filling Hunter’s shoes at setter was redshirt freshman Hunter Atherton with 47 assists, three blocks and one ace.

The Ducks (1-0) made it a memorable debut for new head coach Matt Ulmer, securing the program’s first win over a top-five team since 2012 and its first-ever win in the VERT Challenge.

“What a great first match,” Ulmer said. “Nebraska’s a great team and it was a really fun environment. I’m so proud of our team. The way we fought and the heart we showed, it was just so much fun. It felt like the team and I were one out there, working together as a single unit.

“This is something you dream about your whole life, and then you finally get your chance, and it didn’t’ disappoint. I am just so grateful to be around this team and so grateful for this opportunity. What a special night.”

How it Happened: It was all Nebraska to open the match, as the Cornhuskers (0-1) raced out to an early 10-2 lead. Ulmer used both of his timeouts to regroup his team, and Oregon fought back to pull even, 15-15. After back-to-back Nebraska points, the Ducks ripped off an 8-1 run and finished the set on a 23-10 run to take an early 1-0 lead.

The Ducks and Cornhuskers played to a 16-16 tie in a back-and-forth second set before the Ducks put together another run, this time a 4-0 stretch with four straight kills. Three Nebraska errors helped Oregon to set point, 24-20, and another Cornhusker error ended the set and helped the Ducks to a 25-21 set win and a 2-0 lead at intermission.

The Ducks used a 3-1 stretch after an 18-18 tie to take a two-point lead late in the third set, but Nebraska fought back to take control with set point, 24-22. Oregon pulled even with back-to-back points, but a service error and a Cornhusker kill ended the set and sent the match to the fourth.

Oregon was able to find some separation from Nebraska late in the fourth set, scoring three straight points to break  a 19-19 tie. The Cornhuskers got within 22-21, but a kill by Taylor Agost and back-to-back points by Van Sickle clinched the set and the match, opening the Matt Ulmer era of Oregon volleyball in thrilling fashion.

Who Stood Out: Brooke Van Sickle had a great all-around match, setting a pair of career-highs with 11 kills and 22 digs while also adding three aces. 2016 third-team all-American Lindsey Vander Weide was the team-leader with 14 kills and she added 11 digs for her first double-double of the season, while sophomore Willow Johnson set a career-high with 13 kills on .387 hitting. Agost finished with 12 kills, and August Raskie joined Vander Weide with a double-double (21 assists, 14 digs). Sumeet Gill led the Ducks with seven total blocks, and fellow middle Ronika Stone added eight kills.

What it Means: The Ducks’ win over the Cornhuskers is their first over a top-five team since defeating No. 1 Penn State in four sets on Dec. 12, 2012. Ulmer emphasized the importance of showing up in big matches against elite competition, and he showed his composure with effective timeouts and adjustments to guide Oregon to its first-ever VERT Challenge victory.

Up Next: Oregon will seek its second win over a top-five team in as many days on Saturday when the Ducks take on No. 1 Texas at 4:30 p.m. PT to close out the VERT Challenge.