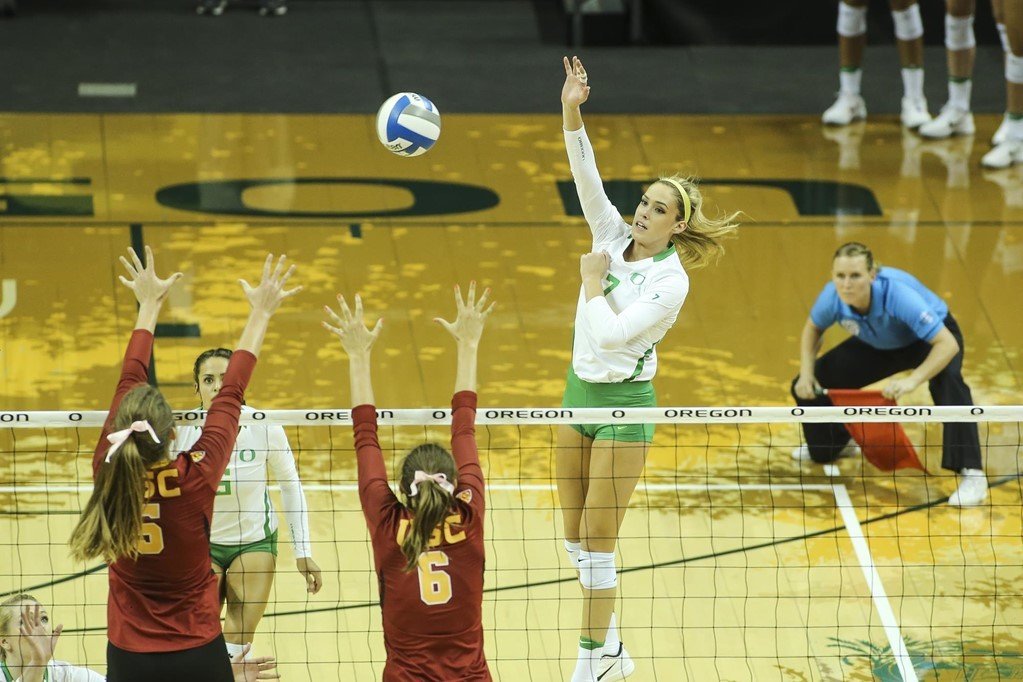 The USC Trojans honored their seniors on Saturday night in the Glaen Center in the last home game of their careers, but couldn’t come away with a win as #18 Oregon won the match 3-1.

Even in the first set, which they lost, the Ducks still hit .341, but USC came out even hotter swinging at a .395 clip as they took an early lead. Alysa Ford had 5 of her 8 kills for USC in set 1, including the deciding 25th point.

But as she cooled off, Stone heated up in the second frame where she grabbed 6 kills of her own to flip the scoring.

From there out, Oregon dominated the rest of the game, hitting .419 and .520 in the last two sets for the win.

How It Happened: After falling in a tight first set, Oregon (19-8, 12-6 Pac-12) outlasted USC (18-11, 10-8 Pac-12) in the second set and then used multiple long scoring runs in each of the final two sets to dominate down the stretch and leave Los Angeles with a four-set victory. The win keeps the Ducks mathematically in the hunt for the Pac-12 title and helps to strengthen their postseason resume entering the final week of the regular season.

The Ducks used a balanced and efficient attack to down the Trojans, hitting .406 as a team, their second-highest mark of the season, while holding the Trojans to a .194 attack percentage. Ronika Stone led the Ducks in kills for the second straight night, putting down 14 while hitting .458. Taylor Agost was right behind with 13 kills on a .433 mark, Jolie Rasmussen added 12 (.296) and Lindsey Vander Weide recorded 11 (.429). Maggie Scott paced the offense with 30 assists and two aces, and Amanda Benson dug a game-high 17 balls.

Set 1: The Trojans were able to build an early lead and sustain it for the bulk of the set, going ahead 9-6 early and then 20-17 to force the Ducks into a timeout. Oregon responded out of the break, pulling even at 20-20 with a Stone kill, an August Raskie ace and a USC error. The Trojans came back with two straight, though, and then held off the Ducks over the final few rallies to win the opening set, 25-23. Stone put down five kills on seven swings to lead the Ducks, and Vander Weide added four.

Set 2: After USC got out to a 6-2 lead, a 5-1 Oregon run tied the set, 7-7, with Rasmussen contributing an ace. Tied at 16-16, a Ducks’ service error put the Trojans up, but kills by Agost and Stone helped Oregon take a 20-19 lead and prompt a USC timeout. Leading 23-21, a Rasmussen kill gave the Ducks set point but USC rallied with two straight to pull within one, forcing Oregon’s second timeout. Stone capped a stellar set with another kill to win the set for the Ducks, 25-23, and pull the match even at intermission. Stone finished the set with six kills while Agost had four, and Rasmussen tallied her 19th service ace of the year.

Set 3: An early 6-0 run by the Ducks gave them a 7-2 lead at the Trojans’ first timeout. Oregon was able to put together another strong stretch, outscoring USC 7-2, to take control of the set at 17-9. Back-to-back kills by Rasmussen and Agost extended the Ducks’ lead to 21-12 when USC burned its second timeout, and the Ducks closed the set on a 7-1 run to win, 25-13, and go up 2-1 in Los Angeles. Agost and Rasmussen each put down four kills to lead the Ducks to a .419 hitting percentage.

Set 4: The fourth and final set was in the Ducks’ control from the start after they opened on a 6-1 run. Oregon later extended its lead to 12-5 with three straight kills, and Stone’s 14th kill pushed that lead to 17-9. USC cut the lead to five at 17-12, but Oregon rattled off an 8-2 stretch to close out the set, 25-14, and the match. Four kills on six swings by Agost led the offense, three other Ducks added three and Marine Hall-Poirier came on to record an ace in the final stretch. Oregon hit an astounding .520 with only three errors in the final set, and Scott tallied both of her aces.

What It Means: After falling to first-place UCLA (14-4 Pac-12) on Friday night, the Ducks remain in play for the Pac-12 championship two matches down with three to go. Washington (13-4), Stanford (12-5) and Utah (11-6) are also still in contention with all three set to play on Sunday, including a match-up between the Huskies and Utes. The Ducks got back to their winning ways on the road Saturday after dropping their first match away from home on Friday, improving to 8-1 on the road this season and 7-1 in conference play.

Balanced Attack: The Ducks’ offensive attack was impressive all night long, but especially during the final two sets. Seven different players had kills in the third-set win, and five Ducks had double-digit kills in the incredibly efficient fourth set. Kacey Nady (7 kills, .429) and Lauren Page (6 kills, .500) contributed to the offensive attack in addition to the four Ducks with double-digit kills. Oregon’s .406 hitting percentage is second this season only to the .471 mark the Ducks put up on Murray State on Sept. 2. Oregon recorded a sideout percentage of 78 percent (11-of-14) in each of the final two sets.

Up Next: Oregon enters the final week of the regular season with two conference road matches remaining. The Ducks will travel to Palo Alto to take on Stanford on Wednesday at 7 p.m. before wrapping the regular season at Oregon State on Friday at noon. Both matches will be broadcast on Pac-12 Networks. The NCAA Tournament field will be announced on Sunday night at 6 p.m.

Ruddins put up 10.0 points with seven kills and five blocks (one solo). Pizzasegola dished out 18 assists and had three digs. And Whittingham finished with 13 digs and three assists. On Senior Night, it was freshman outside hitter Khalia Lanier who led the USC offense with 12.5 points on 12 kills. She also had eight digs and a block.

The Ducks had four players in double digits for kills led by Ronika Stone who had 14. Taylor Agost scored 13 kills; Jolie Rasmussen had 12, and Lindsey Vader Weide had 11. Amanda Benson put up 17 digs.

After six first-set ties, the Trojans broke away for a 10-7 lead on kills by Abercrombie, Lanier, and Dunn. USC coasted to a 20-17 lead but Oregon scored three straight to knot the score at 20-all. Lanier and Ruddins logged back-to-back kills to put the Trojans back ahead for good. Withers’ kill gave USC set point before Ford cleaned up the 25-23 win to give the Trojans a 1-0 lead in the match.

Despite an early 6-2 lead in the second set, the Trojans found themselves in a back-and-forth battle through the belly of the frame. USC went ahead by two at 14-12 on a Withers kill but was caught in the eighth tie of the set at 16-all. The teams traded points until back-to-back kills by Stone put Oregon ahead for good at 21-19. Ruddins’ solo block of Nady pulled the Trojans within a point at 24-23, but Stone went down the line for the final kill of a 25-23 Oregon win.

Oregon scored back-to-back kills from Rasmussen to snag a 4-2 lead in the third set and never looked back. The Ducks built an eight-point lead at 20-12 on another Rasmussen kill. She finished with four and Oregon got another four from Agost in a .419 hitting performance that netted the Ducks a 25-13 win and a 2-1 lead in the match. The Ducks raced out to a quick 5-0 lead in the fourth set and were never threatened as they ran away with a 25-14 win to complete the four-set victory.

Up next, the Trojans head to the Palouse to face Washington State on Wednesday, Nov 23. USC and WSU will meet at 7 p.m. PT at Bohler Gym in Pullman, Wash. The Trojans and Cougars will be streamed on Pac-12.com/live. The Women of Troy will then close the regular season against crosstown rival UCLA at Pauley Pavilion on Saturday, Nov. 26. The Trojans and Bruins will meet at 5 p.m. PT and be shown live on Pac-12 Los Angeles.

USC fell to 52-12 in all-time meetings with Oregon. The Ducks have won at Galen Center in three of their last five visits.
The Trojans fell to 9-9 at Galen Center. The nine losses are the most in a single season at the venue since it opened in 2006. Previously, USC had lost eight at home in 2014.
Freshman OH Khalia Lanier recorded her 27th double-digit points match of the season.
Senior libero Taylor Whittingham registered her 25th match this season in double digits for digs (13).
Whittingham’s 13 digs gives her 1,686 career digs and puts her within 17 digs of third place in USC’s all-time record books (Katie Haller, 1990-93; 1,702 digs).