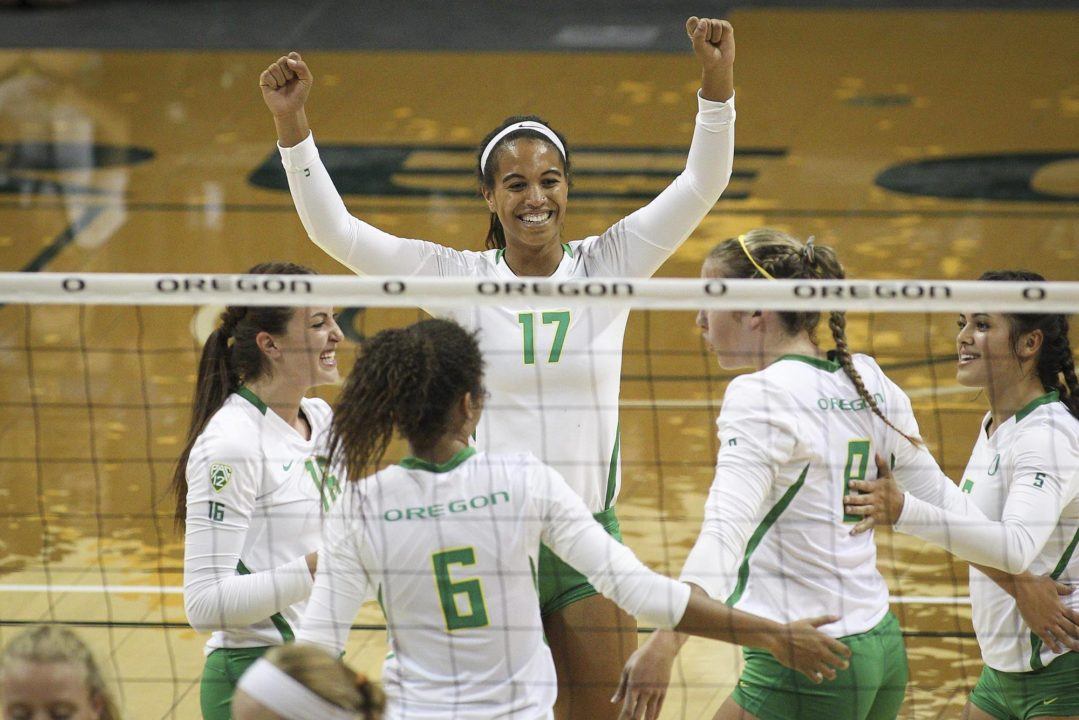 A diverse attack for the 19th-ranked Oregon Ducks led them to a 3-1 win over in-state rivals Oregon State. Archive Photo via Oregon Athletics

The 19th-ranked Oregon Ducks finished their regular season on Saturday with a rivalry win against Oregon State in a matchup dubbed ‘the Civil War.’

“My expectations were and are still high,” Oregon head coach Jim Moore said of his team going into the postseason. “We have as good a shot as anybody of going a long ways. We just have to show up and play.”

Oregon struggled offensively in the first set, hitting just .051, but they were able to keep the game close early by holding Oregon State to just an .054 hitting percentage of their own.

That gave the Ducks confidence that if they could turn their game around offensively, and reduce the 9 hitting errors they had in the first set, that this was their game to lose – and that’ just how things played out. Oregon hit .387, .438, and .371, respectively, in the last 3 sets to put the Beavers away in a 3-1 result. While Oregon State’s offense also improved (.242, .167, .138 in the last 3), they couldn’t keep pace with Oregon’s versatile offense that had 4 different players with double-digit kills.

Early on, the Ducks leaned on their star, Lindsey vander Weide, but she struggled in the first with 4 errors and just 2 kills.

In the 2nd set, though, they started to spread the offense out, with Ronika Stone getting 5 kills in the frame. She’s been playing very well as of late and has double-digit kills in each of Oregon’s last 4 contests.

Where Vander Weide struggled offensively, she found other ways to contribute to the Ducks’ success – including 3 service aces, 3 blocks, and 14 digs. That gave her an 11th double-double this season. August Raskie also grabbed a double-double with 23 assists and 13 digs.

Before the game, Oregon State honored its 5 seniors in their final home game of the season: Toner, Katelyn Driscoll, Rachel Buehner, Emilie Wilmes and Jessi Seumalo.