Northwestern Fights Early, But Falls to Penn State’s Outside Assault 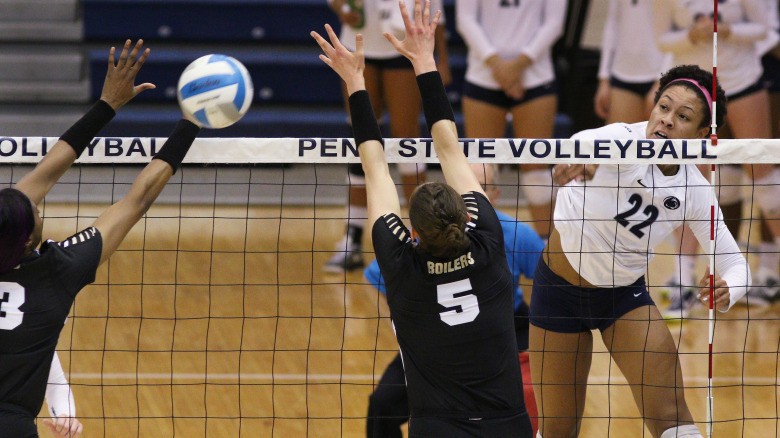 Behind a raucous Black Friday crowd in Rec Hall, the Penn State Nittany Lions thumped the Northwestern Wildcats 3-0 on Friday, though Northwestern played them tough in the first two sets before finally succumbing.

The ‘Cats jumped out to early leads in each of the first two sets before Penn State’s two junior outside hitters, Ali Frantti and Simone Lee, took over. In the 2nd, Northwestern led by as much as 10-5, at which point Lee had just 1 kill and Frantti none. Frantti would record 6 of the last 15 PSU points on kills.

The duo of Frantti and Lee were impressive, hitting a collective .361 and accounting for 20 of Penn State’s kills. Frantti led the team with 11 hammers, doing so for the sixth time in 2016. Lee, who totaled nine kills in the match, moved to fifth all-time in single season kills during the 25-point rally scoring era, with 435 total in 2016. Frantti had five digs, while Lee added four of her own.

Penn State hit at a blistering .379 clip in the match. Junior setter Abby Detering guided the offense with 34 assists, seven digs, and four kills of her own. She also boasted an impressive night from the service line, tying her career-high four aces.

Junior middle blocker Haleigh Washington finished third on the team in kills, posting eight on .538 hitting. She added three blocks, good for second on the team. Redshirt freshman Tori Gorrell tacked on six kills and a trio of blocks as well. Junior opposite Heidi Thelen added five kills and a team-best four blocks.

PSU and Northwestern both jockeyed for position early, with neither team really taking control in the early going. A 4-2 run in the Wildcats’ favor made the score 16-12, when Penn State used its first timeout. Out of the break, PSU scored four of the next five points, with kills from Frantti, Lee and Washington forcing NU’s second timeout as the Wildcats led, 17-16. The break didn’t faze Penn State, as Detering tallied a kill the next play and Washington posted a service ace for an 18-17 lead, forcing the Wildcats’ second timeout. Northwestern tied the set out of the break before taking a brief lead. Gorrell and Lee posted consecutive kills, and Northwestern would never lead the set again. NU fended off one set point before Frantti sealed the deal with a kill, 25-23.

Northwestern proved tricky again in the second set, as a tough block from the Wildcats helped lead the visitor to a 9-4 lead. Penn State called for time and rallied, stringing together an impressive 7-3 run, capped by a kill from Frantti to close the gap to one at 12-11. Northwestern called its first timeout, and found its footing before a 5-0 Nittany Lion run gave PSU a 17-16 lead. The teams tied six times afterwards, the last coming at 22-22. A kill from Gorrell gave Penn State the lead that would hold, before a pair of kills from Frantti closed the second, 25-23.

Penn State rolled out of the gate in the third, with a 4-1 burst to start the frame. Northwestern called for its first timeout, but would never lead the set again. Kills from Lee, Detering and Gorrell opened the gap to four at 13-9, leading to the second Wildcat timeout. Out of the break, Penn State took four of the next six points, with a pair coming on combo blocks by Thelen and Gorrell. Senior defensive specialist Laura Broerman served the final three points, as a kill from Lee and a handling error from Northwestern concluded the final frame, 25-16.

– No. 15 Penn State defeated Northwestern in three sets (25-23,25-23,25-16) Friday evening.
– The win improves Penn State’s overall record to 21-9 and Big Ten record to 13-6.
– Five Nittany Lions recorded five or more kills in tonight’s match. Junior Ali Frantti led the offense posting 11 kills. Lee (9), Washington (8) Gorrell (6) and Thelen (5) each hit the benchmark as well.
– The Nittany Lions out-blocked the Wildcats in tonight’s match 6.0-4.0. Four Nittany Lions had multi-block nights. Thelen led the team with four, while Washington (3), Gorrell (3) and Frantti (2) each had multiple stuffs as well.
– Penn State hit .379 on the night. It marks the 19th time that PSU has hit over .300 this season.
– With her seventh kill of the night, junior Simone Lee surpassed Deja McClendon for fifth place in single season kills during the 25-point rally scoring era.
– With 11 kills in the match, junior Ali Frantti is just now 64 kills shy of becoming the 26th member of Penn State’s 1,000 kill club.

Simone Lee, junior outside hitter: Lee posted nine kills and four digs in the contest. With her seventh kill of the night, Lee surpassed Deja McClendon for fifth place in single season kills during the 25-point rally scoring era.

Ali Frantti, junior outside hitter: Frantti led the team in with 11 kills. It is the sixth time this season she has led the team in kills, the second match in a row posting double digit kills and the tenth such match this season. She also finished second on the team in digs, posting five.

Abby Detering, junior setter: Leads the team in assists for the 24th time this season, recording 34. It marked the 16th match Detering has posted 30 or more assists. She also added a career-high-tying four aces, which she set at Rutgers earlier this season. She added seven digs and four kills.

UNIVERSITY PARK, Pa. – Northwestern took No. 15 Penn State to the wire in the first two sets, but the Nittany Lions prevailed for a three-set sweep at home Friday night.

Symone Abbott had a match high 18 kills, and Sofia Lavin was second with 12 of her own. Lavin hit .500 for the match.

Junior setter Taylor Tashima nearly had her sixth double-double of the year, handing out 32 assists and notching eight digs.

Northwestern had 44 kills to the Nittany Lions’ 43.

The Wildcats led late in both the first (19-18) and second (20-19) sets, but the hostile Penn State crowd helped put the hosts on top going into intermission.

The 2016 season wraps up tomorrow night when the ‘Cats take on Rutgers at 6 p.m. in Piscataway, N.J.