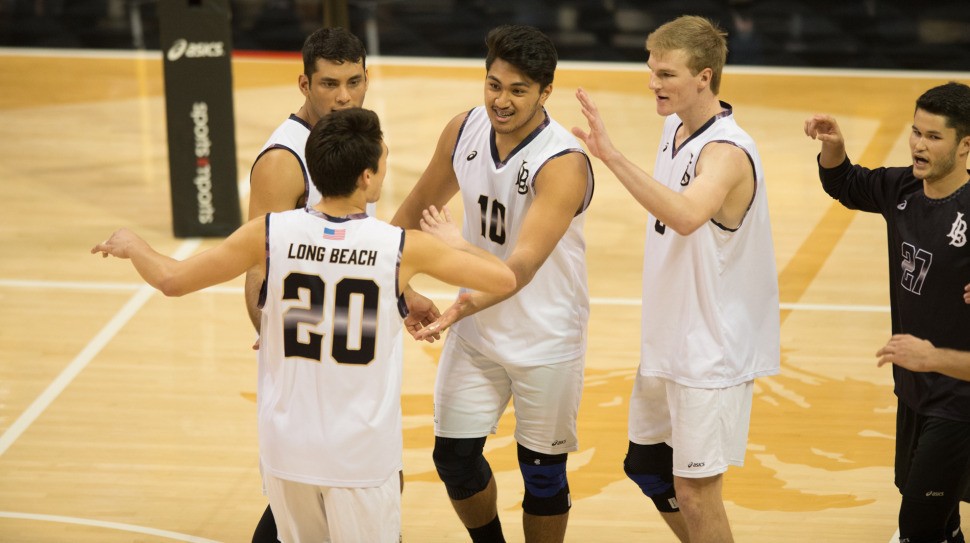 The 2nd-ranked LBSU Beach had their second-best offensive output on the season in a 3-0 sweep of USC on Friday. Archive Photo via LBSU Athletics

The 2nd-ranked LBSU Beach topped #14 USC in straight sets on Saturday in front of over 2,000 fans at the Walter Pyramid. That’s an 8th-straight win for LBSU who still control the MPSF conference midway through the season.

For USC, the loss halts two weeks of momentum for the team that semed to finally be finding its groove. The team started the season 3-9 but had run off 3 straight wins, including beating ranked teams Stanford and Pepperdine, before being hammered by LBSU. The Trojans struggled without Lucas Yoder, the defending VolleyMob National Player of the Week and national leader in kills and points, who sat out the game with an abdominal strain.

The result was only an .096 offensive output for USC, while Long Beach State hit .524. When USC has played well this year, it’s been relying largely on a small core of players – a strategy that becomes unstable if one of those players, and arguably the most important of those players, gets hurt.

Long Beach State played a tight 9-man rotation int he win with TJ DeFalco leading them with 14 kills on .550 hitting percentage. Amir Lugo-Rodriguez had 8 block assists – part of 11.5 block team effort for LBSU, as compared to just 3 for USC.

This is not only the second time that the Beach have hit over .500 this season, it’s the second time they’ve done it against a ranked opponent – in January, they hit .534 in a 3-set win against Hawaii. Nobody else has achieved that plateau in 2017 against a single top 15 team, though CSUN hit .557 against USC early in the year, before the Trojans were ranked.

LBSU plays UC Irvine and UCSD next week again in the Walter Pyramid, while USC travels to Hawaii for a pair against the Rainbow Warriors.

The Beach have now won eight consecutive matches to improve to 15-2 on the year and 11-1 in the MPSF, while posting a perfect 6-0 record at home, and going 8-0 in the month of February. Meanwhile, the Trojans fall to 6-10 overall and 5-8 in conference play.

Long Beach State came out firing on all cylinders tonight as it never hit below .400 in any of the three sets. The Beach knocked down a total of 38 kills on 63 attempts, while committing just five errors to hit .524 in the match. Additionally, their defense was on point as the 49ers limited the Trojans to just .096 (26-19-73) hitting in the contest.

“I’m just glad they came out with a significantly better sense of competitiveness and sense of urgency to play every point here tonight,” Long Beach State head coach Alan Knipe said. “There’s no doubt that a lot of the little things went our way tonight unlike the beginning of our match on Wednesday night where a lot of things didn’t go our way in the first set.

“The lesson learned for us is to just keep pressuring and good things usually happen. I just like the response by the guys to come out and be ready to go right out of the gate for whatever they are going to bring at us.”

The Beach kept the pressure on the Trojans throughout all three sets as they took advantage of 11 USC service errors, four blocking errors and six reception errors.

Sophomore setter Josh Tuaniga did a good job of pacing the 49ers’ offense as he dished out 33 assists, while contributing a pair of kills himself. He also tacked on two service aces, while adding five blocks and four digs.

TJ DeFalco led the Beach in scoring for the sixth-straight match as he tallied 14 kills while hitting .550 for his 15th double-figure contest of the season.

LBSU’s offense also got a boost from Kyle Ensing’s nine-kill effort on 16 attempts without an attack error. Ensing hit .562 in the match and added five total blocks to help lead the Beach at the net along with senior middle blocker Amir Lugo-Rodriguez who posted eight block assists as the 49ers finished the match with 11.5 total team blocks.

Senior libero Andrew Sato once again set the tone for the backrow with nine digs. Defensively, the Beach owned a reception percentage of 97.1 percent as they only committed one reception error in the contest.

With the offense going strong and the defense playing its game, the Beach managed to roll over the Trojans never allowing them to score more than 17 points in a single frame.

The first set was the closest as the two teams battled back-and-forth early on, but it did not take long for LBSU to break the 10-10 tie and go on a 6-0 run and never look back. Following the run, the Beach led by as many as nine points (21-12) before taking set one by a score of 25-17.

Long Beach State started the second set on a 4-0 run and never allowed the Trojans to come closer than three (8-5) before the 49ers broke the game wide open and cruised to a 25-12 victory.

The third set was much like the first. The two teams fought through several early ties, but Long Beach State broke the 9-9 deadlock and took a 15-11 lead forcing a timeout before running away with the game, 25-15.

USC’s scorers were all held to single digits as Lucas Lossone and Ryan Moss led the team with five kills apiece. Gert Lisha tallied 21 assists, while Lossone and Blake Markland each notched three digs to lead the Trojans.

Long Beach State returns to action on Wednesday, March 1 when it hosts No. 7 UC Irvine at 7 p.m. in the Walter Pyramid.

Ryan Moss and Lucas Lossone topped USC with 5 kills each, with Moss hitting .455.

Kyle Ensing added 9 kills for the 49ers while hitting .562 and he had 5 blocks. Amir Lugo-Rodriguez had 8 blocks.

USC next travels to play at No. 4 Hawaii for a pair of matches, the first one an MPSF contest on March 2 and then a non-conference match on March 3.