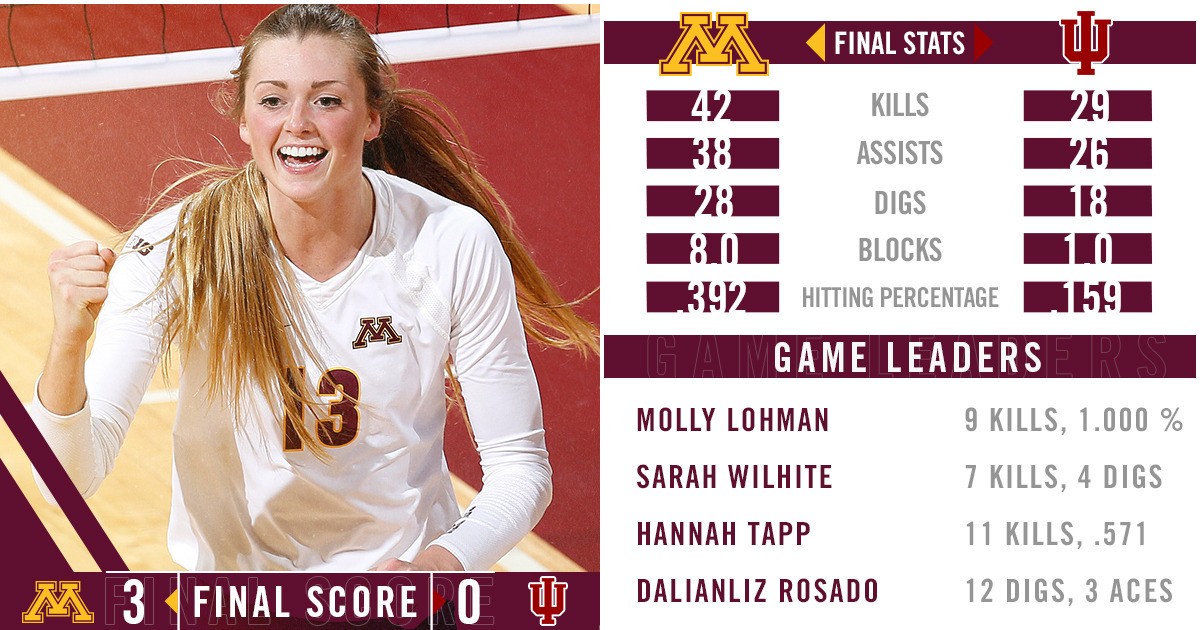 This was just the first match of Indiana’s hard weekend. Although their schedule is difficult, with nine Big Ten conference competitors in the AVCA Top 25, this weekend they’re hosting No.2 Minnesota and No. 3 Wisconsin on Saturday.

Minnesota out-blocked Indiana 8-1, and out dug them 28-18. Gopher player Molly Lohman had a perfect 1.000 kill percentage.

The No. 2 University of Minnesota volleyball team earned a 3-0 win over Indiana, tonight in Bloomington, Ind. With the win, the Golden Gophers improve to 11-1 overall and 3-0 in the Big Ten.

Minnesota hit .392 in the match, while it held Indiana to just a .159 efficiency. The Gophers tied a season-best seven aces in the win. Minnesota also held a 28-18 dig advantage and out-blocked the Hoosiers, 8-1.

Hannah Tapp had 11 kills and hit .571, while Molly Lohman had nine for a perfect 1.000. Dalianliz Rosado had a match-best 12 digs and three aces. Samantha Seliger-Swenson had 35 assists, two aces and two digs. Alexis Hartand Sarah Wilhite had eight and seven kills respectively.

Minnesota travels to West Lafayette, Ind., to face No. 14 Purdue Sunday. The match is televised live on ESPN2.

Set 1: Minnesota opened the contest with a 25-17 set win. Tied at 6-6, Minnesota rattled off a 3-0 run capped off by a Seliger-Swenson ace as the Gophers took an early 9-6 lead. Indiana came back to cut the lead to one at 9-8, but Minnesota went on another 3-0 run to go up 12-8, which forced Indiana to call a timeout. Minnesota continued to add to its lead when Rosado had an ace and a 15-10 Gopher advantage. After an Indiana attack error and an 18-11 Gopher lead, the Hoosiers called its second timeout. A Wilhite kill put Minnesota up 20-14. The Gophers later closed out the set off back-to-back errors by Indiana, one service error and one attack error, for a 1-0 lead.

Set 2: The Gophers hit an impressive .545 in the second set, pacing a 25-15 set win. Minnesota had 14 kills in 22 attempts and just two errors. After trading points, Minnesota earned a 10-7 lead off back-to-back kills from H Tapp. An Indiana attack error gave Minnesota a 10-7 lead as the Hoosiers called their first timeout. Indiana cut the Gopher lead to 11-10, but the Gophers went on a 6-1 run and a 17-11 lead as Indiana used its second timeout. The Gophers came out of the break and added to their lead with a Hart kill before Indiana earned a sideout. A P Tapp kill put the Gopher lead to 20-12. Wilhite added a block for set point, while the Gophers ended the set with a P Tapp kill.

Set 3: Minnesota hit .423 in the third set and won, the match off a 25-17 third set win. After a 7-4 Gopher lead, Indiana came back to tie the set at 8-8. After the two teams tied at 12, Minnesota had a P Tapp block and a Rosado ace to put the Gophers up, 14-12. The two-point lead would be all the cushion the Gophers needed to close out the set. A P Tapp kill put Minnesota up, 17-14, while she later added the Gophers’ seventh ace of the night for a 19-15 lead. The Hoosiers called a timeout but Minnesota added to its lead for a 20-15 advantage. H Tapp and Wilhite combined for a block at 22-16, while a solo H Tapp block put the match at set point. H Tapp closed out the match with her 11th kill of the game and a 3-0 sweep.

Up Next: Minnesota will have another road game on Sunday, facing No. 14 Purdue at 12:30 pm.

The second set started in a similar way with Hoosiers holding leads of 2-1, 3-2, 4-3, 6-5 and 7-6. With Indiana up 7-6, the Golden Gophers used a 5-0 scoring run to go up 11-7. The Hoosiers fought back with three straight points on a kill from redshirt freshman Kendall Beerman and back-to-back kills by senior Jazzmine McDonald to cut the Minnesota lead to 11-10.

The final set of the match featured six ties as the Hoosiers kept with Minnesota deeper into the set, scoring their 14th point on a kill from Hammond to cut the Minnesota lead to 16-14.

Up Next: The Hoosiers will face No. 3 Wisconsin Saturday at 6 pm.